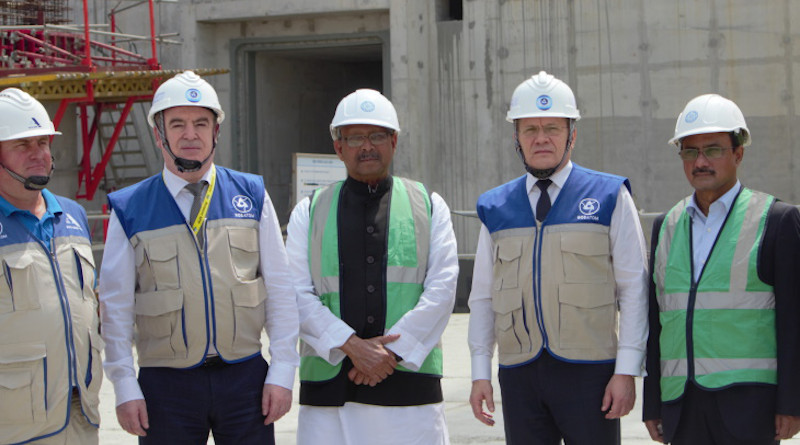 A number of documents have been signed between Russian state nuclear corporation Rosatom and the government of Bangladesh that will enhance existing bilateral cooperation in the use of atomic energy for peaceful purposes. Russia is currently constructing a two-unit nuclear power plant at Rooppur, Bangladesh.

A package of documents was signed yesterday in Dhaka following a meeting between Rosatom Director General Alexey Likhachov and the Prime Minister of Bangladesh, Sheikh Hasina. Likhachov also held meetings with Bangladeshi Minister of Foreign Affairs Abulkalam Abdul Momen, and the Minister of Science and Technology, Yeafesh Osman.

The parties signed a protocol to amend the intergovernmental agreement between the governments of Russia and Bangladesh on the construction of nuclear power plants in Bangladesh. The new protocol establishes the right of Bangladesh to engage Rosatom on a long-term basis to assist in the operation, maintenance and repair of units 1 and 2 of the Rooppur plant, as well as to supply the equipment, expendable materials, spare parts and to provide training for maintenance crews in the course of plant operations. This, Rosatom said, will enable it to carry out maintenance, operational support and repair of the Rooppur plant throughout its entire life cycle.

In addition, a package of appendixes to the contract for the supply of nuclear fuel for the Rooppur plant was signed between Rosatom subsidiary TVEL JSC and the Bangladesh Atomic Energy Commission (BAEC). The contract is valid until the end of the operational lifetime of both units at Rooppur.

Russian state nuclear corporation Rosatom in February 2011 signed an agreement for two 1000 MWe-class reactors to be built at Rooppur for the BAEC. The 1200 MWe VVER-1200 reactor model was subsequently selected for Rooppur, on the eastern bank of the river Ganges in Pabna district about 160 kilometres northwest of Dhaka. The initial contract for the project, worth USD12.65 billion, was signed in December 2015. The general contractor for the project is AtomStroyExport, Rosatom’s engineering subsidiary. First concrete for the nuclear island of unit 1 was poured in November 2017, while that of unit 2 was poured in July 2018. Rooppur unit 1 is scheduled to begin operation in 2023, with unit 2 following in 2024.

During his visit to Bangladesh, Likhachov visited the construction site of the Rooppur plant. “The construction has gained considerable pace,” he said. “It is gratifying to see that our specialists have the opportunity to live fully, engage in leisure activities and receive medical care at a specially constructed district.”