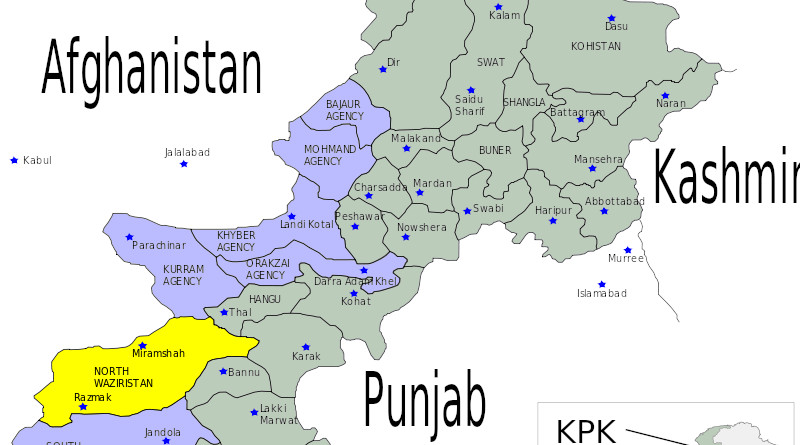 Those involved in anti-terrorism operations ultimately learn to accept the inevitability of lives and limbs being lost in gunfights and bombings. Accordingly, the Pakistan army will soon get over the shock of last week’s encounter involving terrorists belonging to Muqami Tehrik-e-Taliban (MTT) led by Hafiz Gul Bahadur in the Mama Ziarat area of Datta Khel in North Waziristan in which one officer and three soldiers were killed while another was seriously injured.

That 10 terrorists were killed in this operation may be of some solace to the comrades of the deceased. But since the news report on this incident in ‘Dawn’ mentions that “Datta Khel is close to the Afghan border, with most of its neighbourhoods yet to be cleared of militants in the wake of Operation Zarb-i-Azb,” it clearly proves that the Pakistan army’s claim of  this area being “cleared” of all terrorists was untrue. So, won’t this false declaration haunt the kith and kin of the slain officer and soldiers forever.

Readers may recall that in 2004, just two weeks after Operation Zarb-e-Azb had commenced, Maj Gen Asim Saleem Bajwa, who was Director General (DG) of Pakistan army’s Inter Services Public Relations (ISPR) had told journalists, “Once we are done with the operation in North Waziristan, there won’t be a single terrorist.” Two years later he confirmed that “security forces have cleared major towns of Miranshah, Mir Ali, Datta Khel, Boya and Degan in North Waziristan, which were (once) considered strongholds of terrorists.” But the Mama Ziarat encounter belies the DGISPR’s claims and this isn’t the first such incident in this area.

On June 7 last year, three officers and a soldier of Pakistan army were killed by a roadside bomb planted by terrorists in the Kharqamar area of North Waziristan, pushing the security forces’ casualty figures in a single month to a whopping 10 dead and 35 injured. As per media reports, after this incident even ISPR had stated that “terrorist activities in North Waziristan have increased lately,” but unfortunately, the military hierarchy failed to see the red flag raised by its own media wing and failed to take any concerted action to bring the perpetuators to book.

To find the answer, let’s return to Pakistan army’s Operation Zarb-e-Azb. After demystifying this much hyped military action, one finds that despite DGISPR’s famous “We are going after terrorists of all hue and colour” assertion, the truth was entirely different. Whereas, the Pakistan army did target terrorists who were orchestrating attacks within Pakistan, but terrorist groups that it considered to be the ‘good’ Taliban (groups targeting US led coalition in Afghanistan) were spared. Infact, BBC’s South Asia correspondent Andrew North literally cocked a snook at Rawalpindi by reporting this news under the witty caption, ‘All hues or some shades in North Waziristan?’

Rawalpindi has consistently denied this and cites its own substantial casualties as proof of having gone all-out after terrorists of “all hue and colour,” but this analogy is plainly illogical. The ISPR has claimed that nearly 3,500 terrorists had been ‘neutralised’ and more than 1,000 terrorists were apprehended during Operation Zarb-e-Azb. But the oddity is that not even a single terrorist amongst those killed or captured belonged to the Hafiz Gul Bahadur led MTT or the Haqqani network. If this is just a coincidence, then it certainly disproves all the time-tested laws of probability.

The Pakistan army may give an impression of being downright professional with no appetite for compromises. But the reality is that instead of using military means to subdue anti-national terrorist groups, it has a proclivity for ‘buying’ peace by making generous allowances to the belligerents in order to broker deals. Unfortunately, despite being repeatedly embarrassed by such ‘quick-fix’ deals and paying heavily in terms of lives its soldiers (as the Mama Ziarat incident illustrates), the Pakistan army doesn’t even seem to learn any lessons.

In 2004, under pressure from Washington, General Pervez Musharraf sent the Pakistan army into Waziristan to clear the Wana area in South Waziristan Agency of terrorists who were launching cross-border attacks on the US led coalition in Afghanistan. After several weeks of intense combat against foreign and local terrorists who were fighting under the leadership of Afghan war veteran Nek Mohammad, the Pakistan army claimed victory.

But surprisingly, rather than discipline this errant Taliban leader, the Pakistan army brokered a peace deal which came to be known as the ‘Shakai Agreement’, which was a complete sell-out. In return of a promise that foreign mujahideen would be handed over and cross-border attacks into Afghanistan will be stopped, Islamabad agreed to release Taliban prisoners, pay a sum of Rupees four crores as compensation to tribesmen for property damaged due to military operations and even to enable local terrorists to repay their debts to Al Qaida.

But immediately after signing the agreement in April 2004, Nek Muhammad made his intentions of reneging the same. Refusing to hand over foreign militants, he declared that his forays against US led forces in Afghanistan would continue and started killing tribal elders who had helped to negotiate the agreement. Embarrassed by his gall, the Pakistan army launched another operation against him in June 2004. But while it failed to subdue him, the US managed to give Musharraf a face-saving moment by ‘droning’ Nek Mohammad and allowing the Pakistan army to claim this ‘kill’.

(The irony is that the Shakai Agreement which was preceded by the unsoldierly spectacle of 11 Corps Commander Lieutenant General Safdar Hussain garlanding Nek Mohammad and having tea with the man responsible for the death of numerous Pakistan army personnel, didn’t even last two months.)

But within a year, Gul Bahadur walked-out of this agreement, accusing Rawalpindi of going back on its commitments and ordered his cadres to commence attacks on Pakistan army. This unnerved the Pakistan army and after desperate parleys, both sides once again agreed on a ceasefire in August 2007. But in the absence of any formal deal, an uneasy peace prevailed.

Having been once bitten by Pakistan army’s insincerity, Gul Bahadur kept his options open and joined other Taliban commanders of Federally Administered Tribal Areas (FATA) and the North-West Frontier Province (NWFP) to form the Tehreek-e-Taliban Pakistan (TTP) in December 2007. Baitullah Mahsud was elected to lead TTP while Gul Bahadur was appointed as ‘Naib Amir’ (deputy chief).

However, since Baitullah insisted on targeting Pakistan army, Gul Bahadur distanced himself from TTP and this earned him the goodwill of Rawalpindi. In early 2008, when Pakistan army launched an offensive against TTP, Gul Bahadur turned down Baitullah’s request to use the Ramzak area of North Waziristan Agency in order to strike the security forces. This generous display of solidarity by Gul Bahadur assisted in reviving the peace agreement in February 2008, and helped MTT to qualify as ‘good’ Taliban for Pakistan army.

Following its strategy of pitting terrorist groups against each other, Rawalpindi used its ‘assets’ within terrorist ranks to provoke Baitullah into attacking other warlords in Waziristan. But this plan totally misfired because rather than weaken terrorist groups through internecine intra-group clashes, it led to the Waziristan warlords (South Waziristan’s Mullah Nazeer, commander of the of Ahmadzai Wazir clan Taliban and North Waziristan’s Gul Bahadur, leader of the Uthmanzai Wazir and Daur clans Taliban) joining hands to form a united “Waziri alliance” named Muqami Tehrik-e-Taliban (MTT).

Gul Bahadur was chosen as chief of MTT with Nazeer Khan as his Deputy and this the new group gained much greater influence as it encircled Baitullah’s Mehsud tribe from the North, West and South. The MTT became Pakistan army’s darling since it served the overall interests of Rawalpindi. Internally, it gives Pakistan army the much-required ‘stick’ to keep TTP at bay in Waziristan and on the external front, the MTT’s close ties with the Haqqani network and common ideological objective of waging ‘jihad’ against US led coalition forces in Afghanistan will ensure that Pakistan has the requisite leverage to influence internal affairs in Afghanistan once US troops leave.

But will Pakistan army’s misplaced belief that it can win the war on terror by ‘buying’ peace with terrorist groups instead of taking them out, and that the ‘good’ Taliban can prove to be a more efficient alternative than diplomacy for achieving international political objectives remains a million-dollar question.

Tailpiece- On April 22, 2010, a Pakistan army convoy “carrying out a routine movement” was ambushed in Datta Khel area of North Waziristan in which eight soldiers lost their lives while 16 troopers were injured. The area in which this happened is controlled by Gul Bahadur’s right-hand man Maulvi Sadiq Noor and this act was blatant violation of Islamabad’s existing peace agreement with MTT, just as the latest killing of one officer and three soldiers at Mama Ziarat is.

But the Pakistan army didn’t punish Gul Bahadur then, and it isn’t likely to do so now. Without any fear of retribution, it’s but natural that the ‘good’ Taliban will continue bleeding the Pakistan army in order to keep Rawalpindi under pressure to continue with the existing peace agreements that allow terrorist groups full freedom to run their own writ in Pakistan’s border areas.

Home » The Cost Of ‘Buying’ Peace In Waziristan – OpEd

3 thoughts on “The Cost Of ‘Buying’ Peace In Waziristan – OpEd”