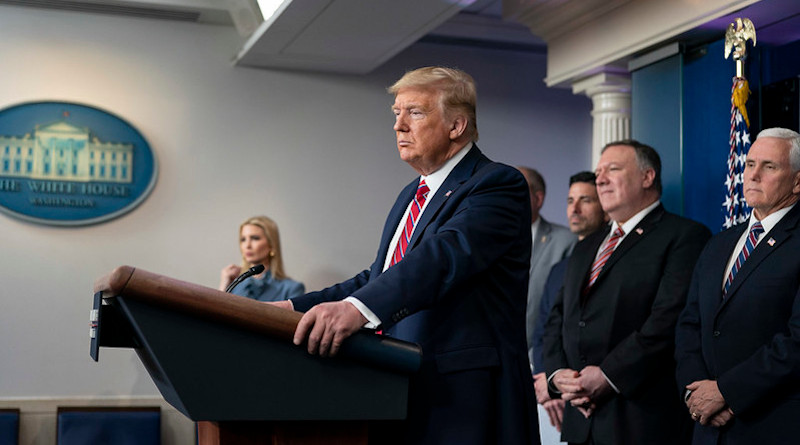 A general political and technological decoupling of the US and China is now appearing inevitable. The bitterness in their public discourse is all too visible.

Instead of providing leadership and promoting cooperation during a time of unprecedented global challenge, Washington and Beijing have got involved in a major quarrel that threatens to derail their already damaged ties. Just as shooting war is often triggered by minor events, a new Sino-American conflict is being set off by seemingly trivial issues, such as the assigning of blame for the origin of the coronavirus and the expulsion of journalists. On 18 March, the Chinese expelled more than a dozen American journalists covering Beijing for The New York Times, the Wall Street Journal and The Washington Post. This was the culmination of a process that began in mid-February, when five Chinese media outlets like Xinhua and CGTN TV were designated as “foreign missions” by the US.

The reference to the “China virus”, by President Trump is a convoluted story. It probably began with the Chinese, upset by Secretary of State Michael Pompeo’s repeated, and deliberate reference to the “Wuhan virus.” He made a wild allegation articulated by Chinese Foreign Ministry spokesman Zhao Lijian suggesting the virus may have been brought by US Army personnel who had participated in the World Military Games in Wuhan, at the end of October 2019. So, probably as a deliberate response, on 17 March, Trump tweeted about assisting industries affected by the “Chinese virus” and subsequently took to using the term on a regular basis. At a press conference the same day, US Secretary of State, Michael Pompeo, bluntly accused the Chinese of waging a “disinformation campaign” to shift responsibility. He said that the first government to be aware of the “Wuhan virus” was the Chinese. They, he said, should have alerted the world.

“The Chinese Communist Party had a responsibility to do this not only for Americans and Italians and South Koreans and Iranians who are now suffering, but for their own people as well.”

The trajectory of US-China relations has always been one of sharp ups and downs. After fighting a war in Korea in 1950, the two were engaged in a long Cold War till the US reached out through Nixon and Kissinger in the 1970s and embraced the PRC. Thereafter, the two operated as a quasi alliance against the Soviet Union, with the US helping China to enhance its military capacities to counter-balance the Soviets. Besides intelligence, the US helped China to enhance its military capability through technology transfers to the PLA. In the late 1980s, China got computers, sophisticated machine tools and its scientists and students were being trained in the US. Also — China got invaluable assistance in its space programme by American technicians and engineers.

After the Tiananmen massacre, the military part of the relationship between both the countries was constrained, but the commercial one boomed. Their information and technology dealings skyrocketed. The US helped China to enter the WTO and become a dominant world exporter and then it itself emerged as the largest trade partner of China. The US also realised the value of China beyond trade from the point of maintaining the world order — as a permanent member of the UNSC, promoting non-proliferation, peace keeping, humanitarian relief and fighting Islamic fundamentalism.

The 2015 NSS of the Obama Administration boasted that “the scope of our cooperation with China is unprecedented.” While making this claim, the US was aware of the fact that China often uses intimidation as a tool in resolving territorial disputes. Not forgetting its military modernisation, it did however emphasise the importance of the US “rebalance to Asia” which was pivoting on the Trans Pacific Partnership (TPP). But the bottom line was: “The United States welcomes the rise of a stable, peaceful, and prosperous China,” with whom it wanted to establish a “constructive relationship,” that could benefit both the countries and the world. The Obama plan to counter China was more laid back and sophisticated, based on using the TPP to tilt the economic balance against China, since the US was already by far the greater military power.

The succeeding Trump Administration upended these calculations by, first and foremost, walking out of the TPP. And then beginning an extended trade war with Beijing. Soon, it became clear that it was not just about trade. The 2017 NSS bluntly accused China and Russia of “attempting to erode American security and prosperity” and seeking to “shape a world antithetical to US values and interests.” The document repeatedly spoke of the need to advance US interests against “strategic competitors” in a range of areas — from diplomacy to science and technology.

Initial US tariffs in January and March 2018 on washing machines, solar panels, followed with steel and aluminum were universal. But after China, which was primarily targeted in this arrangement, retaliated, and the “war” began in its earnest.

By the end of 2019, the two sides had placed tariffs on $420 billion worth of each other’s goods, with China coming off worse because its exports to the US were far larger. But this time the US-China standoff was no longer just about tariffs. This became apparent when the US began a crackdown on Chinese technology companies. After giving ZTE, the Chinese telecom-maker an unexpected reprieve in April 2018, the US banned American companies from exporting to Fujian Jinhua Integrated Circuit — China’s leading memory chip maker — which collapsed thereafter. Under the NDAA for FY 2019, US agencies were barred from procuring equipment from Huawei, ZTE and three other Chinese companies. The legislation also imposed greater restrictions on the export of foundational technologies on national security grounds. A major target was the world’s leading telecom company, Huawei, which was said to be the global leader in 5G technology. The US has undertaken a global campaign to persuade friends and allies to avoid using Huawei’s 5G technology.

Despite all this, the two sides were able to work out a phase I trade deal, through which China would buy an additional $200 billion worth of US goods over and above the 2017 level. Besides, they would take measures to protect IPR of western companies. In turn the US would halve the tariffs it had imposed.

But everything has now been upended by the coronavirus crisis. The damage to the Chinese economy, and the possibility of the US going into recession could be a further setback to the Chinese recovery, given that 19 per cent of its exports go to the US. This would not only affect the Chinese, who would fail to meet their export targets, but also the US, who may not simply have sufficient goods to export to China. To cap this now, is the reason for their increased bitter relationship arising from the charges being traded on the origins of the coronavirus.

Interestingly, a new manifestation of the Sino-American rivalry is that the two sides are racing to see that who succeeds first in developing a vaccine for the virus. The US National Institutes of Health initiated a phase 1 clinical trial of a vaccine for Covid19 on 16 March in Seattle. The vaccine called mRNA-1273 was developed by the National Institute of Allergy and Infectious Diseases (NIAID) and the Biotech company Moderna. The next day, US Secretary of Defence Mark Esper, announced that the US military, too, was working on vaccines for Covid19. His briefing followed his visit to the Army Medical Research Institute of Infectious Diseases. Another military institute, the Walter Reed Army Institute of Research has begun to work on a vaccine.

Meanwhile the Chinese military’s Academy of Military Medical Sciences (AMMS) has been ordered to join the race to develop the first vaccine. Major General Chen Wei, a top virologist, would lead a team alongside CanSino Biologics company. Of course, other research teams around the world are also trying to develop the treatment. But as a South China Morning Post report cites an expert saying that the Chinese leadership would feel they had “lost their face” if the Americans happen to beat them in this.

The blame game being played between the US and China is not merely about scoring diplomatic points. It is about trying to evade blame for serious acts of negligence. China must accept blame for gross dereliction of its duty for allowing the virus to spread without raising an international alarm for almost two months.

Meanwhile China has stepped up aid efforts to European countries hit by the virus. Beijing is, first, seeking to position itself as a “responsible” country. Second, it is acting to offset what it believes is a campaign launched by the US to blame China for the global public health and economic catastrophe arising out of Covid19. Third, it is a signal that its economy, though hit by the shut-down, remains powerful, is on the mend, and can play a positive, if not key role in aiding other countries hit by the virus to recover. Europe, it needs to be emphasised is the key target of the Belt and Road Initiative.

Kurt Campbell and Rush Doshi noted recently in Foreign Affairs that as Washington appears to falter, “Beijing is moving quickly and adeptly to position itself as the global leader in pandemic response.” Despite its responsibility in enabling the outbreak to get out of control, Beijing’s actions and the US’ lassitude, could fundamentally alter the US’ position in global politics and the contest for leadership in the twenty-first century.”

Whatever may be the case, there is no doubt that a general political and technological decoupling of the US and China is now appearing inevitable. The bitterness in their public discourse is all too visible. In the area of technology, decoupling ICT had already become an important driver of US policy in 2018-19. To this can now be added pharmaceuticals and medical equipment, and, no doubt, other areas in which the US can no longer trust their Chinese linkages. The US-Chinese relationship is headed towards a fracture if not failure.

This is not good news. The US-China relationship has been a factor for the stability and the consequential prosperity of Asia. Their estrangement will have negative consequences, especially since their long and intense engagement till now will ensure that the decoupling is messy and extended.

Home » US And China: Engagement, Strategic Competition And Beyond – Analysis