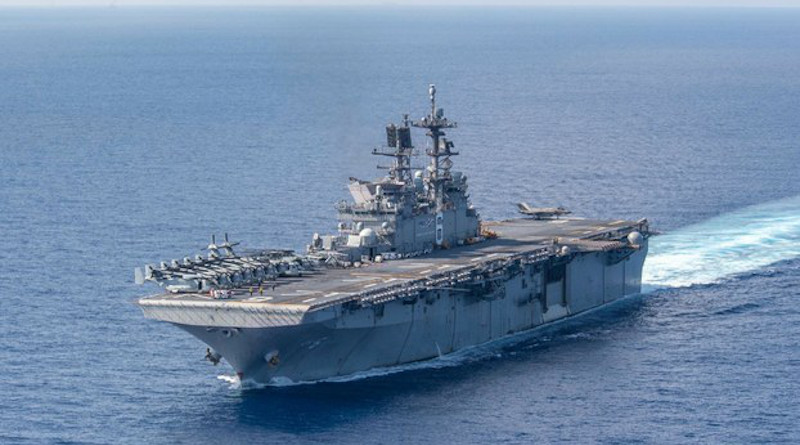 The United States has sent an amphibious assault ship and a guided missile cruiser to the site of an ongoing survey by a Chinese ship operating in Malaysian waters, the U.S. military said Tuesday, signaling Washington’s support for other countries in the region as China presses its advantage in the middle of the COVID-19 pandemic.

Lt. Cmdr. Nicole Schwegman, spokeswoman for U.S. Indo-Pacific Command, confirmed that the USS America and USS Bunker Hill have been deployed in the South China Sea.

“Through our continued operational presence in the South China Sea, we are working with our allies and partners to promote freedom of navigation and overflight, and the international principles that underpin security and prosperity for the Indo-Pacific,” she wrote in an email. “The U.S. supports the efforts of our allies and partners to determine their own economic interests.”

Schwegman did not state the exact location of the warships but satellite imagery from Tuesday provided by the European Union through the EO Browser service confirms that the USS America is less than 60 nautical miles from the West Capella, a Malaysian-contracted oil exploration ship. In close proximity, there are a combination of Chinese survey vessels, coast guard, and maritime militia ships, according to vessel tracking software.

The Chinese survey vessel, named the Hai Yang Di Zhi 8, arrived in Malaysian waters on April 16 and is surveying an area within Malaysia’s exclusive economic zone, between the West Capella and Malaysia’s coast.

Vessel-tracking software shows that the survey is being conducted in a back-and-forth manner over an area about 150 nautical miles wide, and creeping ever-closer to Malaysia’s Sarawak state.

Zack Cooper, a research fellow at the Washington-based think tank the American Enterprise Institute said there were many possible reasons for the U.S. to have sent warships to the area of the survey ship but it was unlikely that Malaysia had asked for the U.S. to intervene.

“I don’t think the United States has any intention to directly engage on behalf of Malaysia, especially because Malaysia may not have asked for assistance and is not a U.S. treaty ally,” Cooper explained. “But it is useful for U.S. forces to be there to help monitor Chinese activities and show other claimants that China is not the only outside military capable of operating in the South China Sea.”

The commander of the USS America Expeditionary Strike Group said that his forces had interacted with Chinese naval forces in the South China Sea this week.

“All our interactions continue to be safe and professional with them,” Rear Adm. Fred Kacher told Reuters by phone from the USS America.

China has said that the Hai Yang Di Zhi 8 is conducting normal activities and has accused U.S. officials of smearing Beijing. That followed statements from the U.S State and Defense departments strongly critical of China’s recent activities in the South China Sea, particularly the April 2 sinking of a Vietnamese fishing boat in a confrontation with a China Coast Guard ship.

The State Department accused China of exploiting other nations’ distraction over COVID-19 to expand its “unlawful claims” in the South China Sea.

The Hai Yang Di Zhi 8 is accompanied by China Coast Guard (CCG) and People’s Armed Forces Maritime Militia ships. Two CCG ships, the Zhongguohaijing 4203 and 1105, are sailing alongside the Hai Yang and shadowing supply ships supporting the West Capella, according to vessel-tracking software. Another CCG ship, the Haijing 5203, has been sailing in and around Luconia Shoals since April 1.

The apparent standoff near the West Capella occurs as Beijing faces diplomatic pushback from some of its Southeast Asian neighbors against its sweeping assertion of sovereignty across the resource-rich sea.

Over the weekend, China’s upped the ante when it announced two new administrative districts for the South China Sea and released a new map naming all the islands and reefs it claims in the contested region – though Brunei, Malaysia, the Philippines, Taiwan and Vietnam also have sovereignty claims that overlap with China.

In recent weeks the U.S. has withdrawn key assets from the Pacific. The aircraft carrier the USS Theodore Roosevelt had to be pulled out of active deployment on March 26 because of dangerous rates of coronavirus infections among its crew. The U.S. Air Force announced last Friday it would stop deploying strategic bombers to its base on the Pacific island of Guam.

But Cooper said the arrival of the USS America and Bunker Hill “serves as a reminder that the U.S. Navy is large and not dependent on one ship to show regional presence.”

He said the U.S. is using this deployment to remind China and other claimants in the South China Sea that China has no legal basis to economic rights in the area the Hai Yang Di Zhi 8 is operating in.