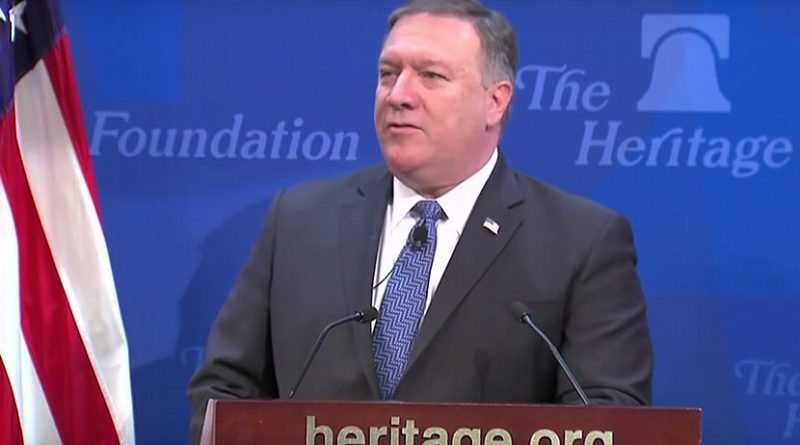 US Secretary Pompeo delivers a speech on a New Iran Strategy at The Heritage Foundation. Credit: US State Dept. video screenshot.

The US told Iran on Monday to drop its nuclear ambitions and pull out of the Syrian civil war in a list of demands that marked a new hard-line against Tehran and prompted an Iranian official to warn that Washington seeks regime change.

Weeks after US President Donald Trump pulled out of an international nuclear deal with Iran, his administration threatened to impose “the strongest sanctions in history,” setting Washington and Tehran on a deeper course of confrontation.

US Secretary of State Mike Pompeo demanded sweeping changes that would force Iran effectively to reverse years of its foreign policies.

“The sting of sanctions will only grow more painful if the regime does not change course from the unacceptable and unproductive path it has chosen for itself and the people of Iran,” Pompeo said in his first major speech since becoming secretary of state.

“These will be the strongest sanctions in history by the time we are done,” he added.

Pompeo took aim at Iran’s policy of expanding its influence in the Middle East through support for proxy armed groups in countries such as Syria, Lebanon and Yemen.

He warned that the US would “crush” Iranian operatives and allies abroad and told Tehran to pull out forces under its command from the Syrian civil war where they back President Bashar Assad.

Iran is unlikely to accede to the US demands. Tension between the two countries has grown notably since Trump this month withdrew from the 2015 nuclear agreement aimed at preventing Tehran from obtaining a nuclear weapon.

Pompeo warned that if Iran fully resumed its nuclear program Washington would be ready to respond and said the administration would hold companies doing prohibited business in Iran to account.

“Our demands on Iran are not unreasonable: Give up your program,” Pompeo said, “Should they choose to go back, should they begin to enrich, we are fully prepared to respond to that as well,” he said, declining to elaborate.

Pompeo said if Iran made major changes, the US was prepared to ease sanctions, re-establish full diplomatic and commercial relations and support the country’s re-integration into the international economic system.

The speech did not explicitly call for regime change but Pompeo repeatedly urged the Iranian people not to put up with their leaders, specifically naming President Hassan Rouhani and Foreign Minister Mohammad Javad Zarif.

“At the end of the day the Iranian people will get to make a choice about their leadership. If they make the decision quickly, that would be wonderful, if they choose not to do so we will stay hard at this until we achieve the outcomes I set forward,” said Pompeo.