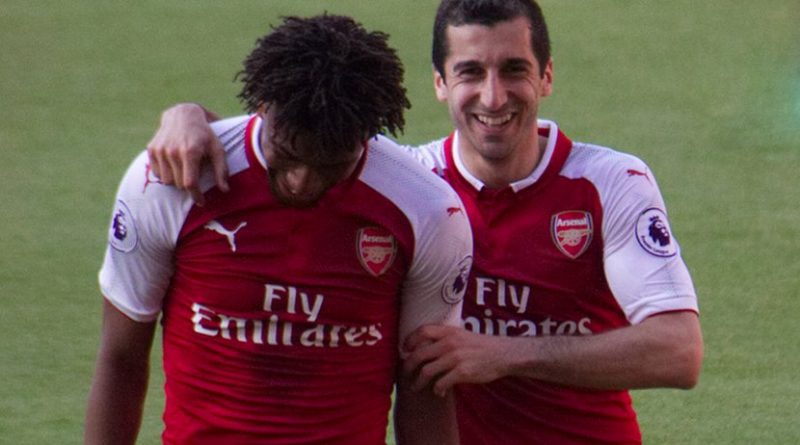 (RFE/RL) — Armenian soccer star Henrikh Mkhitaryan will not play in a major European match in Baku later this month, the English club Arsenal has announced, ending uncertainty about whether the midfielder would make the trip to his country’s bitter foe.

In a statement on May 21, Arsenal said it was “very disappointed” that Mkhitaryan would not travel to Azerbaijan to face London rival Chelsea on May 29 for the UEFA Europa League title.

Arsenal, which had sought assurances that Mkhitaryan could travel to Baku and play the match there safely, did not say what prompted the decision.

“We have thoroughly explored all the options for Micki to be part of the squad but after discussing this with Micki and his family we have collectively agreed he will not be in our travelling party,” the statement said.

Arsenal manager Unai Emery said that Mkhitaryan “spoke with his family and decided not to go.”

The Arsenal-Chelsea match will be the first European club competition final played in Azerbaijan, and Mkhitaryan’s absence is potentially a powerful public-relations blow for Baku. Azerbaijan is seeking to host the Euro 2020 championship.

Arsenal said that it has written to European soccer governing body UEFA “expressing our deep concerns about this situation,” but did not explain why Mkhitaryan would not travel to Azerbaijan for the match.

The English club had sought guarantees from UEFA that Mkhitaryan could safely make the trip. He did not travel with Arsenal for a group-stage game in Azerbaijan earlier this season.

“Having considered all the current options, we had to take the tough decision for me not to travel with the squad [to Azerbaijan],” Mkhitaryan wrote on Twitter later on May 21.

“It‘s the kind of game that doesn’t come along very often for us players and I must admit, it hurts me a lot to miss it,” the player tweeted. He also gave no specific reason for the decision.

UEFA said that it had done everything it could to ensure Mkhitaryan’s safety in Baku.

“Working alongside Arsenal FC, UEFA sought and received assurances regarding the player’s safety in Azerbaijan from the highest authorities in the country,” the soccer body told RFE/RL by e-mail.

“As a result of these guarantees, a comprehensive security plan was developed and given to the club,” it said, adding that it respected the decision reached by Arsenal and Mkhitaryan.

UEFA said on May 10 that it had received assurances from the Azerbaijan Football Association that Mkhitaryan could travel there “and that all necessary security measures would be in place.”

On the same day, Azerbaijani Foreign Ministry spokeswoman Leyla Abdullayeva said that Mkhitaryan could play in Baku despite longstanding tensions between Azerbaijan and Armenia, telling the AP news agency that “sports and politics are separate.”

“In spite of the difficult relations between Azerbaijan and Armenia, Mkhitaryan can play in the Europa League final in Baku,” Abdullayeva told AFP on May 21.

Azerbaijan’s ambassador to Britain has said that Mkhitaryan would be free from any threat of violence.

Arsenal had not said publicly whether the assurances were sufficient.

“Micki has been a key player in our run to the final so this is a big loss for us from a team perspective,” the club said in its May 21 statement.

“We’re also very sad that a player will miss out on a major European final in circumstances such as this, as it is something that comes along very rarely in a footballer’s career,” it said.

There are no diplomatic relations between Yerevan and Baku because of a long-standing conflict over Azerbaijan’s breakaway Nagorno-Karabakh region. Azerbaijan usually does not allow foreign nationals of Armenian descent to enter the country.

Armenian Foreign Ministry spokeswoman Anna Naghdalian on May 21 cited reports that Arsenal’s ethnic Armenian ticket holders have been barred from entering Azerbaijan. She condemned that as another “manifestation of racism” on the part of Baku.

Arsenal has held talks with the British Foreign Office in an effort to help British-Armenian season-ticket holders who have been denied an Azerbaijani visa, The Times reported on May 16. The report said the club was seeking to “ascertain whether any pressure can be put on the Azerbaijan government to make an exception for fans who are likely to miss the final.”

On May 21, the Arsenal Supporters’ Trust tweeted that UEFA “should be ashamed.”

“There are Arsenal season tickets holders denied visas or scared to travel because they are British Armenian and will be targeted. This is basic equality and human rights,” it said.

Tensions between Azerbaijan and Armenia have been high for decades amid a persistent conflict over Nagorno-Karabakh.

The region, which is populated mainly by ethnic Armenians, declared independence from Azerbaijan amid a 1988-94 war that killed some 30,000 people and displaced as many as 1 million. Deadly fighting breaks out intermittently.

Since 1994, when a cease-fire agreement was reached, it has been under the control of ethnic Armenian forces that Baku says include troops supplied by Armenia. No country has recognized it as an independent state.