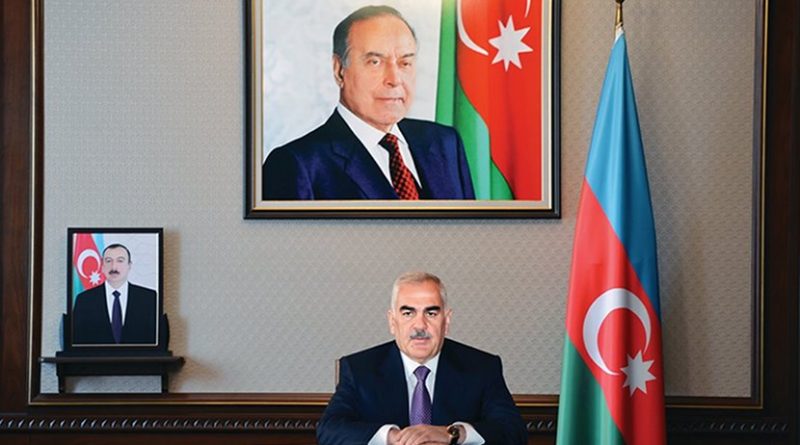 In the middle of a global public health pandemic, the government of Azerbaijan has prioritized public works, economic and sports activities in Nakhchivan. Equally, it has admirably managed the pending crisis in public health.

On April 23 (2020) the President of Azerbaijan Ilham Aliyev signed an Executive Order in support of additional measures to improve the supply of water for irrigation and consumption in the Nakhchivan Autonomous Republic.

Under the presidential order, the Cabinet of Ministers of Nakhchivan has been assigned the fund of 1 (one) million manat (national currency) to dig sub-artesian wells to improve the irrigation of arable land and the supply of drinking water in the Autonomous Republic. These projects are underway thanks to the management of the leader Vasif Talibov, President of the Supreme Assembly of Nakhchivan.

Within the strategic development framework of Nakhchivan, on November 22, 2019, the President of Azerbaijan Ilham Aliyev has signed an Executive Order on measures to renovate the Julfa-Ordubad highway in the Nakhchivan Autonomous Republic. According to the Presidential Order, the Cabinet of Ministers of the Nakhchivan Autonomous Republic has allocated 34.3 million manats for the renovation of the road; that is a vital investment for the development of the regional economy, tourism and the food industry. Also, in recent months, various sports activities have been organized in Nakhchivan – Azerbaijan.

On March 5, 2020, the Sports Festival began at the “Saat Meydani (Clock Tower Square)” Tourism and Recreation Center in the Nakhchivan Autonomous Republic.

The event brought together athletes, sports specialists, and famous officials from Azerbaijan.

Before the Festival, the representatives of the Ministries of Youth and Sports, and the sports federations of Azerbaijan and the Nakhchivan Autonomous Republic, as well as the best athletes placed flowers on the statue of the great leader Heydar Aliyev in the central square of the city of Nakhchivan and became acquainted with the urban center of this magnificent city. Participants entered the Heydar Aliyev Museum to learn about the work and public management of this great European leader. Held annually on March 5 on Baku Seaside Boulevard, the Sports Festival was first organized in the city of Nakhchivan. The President of the Supreme Assembly Mr. Vasif Talibov, has demonstrated an admirable efficiency in the spending of the general state budget and above all his administration demonstrates high levels of transparency, accountability and consistent work to improve the well-being of every Azerbaijani citizen who lives in Nakhchivan.

While the Coronavirus continues to affect the world, causing the death of thousands of people and infecting millions of citizens, the Republic of Azerbaijan has implemented a very dynamic roadmap to contain the spread of the virus and eliminate as much as possible the adverse effects of this pandemic within the general population. Since March 10 (2020), the administration of President Ilham Aliyev and regional leader Mr. Vasif Talibov have taken proactive measures in Nakhchivan to minimize the presence of COVID – 19 in this territory of Azerbaijan.

On April 6 (2020), “18 cases of Coronavirus infection (COVID-19) have been reported in the Autonomous Republic of Nakhchivan, with one of them recovered and released from the hospital,” stated the public health ministry of the Autonomous Republic. The ministry spokesman added: “In addition, the treatment of another 17 infected is underway in specialized hospitals. There are no complications observed among the patients”. In mid-April, there were 2,896 people being kept under medical observation in Nakhchivan. From these, 536 were people from other regions of the country who visited the Autonomous Republic.

In a recent interview with the Azernews Daily, the UNICEF Representative in Azerbaijan, Edward Carwardine, provided a very important information on the measures taken by the organization to protect children during the coronavirus pandemic: “A large part of our work really dates back to the start of the pandemic in March and has focused on increasing public awareness and knowledge about the virus. Particularly in spreading basic information on how families can stay safe, how they can prevent the risk of transmission, personal hygiene information, etc. We are also working with our local partners in the communities to obtain information directly from families to continue raising awareness and knowledge among the public about the virus and how to reduce the risk of it being transmitted.”

Mr. Carwardine also emphasized the good work that the Azerbaijani government has done to reduce the spread of COVID-19 and the precautionary measures that are directed towards personal hygiene, physical distancing and good nutrition.

In recent months, the Nakhchivan Government, under the leadership of Mr. Vasif Talibov, has achieved very important milestones in the field of public health management and education. The President of the Republic of Azerbaijan Mr. Ilham Aliyev and the leader of the Nakhchivan Supreme Assembly Mr. Vasif Talibov, have implemented strategic projects in road infrastructure and maintained agricultural production and a stable economic growth in times of global recession and pandemic. With more than 460 thousand inhabitants, Nakhchivan has several public works that provide tremendous support to society and contribute to the socioeconomic development of Azerbaijan and are examples of great success in the Caucasus region and Europe.

Above all, the operation of five hydro-electric plants and one solar panel plant are projects that inspire leadership and greatly improve Eurasia’s vision towards the production of renewable energy and strengthen Corporate Social Responsibility. Furthermore projects in Agro-forestry and agriculture technology are an important asset for the Government and citizens of Nakhchivan – Azerbaijan.  Nakhchivan – Azerbaijan is a highly developed region that serves as an illuminating success story where the principles of the Fifth Industrial Revolution are well positioned in current public policies implemented by its leader Vasif Talibov. This level of leadership incorporates good public money management and transparency, for this reason I am sure that great thinkers like Seth Godin (international marketing expert) and other economists, entrepreneurs have a lot to learn from public management in this territory of Azerbaijan.