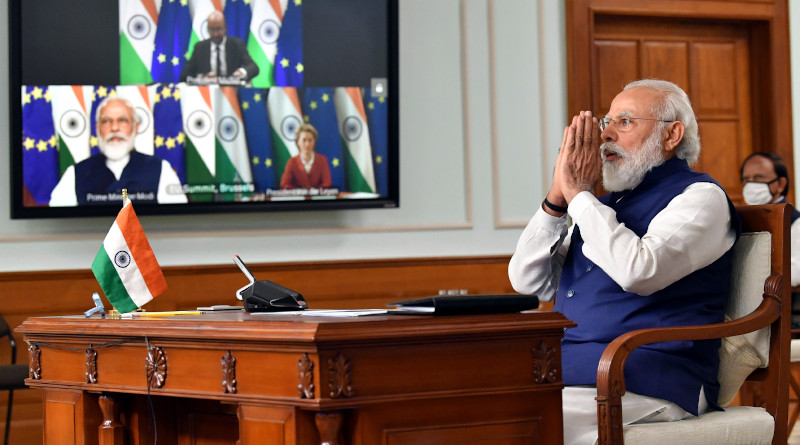 Only a week after EU’s top diplomat Josep Borrell lamented that “Europe feels somewhat lonely, trying to hold the multilateral ring. For sure we know that we need partners.”, the successful India-EU summit on 15 July seemed to deliver with an agreement on peaceful nuclear cooperation, a declaration on sustainability and a strong joint statement and a roadmap for closer bilateral and multilateral cooperation.

Arguably the summit outcome was a culmination of the shift from a predominantly trade focused relationship to a more strategic partnership first outlined in the EU’s 2018 new policy for India. India does make for a very promising partner: a potential democratic superpower in the Indo-Pacific with a positive disposition towards the EU and a shared perspective on many global issues.

The joint-statements on the 15th summit also took care to emphasize the ‘shared principles and values of democracy, freedom, rule of law, and respect for human rights’ that would underpin the closer relationship – aspects which have become increasingly problematic to the EU-China relationship during what was meant to be China’s ‘year of Europe’. However, in its eagerness for an ally, the EU should be mindful not to overlook the worrying signs that India’s democratic and human rights credentials appear to be corroding on the edges.

In 2014, when Narenda Modi led the BJP led coalition to an election victory, India was considered the 27th most democratic country in the world by the Economist Democracy Index after trending upwards on most indicators for years – ahead of 14 EU member states, including Italy and Belgium. By the end of 2019, India had fallen to the 51st place and been labeled a ‘flawed democracy’.

The fall was largely attributed to its sinking score in civil rights and basic freedoms – particularly the right to know, the right to express, challenge and question executive authority – that have come under persistent attack from Modi’s nationalist government. Strong electoral process and political participation remains strengths of Indian democracy, but erosion of political freedoms and discourse all too often precedes their decline.

Particular concern is rising over the rights of India’s 182 million Muslim population. In August 2019, the Modi Governement ended the autonomy of the Muslim majority state of Jammu and Kashmir and the region has remained under a clamp down ever since. On 8 July, the UN special rapporteurs made its communiques over the ‘grave concern over alleged excessive use of force, ill treatment during arrests and detentions’ public after receiving no responses from New Delhi for nearly a year. In December, the India’s Citizenship Law was accused of seeking to redefine India’s identity by excluding Muslims from the list of persecuted minorities welcome in India. Aside the few motions at the time from European Parliament, the EU response to the alarming developments in 2019 were muted – and did not feature in the recent summit.

With China, until recently human rights, the rule of law and democracy were relegated to the backseat in pursuit of closer cooperation and bilateral trade ties. This more pragmatic and ‘realist’ approach was taken despite China’s evident hardening of domestic controls and global promotion of China’s own unique take on the values and rights since the ascendancy of Xi Jinping in 2012. The EU was able to maintain this posture up to this year, until the situation in Hong Kong and Xianjing made it impossible.

Regardless of the worrying cracks that have appeared, India remains a democracy with a multitude of parties, active civil society, famously independent high courts and a vibrant opposition. Earlier in May, Borrell stated to a conference of German diplomats that besides (and for) a robust strategy on China, the EU must cultivate a stronger relationship with “the rest of democratic Asia”.

India fits the bill, but the EU must not look away if the bright light of Indian democracy begins to flicker. The focus on strategic interests can carry the relationship only so far – as the case of China has demonstrated. The EU must keep the dialogue over ‘values and principles’ it jointly professed with India in the forefront as the relationship deepens, even if it at times risks slower progress elsewhere. Left ignored, a sapling issue of compromised civil rights can grow to a thorny crisis that the EU cannot eventually ignore.