Apart from the overlapping lines drawn on the map, contours of confrontation are beginning to appear in the territorial disputes in the South China Sea (“SCS”). The dispute, careening towards a military flashpoint that potentially threatens to destabilise the region, revolves around considerations of energy security overlapped on China’s longer-term aspirations of playing a larger role in regional geopolitics. 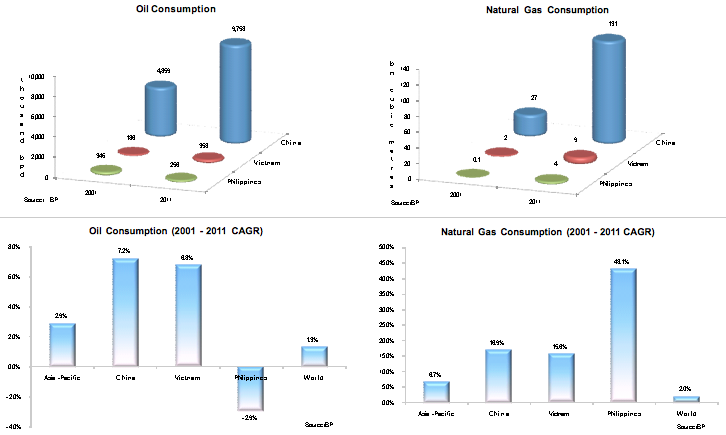 The economic stakes are high. As Asia guzzles ever-increasing amounts of oil and natural gas, securing steady sources of energy supplies will assume critical importance. Energy security would reduce dependence on sources from distant geographies, often muddled in strife of their own, and confer significant geopolitical leverage upon the endowed.

Believed to be lying below the waters are deposits of natural gas and oil. Reserve estimates vary widely from a low of 28 billion barrels to a high of 213 billion barrels; the latter, if true, would catapult the SCS to third in the global league tables of proved oil reserves, behind Saudi Arabia. There is a 50% chance that the waters hold 3.8 trillion cubic metres of natural gas, which is a shade under a quarter of Asia-Pacific’s present proved natural gas reserves. The SCS serves as an important transit pathway for natural gas and oil movements in the region. The value of the ship borne trade is estimated at US$5 trillion annually.

For China, the SCS is a matter of sovereignty. Overlapped on economic considerations, China’s keenness in exercising influence is comprehensible. The SCS could provide succour to the energy parched economic behemoth, which is a net importer of oil and natural gas, and afford it an opportunity to project its authority on the region. The hydrocarbon angle also holds interest to two other net importers of oil claiming overlapping interests in the region, Vietnam and the Philippines. Brunei and Malaysia, the other players in the fray, are net exporters of oil and natural gas.

This is China’s opportunity to project strategic leadership and raise its influence to a higher plane, within the region and more broadly, among the world. A slovenly attitude bordering on belligerence at this critical juncture would severely undermine credibility, not only among regional peers but also global geopolitical rivals. In order to emerge as a responsible participant in the global sphere, it is imperative for China to choose dialogue over arsenal.

Prospects of a collective resolution to the problem, possibly moderated by the ASEAN, appear dim, given the historical deadlock among regional stakeholders. The failure of the July 2012 ASEAN Foreign Ministers’ Meeting in putting out a Joint Communiqué, for the first time in forty-five years, should have come as no surprise, as the realistic probability of eking out a consensus on the South China Sea issue was slim. The only statement released, the Six-Point Principles on the South China Sea, made two explicit references to the United Nation Convention on the Law of the Sea (UNCLOS). A point that China contends does not apply to the present situation, which it claims revolves around historical sovereignty.

China’s preference for bilateral talks over multilateral consensus building is understandable, as it proffers greater negotiating leverage over individual smaller nations, thanks to its superior economic positioning. Whether bilateral talks would be aimed at achieving multilateral accord, remains draped in speculation. China is likely to continue to use bilateral diplomacy to win support among smaller non-claimant nations, combined with covert displays of understated aggression, to guide its policy posture in the situation.

China’s sense of timing in escalating the issue, amid the backdrop of upcoming elections in the USA, bears traces of opportunism. It would, however, have to balance this with the high-level leadership transition at home, which carries with it its own interest-group idiosyncrasies. It is in China’s interest to keep USA from intervening in the situation. A belligerent posture towards the ASEAN bloc is likely to exacerbate the situation, by driving smaller nations into USA’s arms. Consequently, China will deem it appropriate to adopt, or at least convey, a temperate stance. There is much at stake, should skirmishes lead to all-out confrontation; which, while low probability, could potentially be a high-impact event with severe repercussions for China and the region. It is difficult to see China pushing this to the region’s pain point. The military and strategic costs would be too high.

The USA’s National Security Strategy explicitly recognised China’s emergence as a geopolitical influence to be reckoned with, in addition to its emergence as an economic power. USA’s “pivot” to Asia signals its concerns in managing China’s rapid emergence in the global power rivalry. Washington faces pressing multiple escalation/de-escalation questions heading into election period. The FDR era isolationism/interventionism debate may re-emerge on the ‘East Questions’ – Israel-Iran, Syria in the Middle East and the South China Sea in the Far East. It seems likely that the USA may feel obliged to intervene on the premise of protecting its interests, ostensibly commercial but also geopolitical, in the region.

Having played a pivotal role on the international sphere for nearly a century, the USA would be wary of instigating actions that cede control to rivals, particularly China. USA intervention could potentially imperil the bilateral relationship between the USA and China, where a degree of nervousness lurks below a layer of harmony, threatening to lead to a cataclysmic rift. Areas of disagreement abound on both sides, with China being suspicious of USA’s attempts at stymieing its military and economic ascendancy. Beijing’s recent rejoinder in response to Washington’s statement on the issue, where the latter took umbrage to the establishment of a military garrison in the city of Sansha, is indicative of China’s rather dismissive posture towards covert USA participation.

Consequently, continued military brinkmanship by China would play into USA’s hands. This would give the latter an excuse to project itself on the situation, on the side of the smaller nations in the ASEAN bloc. As long as China projects a conciliatory stance towards its neighbours, the USA would be hard pressed to clothe its participation in diplomatically palatable terms, whether internationally or at home. Domestic electoral politics notwithstanding, the USA would do well to assume the role of a vigilant observer in the conflict, and let regional stakeholders eke out a peaceful solution.

Vietnam and the Philippines have few alternatives. In its strong condemnation over the non-issuance of the Joint Communiqué, Philippines referred to China as the ‘northern neighbour’ and plainly spelt out the need for multilateral resolution over bilateral discussions, a route which China prefers strongly. The troika’s tit-for-tat actions, which witnessed them extending invitations to oil companies in June/July 2012 to explore in contested overlapping waters in the SCS, further added fuel to simmering differences. The smaller nations are justifiably worried about shifting balance of powers in the region. Their attempt at internationalising the problem is at loggerheads with China’s efforts at regionalising the issue. This impasse could swiftly escalate in the absence of proactive dialogue.

Vietnam and the Philippines’ trade dependence on China confer upon these nations weaker negotiating leverage relative to China, on the economic sphere. Moreover, they lack the individual military might to take China head-on in an armed confrontation. They have little to gain and much to lose by adopting this course of action. Given the power differential, the optimal path ahead for the smaller neighbours would be to pursue a course of constructive multilateral dialogue. In several ways, the smaller nations have a hedge in the USA, should China opt to escalate confrontational rhetoric. Given the potential of this development, China ought to reconsider overplaying its hand.

Leadership At A Critical Juncture: China Should Devote Energy Into Regional Security

Troubles, meanwhile, are brewing between China and Japan over the Senkaku Islands (Diaoyu Islands) in the East China Sea. The intensity of statements, from China, risks another territorial dispute between the two historically edgy neighbours spiralling out of control. Chinese activists made their way to the Islands and the Chinese media promptly seized the situation to fan nationalist sentiments. When Japan activists reciprocated, anti-Japan protests erupted in China. Territorial questions tend to easily stoke nationalistic feelings among citizens, which becomes a cagey issue for governments to handle beyond a tipping point.

On one hand China claims this is a question of sovereignty, and thus outside the purview of UNCLOS; on the other hand it demonstrates an earnestness to assert its territorial claims in the region, so it has a hedge under the aegis of the UNCLOS. China should resist the urge to escalate military maritime forcefulness and devote energy into regional security. Its assertiveness would be welcome, if directed at achieving a multilateral solution to the issue and within the purview of the basic tenets of international law.

Some form of equitable distribution and joint development of hydrocarbon resources appears the best mode of action available to regional participants, who must mutually work towards peaceable resolution of festering discord. This, in turn, is somewhat predicated on resolution of the claimants’ territorial disputes, a prospect that appears mired in deadlock. There are no easy solutions. Dithering increases the risk of armed conflict, accidental or otherwise. International arbitration, presided over by the USA, would dent China’s image as an emerging responsible leader on the global scale.

At a broader level, the issue could signal a subtle, albeit gradual, shift of influence; from the West to the East. The South China Sea could potentially be a key moment of transition in the relations between USA and China. Battle lines might be drawn but the probability of a full-scale armed conflict appears slim, so far, at least. This is one opportunity of leadership that China should be loath to squander away.

Hemant Sreeraman is an investor with a special interest in the interplay of finance and geopolitics, a London School of Economics & Political Science alumnus, with areas of concentrations in Economic History and International Relations. ([email protected]).