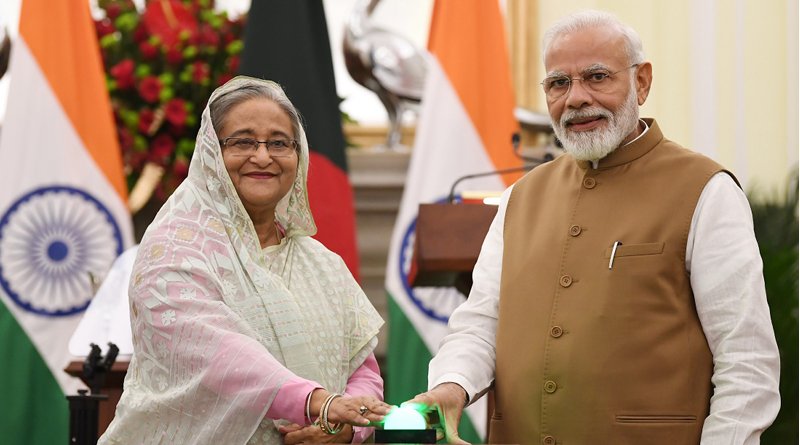 On August 18, 2020 foreign secretary of India Harsh V. Shringla was sent to Bangladesh where he met Prime Minister Sheikh Hasina the next day. The visit was in context with the shrinking bilateral ties with Bangladesh in the recent years. The strained relations has probably provided China an opportunity to get nearer to Bangladesh. The trip was sudden as owing to Pandemic most countries are trying to conduct their relations online. This was in the backdrop on an announcement that China is going to provide $1 billion to Bangladesh for Teesta river project. Local media reported that the country is accepting China’s proposal as India has failed to resolve the protracted issue. Hence, China is being roped-in for river management projects in Bangladesh.

Shringla was India’s High Commissioner to Bangladesh, hence he knows the country and leaders well with manageable equations with the Awami League leaders. Therefore, he has been assigned the job of putting his diplomatic skills to recalibrate ties with Bangladesh.

Bilateral relations with Bangladesh hit a nadir when students of that country had threatened of a massive protest when Prime Minister Narendra Modi was scheduled to visit Bangladesh to take part in the birth centenary celebrations of Mujibur Rahman, the founder of Bangladesh. Though the visit got cancelled owing to the Pandemic. However, the incident speaks volume about India’s strained relations with erstwhile friendliest neighbour.

Why Bilateral Relations is on the wane?

There could be several reasons for the downturn in the relations:

China has been looming large over almost whole of South Asia. Pakistan has been an all-weather friend of China. Nepal slipped to China with Oli’s victory. Sri Lanka with coming back of Mahinda Rajapaksa. Maldives too with their aspirations for economic development is converging with China. Now Bangladesh too is embracing China gradually. Thus, China has been successful towards weaning away India’s friendly neighbours one-by-one.

China and Bangladesh established strategic ties in 2016 on the occasion of Chinese President XI’s visit to Bangladesh when he also announced an investment to the tune of $25 billion. Since then both these countries have entered into several MoUs and the projects have been undertaken by China in Bangladesh. China is by now implementing infrastructure projects worth $ 10 billion. These projects include Chinese Economic and Industrial Zone, the coal-fired Pyara Power Plant, the 8th China Bangladesh Friendship Bridge, and the International Exhibition Centre. Bangladesh is also one of the key countries within South Asia for China’s flagship project BRI (Belt and Road Initiative).

Testa is one of the 54 rivers flowing from upstream India to Bangladesh. Teesta river water sharing has remained one of the most controversial issue between India and Bangladesh. Teesta river originates from Sikkim and passes through West Bengal before finally merging with Brahmaputra river in Assam and Jamuna in Bangladesh. Bangladesh has been demanding 50 percent of the river’s water during the December-March period. No agreement on sharing of Teesta Water could have been materialised so far. It has been held hostage on account of domestic politics:

Hence, achievement with Bangladesh on all other matters gets nullified on account of stalled progress on Teesta water sharing.

Sheikh Hasina, the present Prime Minister has been and Indian friend in real sense of the term before China started economic diplomacy with Bangladesh in an aggressive manner, especially in the aftermath of its flagship BRI. India-Bangladesh bilateral relations has been passing through a golden phase during Hasina’s regime. Bangladesh, Bhutan, Nepal and Myanmar have been safe heaven for India’s northeast insurgents. Most of them had their camps operating from the lands of these neighbours. During Sheikh Hasina’s regime violence and terrorists were almost contained in Assam. When she came to power in 2009, her government handed over the leaders of the ULFA (United Liberation Front of Assam), operating from Bangladesh. Her government made it clear that anti-Indian forces are not welcome.

However, with China’s deeper penetration in Bangladesh, India slowly started losing the warmth in bilateral relations. Though the opportunity to China has been provided by Sheikh Hasina’s party’s domestic agenda. Thus, the relations have been straining even on account of Bangladesh’s own internal political compulsions, as it must not seem to its own people over-friendly to India. It must not be branded as Indian stooge.

India too has its own internal political compulsions as indicated above. On the domestic front Assembly elections are pending next year in West Bengal. Bengali-speaking Muslims and illegal Bangladeshi migrants will storm the elections in a big way in the state.

The biggest strategic threat and concern for India may be, if the reports are true that China is paving the way for Pakistan to enter into Bangladesh. Thus, Pakistan-China-Bangladesh axis within South Asia will be huge strategic threat to India. Nepal and Sri Lanka too will double the trouble in the neighbourhood.

India has shut its border with Bangladesh owing to Corona spread and international flights are also stopped across the boundary. Bangladesh had opened its own side of the border. Accordingly, India too responded with plans to start air transport bubbles. These are temporary arrangements to restart commercial passenger services. This was done to facilitate people coming to India to avail medical facilities, on the request of Bangladesh’s government.

Earlier in July Indian government had gifted 10 diesel locomotives to Bangladesh which was promised by Narendra Modi to Sheikh Hasina when she visited India in October 2019. She demanded the engines as it was urgently needed on account of 72 percent of Bangladesh’s rail engines were in worn-out conditions. Reportedly, India provided second-hand locomotives on requests of Hasina, still India was criticised in Bangladesh for not providing new ones. There are some other old projects too which India is working on in Bangladesh.

Shringla has been thus put to diplomatic job of making India’s relations with Bangladesh smooth and prevailing upon Bangladesh to keep China at a distance. How far he is successful only time will reveal. Shringla may be able to control the thaw in the relations to an extent but relationship requires to be nurtured on a long-term basis. India must not lose on at-least with those countries where it has government which is friendly to India. It must not take for granted its relations. India need to realize the Chinese growing pressures in the neighbourhood. It must work hard now to recalibrate its ties to make really meaningful its ‘Neighbourhood First’ foreign policy.

China indeed has made deeper inroads right under India’s nose. It is prevailing gradually in India’s backyards. With Shringla’s visit, India’s initiatives are of course in the right direction, given the growing engagement with China. However, India need to pull-up its socks and learn that domestic politics must not rupture foreign relations. Recent spate of political development and emotive statements have certainly disappointed the Awami League supporters who were friendly towards India thus far. Therefore, India while devising its domestic policy interventions must keep in mind its implications on neighbours.

For Bangladesh it would be really challenging to push back China or keep China at a distance and keep reaping benefits out of it, without disturbing its equations with India.