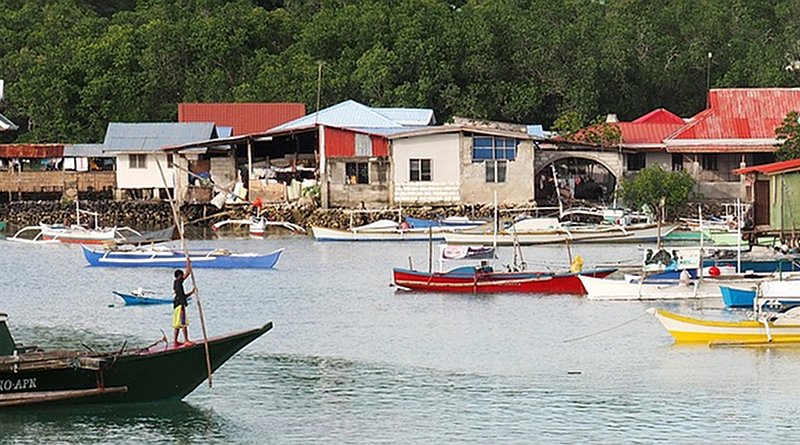 Fishing village in the Philippines

Manila lodged a diplomatic protest against Beijing over its coast guard’s confiscation of Philippine fishing gear from a disputed South China Sea shoal, the foreign office said, in its third bilateral complaint this year about Chinese actions in the waterway.

The Philippine Department of Foreign Affairs said it objected to “radio challenges” sent by Chinese air controllers to Philippine planes patrolling the region as well as to the seizure of the equipment from Scarborough Shoal, a Chinese-occupied reef claimed by both countries. The shoal sits in the middle of a prime fishing ground and is within the Philippines exclusive economic zone (EEZ).

The department, in a brief statement issued late Thursday, said it had “lodged today a diplomatic protest to China over the illegal confiscation by the Chinese Coast Guard of fish aggregating devices (payaos) of Filipino fishermen in Bajo de Masinloc in May.”

Payaos is a Tagalog name for man-made floating reefs where fish flock and Filipino fishermen use them to haul in catches. Such gear was left on the reef after China seized Scarborough Shoal in 2012 during a territorial standoff with the Philippines.

On Friday, officials at the foreign office gave no other details about the complaint but said the department would have to consult with a multi-agency task force on the West Philippine Sea headed by the Philippines’ national security adviser.

Meanwhile in Beijing, a spokesman for China’s Ministry of Foreign Affairs defended the actions.

“The Chinese coast guard carried out law enforcement activities in the Scarborough Shoal waters in accordance with the law, and their actions are understandable,” spokesman Zhao Lijian said in a statement on Friday.

It alleged that the Philippine side had sent military aircraft to invade airspace adjacent to the Spratly Islands, “where China is stationed, damaging China’s sovereignty and security.”

Scarborough Shoal, or Bajo de Masinloc as Manila calls it, is a triangle-shaped reef that lies west of the main Philippine island of Luzon.

The Spratlys, a group of atolls and islets believed to be rich in mineral deposits, lie southwest of the Philippines. The chain is claimed by the Philippines, China, Taiwan, Vietnam, Malaysia and Brunei.

China claims most of the South China Sea, saying it has “historic rights” to the waterway, where it has been building military installations and artificial islands as Beijing expands the footprint of its armed forces in the contested maritime region. China’s claims are demarcated by a so-called nine-dash line that appears on Chinese maps.

Beijing effectively seized control of Scarborough Shoal eight years ago during the presidency of Benigno Aquino III, who was forced to take the case to an international tribunal.

In July 2016, soon before President Rodrigo Duterte assumed power, the court ruled in favor of Manila and against Beijing’s claim to the shoal. Neither the nine-dash line nor the “historic rights” argument was supported under the U.N. Convention on the Law of the Sea (UNCLOS), according to the landmark ruling that assessed whether they were accorded with international law.

Duterte, for his part, never actively pushed to enforce the ruling and so far has placated China by visiting Beijing five times during his presidency, in exchange for billions of dollars in Chinese aid and investment.

The earlier protests also included a Philippine complaint about an incident where a Chinese navy boat pointed a radar gun at a Philippine Navy ship near the Philippine-occupied Rizal Reef in the Kalayaan Island group.

On Friday, presidential spokesman Harry Roque suggested that diplomatic protests filed by the Philippines against China this year would not affect the relationship between the two Asian countries.

“Those protests are something that our diplomats normally file whenever they think our sovereign rights are violated,” Roque told reporters in Manila.

“But this won’t affect the entirety of our intimate relationship with China,” he said.