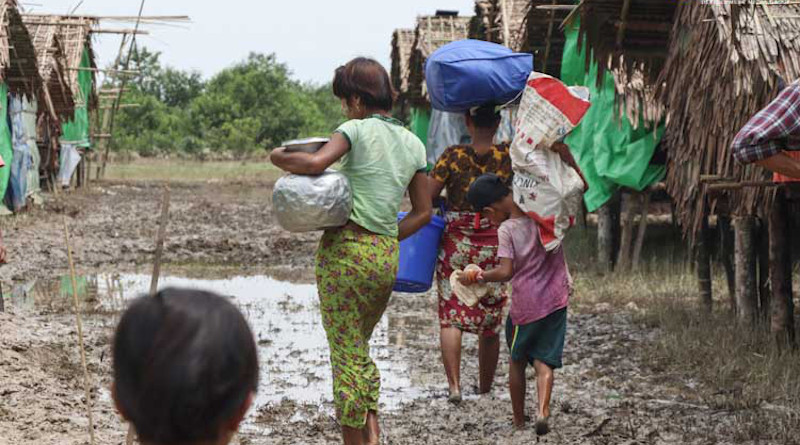 More than 3,200 internally displaced people (IDPs) sheltering at Tin Nyo camp in Arakan State’s Mrauk-U Township are in urgent need of rice, according to officials at the displacement camp and IDPs.

Supplies are about to run out at Tin Nyo camp as rice deliveries provided by the government had yet to arrive at the camp as of August 19, said camp in-charge U Wai Hla Aung.

Food supplies will be sufficient to meet the needs of IDPs sheltering at Tin Nyo camp only if rice is provided by the International Committee of the Red Cross (ICRC) and the government on a monthly basis, he added, because many people have taken refuge at the camp.

U Kyaw Mya Chay, an IDP at the camp, said the impacts of food shortages could extend beyond hunger, leading to negative effects on IDPs’ mental health and broader societal problems like crime.

“We are facing scarcity of jobs and will die of hunger if the government doesn’t supply food to us. As you know, people are not hesitant to commit crimes if they are hungry,” he said.

Distribution of rice to the camp has been delayed for August because the donors have needed to seek permission from the government, said an official from the Arakan State Department of Disaster Management.

“I think the permission letter would be approved today,” he said on Wednesday. “We would provide rice to Tin Nyo camp on August 20 or 21.”

In addition to the rice shortage, IDPs at the camp are in urgent need of blankets, mosquito nets and healthcare services in the rainy season, the camp official said.

The number of IDPs in Arakan State has climbed to about 200,000 due to ongoing clashes between the military and the Arakan Army over the past two years, according to the Rakhine Ethnics Congress (REC).