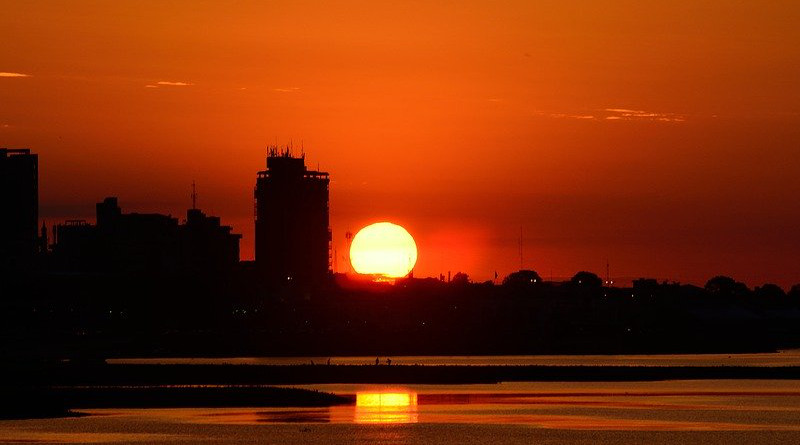 In 1957, the Republic of China (Taiwan) established diplomatic relations with the Republic of Paraguay, creating a continuous strategic partnership, for more than sixty-two years, that has created positive results and outcomes for the South American nation in the fields of: civil engineering, information technology, computer science, engineering education, electromechanical engineering, food industry development, cutting edge practices in engineering education curriculum assessment and strengthening of agriculture technology.

In addition, for more than half a century, the Republic of Paraguay has harnessed and shaped a strategic alliance with the Republic of China (Taiwan) that overcomes geographic barriers, it consists on a strong bilateral cooperation in the spheres of commerce, economy, political dialogue, cultural and university education. The areas of engineering education research and promotion of innovative ideas and sustainable development are some of the salient items in the bilateral agenda.

On June 26, 2017, on the occasion of commemorating the 60th anniversary of diplomatic relations between the Republic of Paraguay and the Republic of China (Taiwan); Paraguay’s Minister of Foreign Affairs Eladio Loizaga Caballero (2013-2018) noted:  “This anniversary has a special significance, because both countries maintain a singular bondage and close cooperation on many levels including economic, trade and promotion of engineering education programs in Asuncion.”

In December 2017, the annual bilateral trade had reached impressive results: exports of Paraguayan meat (coming from grass fed beef cattle) secured an important market share in South East Asia, thanks to the generosity of the Republic of China (Taiwan), in accommodating overseas, and serving as an intermediary, over 10,400 tons of meat (Paraguay’s signature product), a significant increase from 3,500 tons accomplished -imported in the previous year.

The Republic of China (Taiwan) – Paraguay partnership has shaped a new generation of engineers and set forth an ambitious technological – innovation agenda that brings the levels of engineering education, curriculum development (know-how) and research advancements in computer engineering at a higher degree in Asuncion.

In this context there are approximately seventy bilateral agreements, signed between the two governments that contribute in the economic growth of both nations.  An important aspect is also Taiwan’s successful experience in the management of human and natural resources; these are two essential concepts for Paraguay, knowing that it is – according to many indicators – ranked as the poorest country in South America.

The Development of Engineering Education Program in Asuncion acquired a new impetus with the indispensable support of the Government of Republic of China (Taiwan) and Ambassador Dr. Diego L. Chou has lately fostered the university to university partnerships and university – corporate internships; currently there are over 150 undergraduate and graduate Paraguayan students that are studying civil engineering, computer science and environmental engineering in the universities of Taipei.  Furthermore, the Ministry of Education and Sciences, Ministry of Agriculture and Livestock [1] as well as the Ministry of Industry and Commerce have implemented a series of projects funded by the Government of Taiwan in:

On January 10, 2017, the Technological Support Mission of Taiwan made a donation of 1,500 young anchovies (fish) of Tilapia to the Agriculture School of Caazapá.  The Taiwanese engineers held a series of training workshops with the local students and farmers so that pisciculture can become a new source of revenue for rural communities of Caazapá Department, one of the poorest regions of Paraguay.  The topic of these sessions was: “Integrated and sustainable education in agricultural engineering.” [3]

On November 24, 2017, the Paraguayan Minister of Agriculture and Livestock Dr. Marcos Medina signed a Memorandum of Understanding with the Ambassador of Republic of China (Taiwan) H. E. Alexander Tah-Ray Yui. This bilateral agreement consisted on the donation of two hundred thousand juvenile fish that will be farmed in the National Center of Pisciculture Production in the city of Eusebio Ayala [4] and a large project for the production of animal balanced food in the city of San Lorenzo. The ambitious project of animal food factory had a term of four years and encompassed a total investment of USD 3.5 million, a donation by the Government of Republic of China (Taiwan). [5]

On December 12, 2006, the Embassy of Republic of China (Taiwan) made a donation of 32 computers to the main Library of National University of Asuncion (UNA), and was inaugurated the office of information about Taiwan, in Paraguay’s largest and oldest public university. Taiwan’s Ambassador David Hu, was also present in the ceremony. The donation of 32 computers was part of a memorandum signed between the National University of Asuncion (UNA) and the University of Taipei. [6] Since September 1973, the Government of Republic of China (Taiwan) has offered economic and training assistance to the establishment of floriculture and production of roses and other varieties.  As of 2003 there were more than 42 species cultivated by the Paraguayan farmers thanks to the technical assistance and financial support of Taiwanese Government. [7]

On July 11, 2017, during his meeting in Taipei with Paraguay’s MFA Eladio Loizaga, Minister of Foreign Affairs of Taiwan David Tawei Lee noted: “The bilateral agreements signed will further strengthen the economic, trade and education partnership with Paraguay.”  Lee expressed his gratitude for the political support that Paraguay has provided to Taiwan in a number of multilateral organizations. [8]

On April 26, 2018, was signed the Presidential Request for the creation of Polytechnic University of Taiwan – Paraguay and forwarded to the National Congress of Paraguay for approval. [9] Under the framework of commemorating the 60th anniversary of diplomatic relations between Taiwan and Paraguay, and within the bilateral meeting of President Horacio Cartes Jara with President H. E. Tsai Ing-wen, was founded the Polytechnic University of Taiwan – Paraguay.  This strategic vision was materialized with the signing of a Memorandum of Understanding – signed on December 5th, 2017- between the Ambassador of Republic of China (Taiwan) in Paraguay H. E. Mr. Alexander Yui, and the Paraguayan Minister of Industry and Commerce Mr. Gustavo Leite.

Furthermore, the national law number 6.096/18 that establishes the Polytechnic University of Taiwan – Paraguay (PUTP) was promulgated on May 31st, 2018; it is worth mentioning that this university is working closely with the National Taiwan University of Science and Technology. Over the last two years the university has enrolled over 220 undergraduate students.

For the academic year 2020, Polytechnic University of Taiwan – Paraguay (PUTP) has enrolled a total of 106 students in the following Academic Departments: Electromechanical Engineering (27 students); Industrial Engineering (26 students); Civil Engineering (26 students); Information Engineering (27 students). PUTP has three new laboratories for: physics, chemistry and information sciences. With this education infrastructure, this university stands apart from other universities in Paraguay, knowing that technological and curriculum development is strengthening the critical thinking of students and increases awareness of social responsibility among faculty, students and community at large. [10]

On March 13, 2020, there was signed an agreement between the Paraguayan Ministry of Foreign Affairs and the Embassy of Republic of China (Taiwan) for the reconstruction of Municipal Theater of Villarrica.  This project has been financed by the Government of Taiwan with the total amount of USD 1.2 million.

The Villarrica Civil Engineering project is part of the Memorandum of Understanding covering the bilateral cooperation that was approved by National Law number 6275/2018; for the implementation period of 2018-2023. Ambassador Diego L. Chou, Ph.D., attended this event together with the mayor of Villarrica Gustavo Navarro.

On this occasion, the Ambassador of Taiwan Diego L. Chou noted: “this new project of cooperation will safeguard the cultural heritage of Paraguay, and improve the arts, making Villarrica a more attractive Paraguayan city. The municipal Theater of Villarrica is an important source of cultural development in Guairá.” [11]

In Paraguay, knowledge acquired from Taiwanese engineers especially in the fields of engineering education, agriculture and food engineering is of tremendous importance as Asuncion is struggling to have a greater number of engineers, women engineering professors, establishing engineering labs that satisfy the requirements of the Fourth Industrial Revolution (4IR).  Now Paraguay needs over six thousand engineers, and this is a monumental task knowing that Asuncion lags behind when it comes to the combination of biological, digital, chemical and physical worlds.

The current Government of Paraguay and its National Council of Science and Technology (CONACYT) must prioritize engineering education programs across all state funded and private universities. [13] Asuncion must establish a trilateral commission with Taiwan and the Institute of Electrical and Electronics Engineers (IEEE), so that Paraguay can secure a brighter future and greater levels of industrial production.

With the strategic assistance of IEEE and other partners, the Government of Paraguay will have a higher ranking in the annual Global Competitiveness Report, conducted by the World Economic Forum.

With an impressive demographic composure, Paraguay needs a growing exploitation of new technologies such as cloud computing, 3D printing, internet of things (affordable internet connectivity) and should make headway in the wireless technologies and cyber security engineering.

Asuncion, with the abundant financial and knowledge (know-how) support from the Republic of China (Taiwan) and other countries, can establish Artificial Intelligence Labs and training programs in the Public Universities of: Asuncion, Ciudad del Este, Caaguazú, National University of Concepción and in the National University of Pilar, Ñeembucú. A greater cooperation agenda with the Global Engineering Deans Council (GEDC) would benefit the Government of Paraguay and CONACYT.  Engineering Education is vital to a nation’s economic development and Paraguay is not the exception; technological innovation is deeply connected to the national economic performance and improves effectiveness in public policy.

The Republic of China (Taiwan), as a trustworthy ally of Paraguay, has made impressive progress in Engineering Education and Artificial Intelligence – to mention a few – now is the time for Asuncion to focus on the development of digital infrastructure that will greatly help scientific innovation and prevent financial collapse also economic stagnation.

Home » Taiwan And Paraguay: Partnership In Education And Research – Analysis