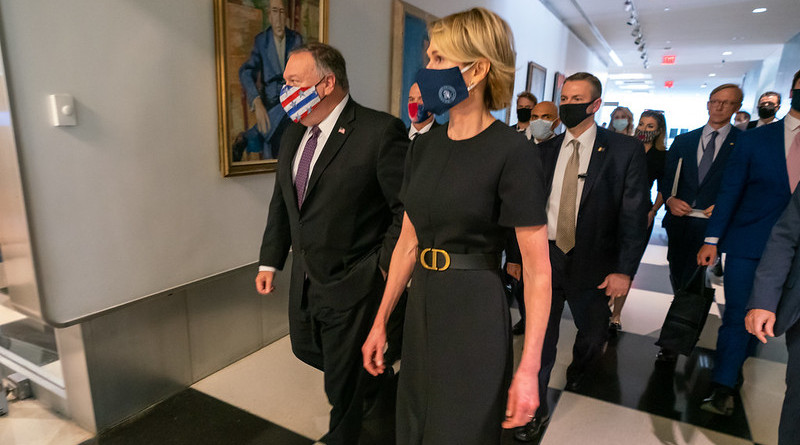 US Secretary of State Mike Pompeo on Friday issued orders prohibiting 14 Iranian officials and their families from entering the country. The officials are accused of being involved in human-rights violations.

The ban applies to 13 unnamed persons implicated in a 1990 assassination attempt in Switzerland, he said, plus the director of Iran’s notorious Evin Prison, Hojatollah Khodaei Souri. Souri has overseen the torture and other cruel, inhumane or degrading treatment of political prisoners, he added.

Pompeo would not specify whether the individuals were already in the country or had tried to enter, or whether they had participated in any recent incidents, but he said the action was linked to the commemoration on August 21 of the annual Day of Remembrance of and Tribute to the Victims of Terrorism.

“The US Department of State is announcing visa restrictions on 14 Iranian individuals for their involvement in gross violations of human rights on behalf of the Iranian regime, the world’s leading state sponsor of terror,” he said.

Pompeo declined to provide details of the “credible information” he said the State Department has about the 14 individuals but insisted they were engaged in “gross violations of human rights.”

“These actions send a message of support to the Islamic Republic of Iran’s many victims worldwide that we will promote accountability for those who spread terror and violence,” he said.

“The United States will continue to pressure Iran to treat its own people with dignity and respect. Iran conducts assassinations and terrorism abroad to spread its reign of terror well beyond its own borders.”

Pompeo said the 13 Iranians “posed as Iranian diplomats” and had acted “under the highest orders of their government to silence opposition” and intimidate expatriates who have criticized the regime in Tehran.

Pompeo said the ban on Souri is related to his role in supervising a system of human-rights violations in Evin Prison, where government critics are locked up, tortured and even killed.

“Evin Prison has been used to oppress peaceful Iranian protesters and journalists, as well as foreigners who are swept up and imprisoned to be held hostage to squeeze concessions out of their home governments,” he said.

The US action will also limit the ability of the 14 Iranians to travel to countries that have immigration and visa agreements with the US.

The announcement of the travel restrictions follows President Donald Trump’s announcement he is seeking the restoration of all UN sanctions on Iran that were lifted as a result of the 2015 Joint Comprehensive Plan of Action, also known as the Iran nuclear deal. The demand was submitted by Pompeo on Thursday in letters delivered to UN Secretary-General Antonio Guterres and the president of the Security Council. If successful, sanctions could be restored within 30 days.

After council members failed last week to approve a US resolution to indefinitely extend an arms embargo on Iran, which is due to expire in October, Trump is attempting to trigger a “snapback” under the terms of the 2015 Iran nuclear deal, from which the Trump administration withdrew in 2018.

This is a mechanism within the UN Security Council resolution that endorsed the deal, a resolution Pompeo describes as “one-sided” in favor of Iran, that allows any of the powers that signed the deal to submit a complaint to the Security Council if Iran fails to meet its obligations. If the concerns are not resolved, the UN sanctions that were in place before the agreement would be automatically restored, including an arms embargo.

While the Trump administration insists that it retains the right to initiate a snapback, even after withdrawing from the agreement, most other council members say it does not because it is no longer a party to the deal.