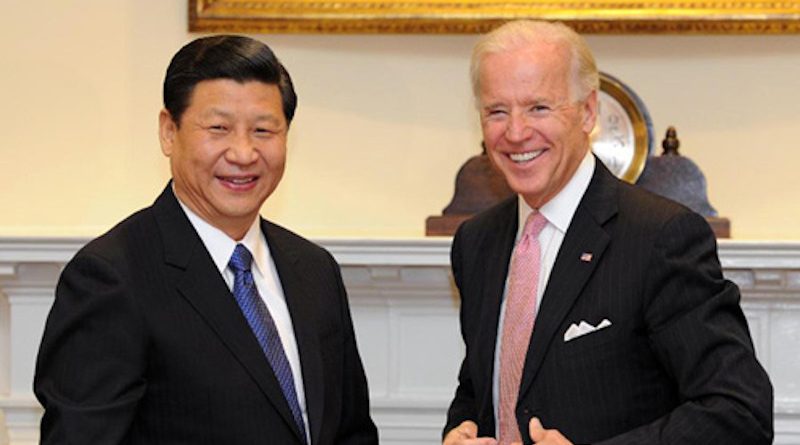 With desperate Afghans clinging to departing American airplanes, the fall of Afghanistan is being compared to the American evacuation of Saigon in 1975. The Taliban takeover may also preview how President Joe Biden would handle a military confrontation with China, perhaps over Taiwan.

As vice president, Biden got control of China policy through the work of longtime Democrat activist Thomas Donilon. Despite a questionable record as a lobbyist with Fannie Mae, then President Obama picked Donilon for national security adviser, which even troubled leftist writers such as Robert Scheer of Truthdig.

In “Duty: Memoirs of a Secretary at War,” Robert Gates wrote that Donilon characterized the U.S. military as “in revolt” and “insubordinate.” Donilon “bridled” when Gen. Stanley McChrystal announced a “counterinsurgency” strategy in Afghanistan. It disturbed Donilon that U.S. troops might actually defeat their enemies.

But Donilon was soft on China. The Biden loyalist disagreed that “a rising power and an established power are somehow destined for conflict.” As Donilon saw it, “a deeper U.S.-China military-to-military dialogue is central to addressing many of the sources of insecurity and potential competition between us.”

Biden revealed similar views with his 2020 comment that the Chinese were “not bad folks” and “not competition for us.” As Thomas Wright noted in The Atlantic on June 9, Biden now “worries that they are competition for America, and not only that—they might win. This belief underpins the Biden doctrine.”

For Biden, according to Wright, China’s strengths are overstated, and the United States can afford to be patient and restrained. Washington must stand up for its interests but must support peaceful coexistence with China. For Biden, this is not a new trend.

Biden voted against strong sanctions on communist China as a response to the Tiananmen Square massacre. In 1998, the United States again proposed sanctions on China, including visa restrictions, and Biden was part of a group of 10 senators who opposed the measures.

In 2001, Biden, then head of the Senate Foreign Relations Committee, supported China’s entry to the World Trade Organization. As he explained, “The United States welcomes the emergence of a prosperous, integrated China on the global stage, because we expect this is going to be a China that plays by the rules.” With currency manipulation, espionage, and theft of intellectual property, it didn’t exactly turn out that way.

On Biden’s watch as vice president, China ramped up internal repressions and became more aggressive, modernizing its military and creating island bases that put key U.S. allies and interests at risk. In 2020, on the anniversary of the Tiananmen Square massacre, Biden called for “recommitting to the universal struggle for human dignity” but offered no direct criticism of the Chinese regime.

Biden never offered the equivalent of former President Ronald Reagan’s “tear down this wall” speech, or his strategy on the Cold War, “we win, they lose.” In the escalating competition with China, Biden is afraid China might win. Biden is also on record that the “most lethal threat to the homeland today” is not China but “terrorism from white supremacy,” not even radical Islamic terrorism.

Biden may believe that China is indeed competition for the United States, but he’s never gone back on the “not bad folks” description. What Biden says on his own more accurately represents the Delaware Democrat than the speeches penned by his handlers.

Biden recently extended temporary safe haven for some Hong Kong residents in the United States. For their part, residents of Taiwan might wonder how the White House would respond should China move militarily against that nation. Would that be an occasion for the China-U.S. military-to-military “dialogue” that Biden’s mentor Tom Donilon wanted?

“Taiwan has no U.S. forces and no assurance that the United States will come to their defense if attacked by China,” Stephen Bryen explains. “Stability in the Pacific depends on strong and visible U.S. resolve and U.S.-led deterrence. That seems to be at risk right now. The signals coming from Washington are anything but positive.” That’s something the people of Afghanistan are certain to understand.

This article was also published in The Epoch Times