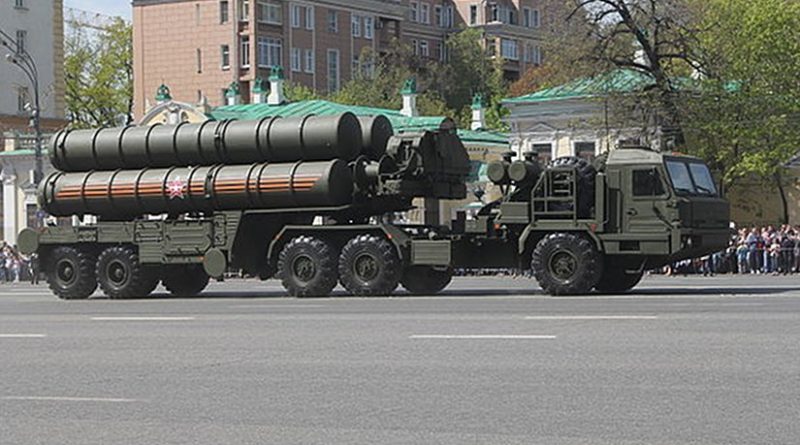 Recently, Turkey signed an agreement with Russia to purchase the S-400 Triumf air defence system. Turkey’s President Recep Tayyip Erdoğan told the Turkish media that Ankara has put down a deposit of US$2.5 billion on the sale after it found options from Western countries “too expensive.”Turkey will receive two S-400 batteries under the deal.

Many observers view the S-400 deal as a part of increasing military and political ties between Turkey and Russia and gradual estrangement between this key North Atlantic Treaty Organization (NATO) member and Western powers. Turkey has the second-largest army within NATO. This article examines the implications of the S-400 deal in the context of regional strategic dynamics.

Manufactured by the Russian arms firm Almaz-Antey, the S-400 system has a range of 400km (248 miles) and can shoot down up to 80 targets simultaneously, aiming two missiles at each target. It is a highly potent weapon system developed after the S-300 series of surface-to-air missiles and was first deployed by Russia in 2007. Russia also deployed the S-400 at the Hmeimim air force base near Latakia, Syria, in December 2015 after Turkish jets shot down a Russian Su-24 warplane on the Syria-Turkey border. The incident caused a major diplomatic rift between Moscow and Ankara, which was ‘remedied’ months later by President Erdoğan during a trip to St Petersburg.

It appears that NATO was not informed about the S-400 deal. The alliance reacted sceptically to the decision, saying the system was not compatible with its air defence systems as no NATO ally currently operates the S-400. However, some observers are viewing Turkey’s missile deal as a rebuff to NATO after the US and Germany withdrew Patriot air defence batteries from the country.

In 2015, Turkey urged its NATO allies to keep their Patriot batteries positioned on the Turkish-Syrian border. At that time, Germany, Italy, Spain, the Netherlands, and the US all had their missile systems deployed in Turkey. Currently, only Spain’s Patriot and Italy’s Aster SAMP/T batteries remain in Turkey, both of which are under NATO’s command and are integrated into the alliance’s air defence system. If the S-400 are procured, Turkey could have an air defence system operating outside NATO command.

Earlier in 2013, Turkey announced that a Chinese firm had won the bid to supply an air defence system, the FD-2000. However, in 2015, the US$3.4 billion deal was shelved entirely as a result of strong reactions from NATO members, primarily the US, due to questions of security and compatibility with NATO’s air defence framework.

The decision to buy the S-400, which will pose compatibility issues during its integration into NATO’s air defence system, appears to be less operational and more strategic. It is no surprise that Russia felt that the S-400 contract with Turkey was “strictly compatible with our [Russia’s] strategic interests.”

While Turkey has been establishing closer links with Russia after its recent souring of ties with the US and the EU, the former also objects to US military support for the Yekîneyên Parastina Gel (YPG) Syrian Kurdish rebels, who are linked to Kurdish insurgents in Turkey. The S-400 deal also took place before the next round of the Astana Process talks on Syria being held in Kazakhstan. The US, which has observer status at the talks, has been ‘locked-out’ from being the lead player in the process that is being driven by the interests of Iran, Turkey, and Russia.

Turkey’s neighbourhood is increasingly taking on a pro-Russia hue, with several of its neighbours improving their relations with Russia. Strengthened ties with Moscow are becoming an ever more important goal for Ankara, as Turkey no longer expects as much support from the US and the EU. With US lawmakers seeking to withhold the sale of F-35 Joint Strike Fighters to Turkey, it remains to be seen how the US will react to these developments, including by leveraging the new sanctions bill that imposes restrictions on US allies who buy Russian weapons.

India is another potential customer of the Russian S-400 air defence weapon system, as is China. India may note with some concern that the Turkish S-400 deal includes Russian consent to jointly produce the second of the two batteries purchased by Turkey. Pakistan and Turkey share a strong and active military relationship that includes arms purchases and weapon systems development. At the same time, arms purchases form a significant component of the India-Russia strategic partnership.

As Turkey moves closer towards Russia and further away from the West and NATO, it may increase its involvement in Central and South Asia, competing for influence with Saudi Arabia and the United Arab Emirates.

Furthermore, a stronger Russia-Turkey relationship could constrain the scope of common interests shared by both India and Russia, complicating India’s strategic choices in its neighbourhood.

This article was published at IPCS