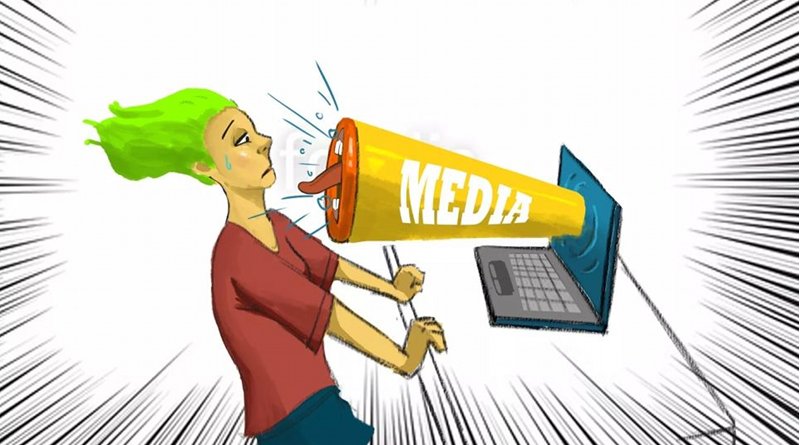 Sensationalism is unexpected news that has very strong influence on human’s sense, and later also on his/her perception. Sensationalism is characteristic for great changes of the orders (regimes, systems), and especially within the period when is not yet completely broken continuity with older order. This are most often times in which in society and state dominates non-controlled chaos, because nobody among authority on power does not have power to establish and order, security and stability, not even change or agreement about further strategy for development of the society and state.

Sensationalism destroys values and system of values and disorient and in wrong direction focus the public. Just to mention example of mass murderer Andreas Behring Breivik from Norway who got so much space in media and due to that, very soon had followers around the world. Does anybody know outside of Norway at least one name of his victim, among 77 murdered? No, but everybody knows his name!

The words “War is peace, freedom is slavery and ignorance is power.” From George Orwell book “1984” have found its realization in XX and XXI century when everything, within the power of sensation is mixed and equalized.

Of course, most dangerous use of sensations comes from the field of politics. With “methods of defactualisation” (representatives of the press, lobbyists) power uses within propaganda activity in the public field – a long time ago underline philosopher and political theorist Hannah Arendt – describing and analyzing Nazi propaganda during the time of getting into the power in Germany. In that way lying is brought into the politics.

Does the lying and deception can be justified? If you ask your friends, probably you will get several different answers. Some of the answers will – NEVER, and others will say that it depends on circumstances. The third ones will try to avoid answer on the question in a way that will very carefully note that the answer depends on the definition of the word lie. What about the ethics?

John Milton, within his work titled Areopagitica, published in 1644, stated very persuasive argument in support of the freedom of thoughts when he described truth and lie as rival at the market of ideas. Truth, Milton wrote, always wins in fair battle. But, if the truth so sacred, why sincerity is the first thing that suffers first if it is within our own interest? Answer partially lies within the fact that inclination to untruth is equally a part of human nature and social norms as telling the truth. As a matter of fact, the art of deception has the same ancient history as dedication to the truth.

Media sensations as modern cannibalism and Boundaries between sensationalism and satire

The goal of sensationalism is to deviate people’s attention from the essential questions and problems of common life. Behind sensationalism someone’s personal interest and special interest most of the is realized as general interest. Sensationalism deepen the crises and delays bringing of correct decision and public is destroyed and public opinion is poisoning. Everything is mixed and, in that way, devastate and destroy. Public lies, slander, media lynch muddy common sense, brings disturbance and anarchy, spread fear and fidget, disorientate, creates feeling of insecurity and disability.

Media sensationalism, when are in questions personal lives, gets characteristics of “modern cannibalism”? It is infesting on the personality up to the “bone”. Journalists and media become to be piranhas on dry land. It is created unbearable status of verbal and written terrorism, insignificance and unimportance that makes everything stultify. The public is converted into the mass and crowd starving for someone else’s divested personal life, stumbling and the lowest passions. Media sensationalism is the rule of insignificance, banality, vulgarity and brutality in public space.

Suitable instrument for the spreading of sensation and the domination of sensationalism on public scene is the media. Sensationalism counts on dangerous roles which ethical journalists should avoid and to use them: obedience, non-critical acceptation of the rules that violates standards of profession and demagogy. Ethical journalist should maintain his legitimacy by using critical thinking to dismiss search for scandals. Journalist should “love the truth in the measure in which philosopher love wisdom and must hate scandal as philosopher detest of the public”.

Those who are producing sensationalism counts on immature public, and they would like to keep it as it is, and even, if it is possible, to get it lower on the level of immaturity.

The French satirical magazine Charlie Hebdo is notorious for causing controversy. Long before the January 2015 attack on the publication’s journalists, cartoonists were raising eyebrows with images that some people found to be distasteful at best and racist at worst.

Apologists for the magazine have always responded by invoking the political power of satire, as well as the press’s right to free speech.

In September 2015, Charlie Hebdo was embroiled in another controversy, this one centering on the publication’s depiction of Syrian refugees struggling—often unsuccessfully—to make it safely to Europe. The social media sphere has exploded in debate, with some commentators asserting that Charlie is mocking Syrian refugees like 3-year-old Aylan Kurdi, and others declaring that the magazine is actually criticizing the European nations that have failed to help the Syrian migrants.

This debate raises ethical questions that are inevitably global in nature. As the media ethicist Stephen Ward argues, “Global power entails global responsibility.” This means that a globally recognized outlet like Charlie Hebdo doesn’t get to simply be a “French” magazine anymore, speaking only to a French audience. In fact, this publication can’t even claim to be strictly “European,” especially now that people around the world have held vigils, saying “We are all Charlie.”

It’s time for publications like Charlie Hebdo to stop pretending that they only have a national or regional audience. That means paying more attention to the diverse perspectives of an increasingly global public. It also means being more transparent about who and what these cartoons are actually for. If “we are all Charlie,” then Charlie might benefit from thinking about all of us.

It is very thin line between sensationalism and satire.

Given what the media have put the country through this past decade, it must come as a surprise to most Americans that the press has a code of ethics — Roger Mudd

Certain ethical scholars are uncompromising in defending of the truth as foundation value and they are following Kant’s point of view that lying by itself is wrong. Others are little bit flexible, but also insist on the heavy burden of evidence to justify a lie. Ethical scholar Sissela Bok sticks to, as she calls it, the principle of veracity, which does not reprobate every lie, but requests from moral agents to prove that their lies were necessary.

But, there are few reasons, why civilized society should accept devotion to the truth as foundation principle:

1. First, absence of integrity in communication between people, undermine individual autonomy. We, as rational beings depends on truthful and correct information on the basis of which we makes judgments about the whole series of actions, as the election of public officials, which products we should buy, which TV programs to watch, even whose kind of friends to choose. Please, let me mention, possible consequences of the fraud with fake movie critics which has been conducted by two directors of Sony pictures back in 2001. They invented movie critics “David Mening”, who wrote reviews of the movies

Hollow Man, Vertical limit, A Knight’s Tale i The Animal. When the fraud was discovered, directors were suspended for 30 days without salary, but that was not a big comfort for the readers of those reviews who thought that it was written by independent movie critics.

2. Second reason for the devotion to the truth is that by doing that shows respect of the personality as the goal, and as the gear with which can be manipulated. Deception usually puts personal interest above interest of others. Absence of the veracity within the process of communication puts receiver of untruthful information within inferior competitive position. Believing into the truth of the communication builds trust between individuals, as well as between individuals and institutions.

3. Finally, truth is of essential importance for democratic process. Democracy depends on informed citizens who approaches to the political and economic market with the knowledge that encourage analytical observation.

Transformation of the communication media most frequently comes because of the complex interlacing of the stated needs, competitive and political pressures and social and technological innovations. That is meadiamorphosis, defined by Roger Fidler, which helped all kind of varieties very much of journalism, including sensationalism, above all. Namely, growing up of all social networks, parallel with establishment of the wish of the manipulators, whatever their name was, to, through the already mentioned kind of sensational news, get access easier as possible to the public, helped very much development of media (il)literacy on a wider scale.