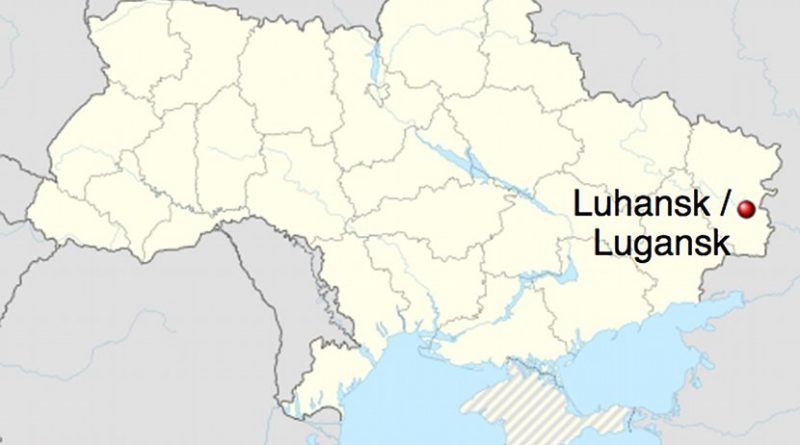 (RFE/RL) — Armed men in unmarked uniforms have taken up positions in the center of Luhansk in what appears to be part of a power struggle among the Russia-backed separatists who control the city in eastern Ukraine.

The region’s separatist leader, Igor Plotnitsky, said the display of force by the masked, rifle-toting men in camouflage was a revolt by supporters of a fired police chief.

The independent Russian newspaper Novaya Gazeta said they were blocking administrative buildings in the provincial capital.

The masked armed men began to deploy in Luhansk after Plotnitsky fired the region’s police chief, Igor Kornet, on November 20. The move did not appear to be in direct connection to the conflict with Ukraine’s government.

Hours later, Plotnitsky suggested that Kornet’s allies were whipping up tension and had put uniformed men into the streets.

“I can say with confidence that the attempts by certain people to stay in power by destabilizing the situation…are futile, and in the very near future will be neutralized,” Plotnitsky said in a statement.

Parts of the Luhansk and Donetsk regions are held by Russia-backed separatists whose war against Kyiv’s forces has killed more than 10,000 people since April 2014, when it erupted after Moscow fomented unrest following the ouster of Russia-friendly Ukrainian President Viktor Yanukovych.

In a statement posted on the Internet before Plotnitsky’s statement, Kornet dismissed what he called “rumors about my dismissal” and said that the situation in what the separatists call the Luhansk People’s Republic was “under the full control of forces of the law enforcement structures.”

In the statement, Kornet claimed that police had “thwarted the activity of a Ukrainian sabotage-and-espionage group” that he said tried to enter the separatist-held territory overnight to carry out “sabotage and terrorist acts.” He said that several people were detained and that police forces were “looking for other members of the group and their accomplices.”

Kornet said that a probe had been opened against the director of the Luhansk television and radio company, Anastasia Shurkayeva, on suspicion of cooperation with Ukrainian intelligence. He also said that investigations had been opened into the chief of Plotnitsky’s administration, Irina Teitsman, and the chief of the police unit responsible for security for members of the separatists’ de facto government, Yevgeny Seliverstov, on suspicion of involvement in an alleged attempt to seize power in September 2016.

Kornet said that Plotnitsky gave the order to launch the investigations, but there was no immediate word from Plotnitsky himself.