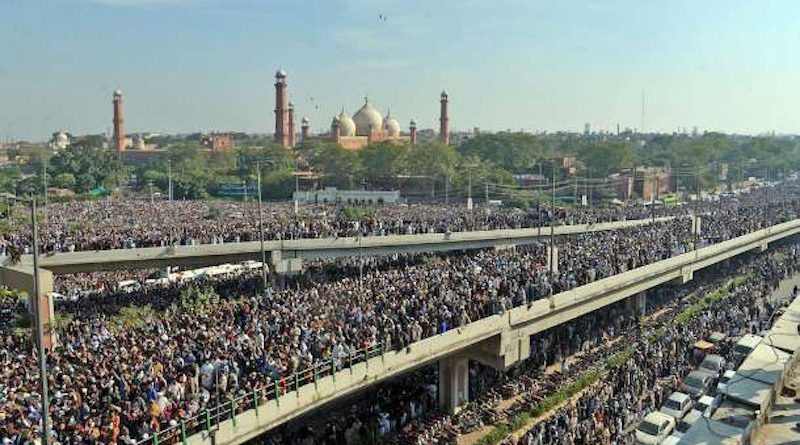 Millions of people took to the roads for the final journey of a hardline Pakistani cleric in what was described as the biggest funeral procession in the history of Lahore.

Traffic choked all entry points to the city and roads leading to the mosque of Tehreek-e-Labbaik Pakistan (TLP) chief Khadim Hussain Rizvi, who led protests against the 2018 acquittal of Catholic woman Asia Bibi after she spent eight years on death row on a blasphemy charge.

“Here I am, O Prophet of Allah” and “Beheading for the blasphemers” they chanted in tears.

Saad Rizvi, the cleric’s son and the new chief of TLP, which adheres to the Barelvi sect of Islam, took a pledge from mourners.

“I will forever remain sincere with the movement, Islam and Pakistan. I will sacrifice my life, money, children and everything, May Allah grants us steadfastness to follow all his laws. May we all take decisions of our life and authority according to the thought provided by our leader and pastor,” he said.

Khadim Rizvi, who sought Sharia law in Pakistan and believed all those found guilty of blasphemy should be put to death, died of a high fever and difficulty in breathing on Nov. 19, just days after leading a violent protest march to capital Islamabad against the publication in France of cartoons depicting the Prophet Muhammad.

Many believe the 54-year-old cleric contracted Covid-19 during the demonstration.

He was buried in the courtyard of a madrasa associated with the mosque where he was a prayer leader.

His critics denounced him in death.

“This #Rizvi was an Islamic terrorist who wanted to bomb Holland and put a fatwa on my head because of my #muhammad cartoon contest. He will be welcomed in hell today,” tweeted anti-Islam politician Geert Wilders, whose Freedom Party is the second biggest in the Dutch parliament.

Professor Taimur Rehman, a political activist and member of liberal rock band Laal, compared the photos of Rizvi’s funeral with the state funeral of Abdul Sattar Edhi, a Muslim humanitarian.

“Some people worried about SOPs [standard operating procedures]. I’m worried about religious extremism destroying our society,” he stated in a Facebook post.

According to Farooq Tariq, a labor activist, the funeral procession proved the power of religious extremists.

“Everybody knows that TLP has been supported by the establishment. The disease which caused his sudden death has been made a secret. State officials never stopped millions gathering from around the country amid the corona spread, whereas the government wants to stop the opposition’s upcoming Peshawar rally,” he said.

“This funeral depicts state hypocrisy. It is clear that society has further declined towards religious extremism. This is a serious challenge. Whoever promotes extremism is affected by it.”

Rizvi was often condemned in Catholic seminars for terrorizing religious minorities, stirring sectarian resentments and inciting riots. He called for the nuclear destruction of some European countries for insulting the Prophet Muhammad.

In 2018, Rizvi was charged with sedition and terrorism for staging violent protests after Asia Bibi was acquitted of blasphemy after spending eight years on death row.

Blasphemy against the Prophet Muhammad carries a mandatory death sentence in Pakistan. The state has not carried out any execution for this, but several people accused of blasphemy have been killed, some in prison or before trials ended. Blasphemy against the Quran is punishable with life imprisonment.

Church leaders have long claimed that blasphemy laws are abused for personal gain and that religious extremists are furthering their agenda by abusing the laws.

In July 2018, an anti-terrorism court indicted the prime suspects in the shooting of former interior minister Ahsan Iqbal., who survived after being shot twice in the arm during a meeting of the party in Narowal district. Police said in an interrogation report that the arrested gunman was a TLP youth leader.

In 2017, Federal Law Minister Zahid Hamid voluntarily resigned from his post after a failed operation by security agencies to clear a key intersection in Islamabad occupied by TLP supporters. At least six people were killed and scores were injured after Islamist protesters clashed with law enforcement agencies in Islamabad, Karachi and other cities.

Hamid had been blamed for a constitutional amendment, later withdrawn, that would have allowed members of the Ahmadiyya sect to vote as Muslims. The sect has been accused by mainstream Muslims of not recognizing Muhammad as the final prophet.

In 2016, Rizvi opposed the execution of Mumtaz Qadri, a police commando who assassinated liberal Punjab governor Salman Taseer for his stance on Pakistan’s blasphemy laws.

“All girls will be married at the age of six in line with the sayings of the Prophet Muhammad [known as hadith] and Islamic jurisprudence [fiqh],” Rizvi said at a recent rally held in the port city of Karachi.

Using a derogatory word for Christian sanitation workers, he said: “Churha will also be made to recite the Islamic proclamation of faith [kalma].”