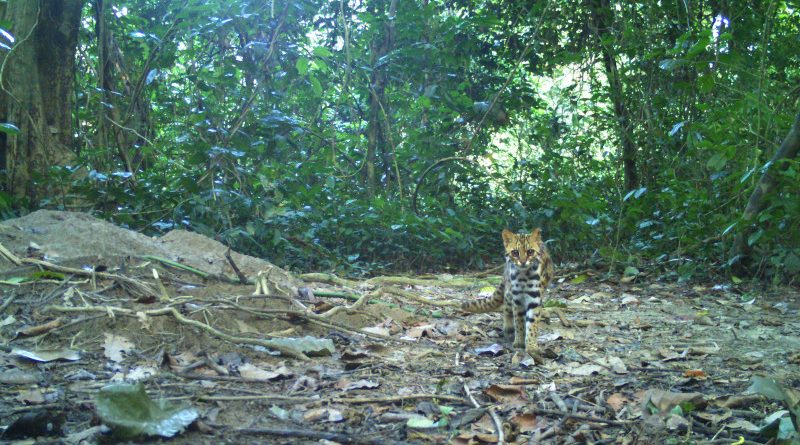 Leopard cat in protected forests of India. According to the new findings, while being the species with the highest percentage of suitable habitat protected compared to other three wild cat species, only 8% of adequate habitat is covered by protected areas. The species is also more likely to lose suitable habitat with ongoing climatic changes compared to other small wild cat species. Photo credits: André P. Silva, Surabhi Nadig and Navya R.

The Indian subcontinent is a hotspot for wild felines. A new study headed by Uppsala University now shows that only 6–11 percent of the areas where three rare cat species have their habitat are protected. Lack of knowledge about these species has been an obstacle to understanding their needs for reserves. The research is presented in the journal Scientific Reports.

Over a third of the world’s cat species inhabit the Indian subcontinent. In the new study, the researchers have explored the situation of the Prionailurus genus. It includes the rusty-spotted cat (P. rubiginosus), found in this region alone, which seems to thrive best in broadleaved forests; the fishing cat (P. viverrinus), a species associated primarily with wetlands, mangrove swamps and coastal areas; and the leopard cat (P. bengalensis), which has been observed mainly in tropical and subtropical forest areas.

“This study is important because it shows that many small, rare and elusive cats in the Indian subcontinent don’t get as much attention as the more spectacular big cats. Nevertheless, the need to protect them is just as pressing, so the number and size of the protected areas must be increased to include more biotopes containing these species,” says Mats Björklund, Professor Emeritus of Zooecology at Uppsala University.

Using the geographic coordinates of sites where the various species have been seen over the years, and more recent information collected from camera-trap surveys, the scientists were able to develop ecological niche models. These could then be used to identify zones with environmental conditions that, to a high degree, suit these species individually. These models also enabled the researchers to gain a better understanding of ecological factors, such as climate, land cover and land use, that restrict or favour the occurrence of a species – information of the utmost importance for future conservation measures.

The scientists were also able to see that the most severe threats vary for the species included in the study. The leopard cat, for example, is most threatened by a warmer climate since parts of its range, such as the mountainous areas in the Western and Eastern Ghats, are clearly beginning to develop higher temperatures than this species can withstand. The rusty-spotted cat, on the other hand, is limited mainly by human cultivation of the land, especially in areas of intensive irrigation. This is of particular concern because the proportion of farmland in the region is rising. The fishing cat seems to be the Prionailurus species that, to date, has had the smallest proportion of its habitat protected.

Small, shy and rare cats have the greatest need for protection. The results of this study show that, although the species studied are closely interrelated, they respond differently to environmental change. Accordingly, to cover their main biotopes, future protection must cover larger areas and more habitats accessible to these species.

“Some of these species, like the fishing cat, are extremely rare and probably need protection for long-term survival. The fact that only a very small proportion of the most suitable habitat for this species is protected is a warning sign that the protected-area network in the Indian subcontinent needs to be reviewed. Species like the rusty-spotted cat exist only in this region, so to ensure we don’t lose them it’s essential to create more protected areas,” says André P. Silva, a doctoral student at the Department of Ecology and Genetics at Uppsala University and the study’s lead author.