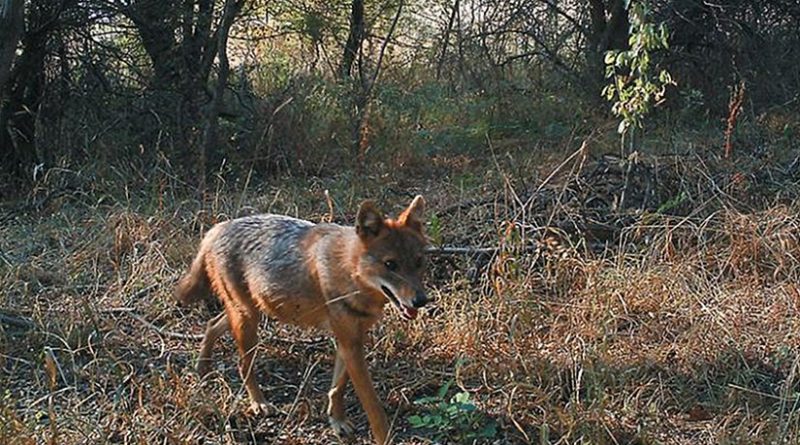 This is a photograph of the golden jackal (Canis aureus) individual in the summer. Credit: Klára Pyšková

The first living golden jackal in the Czech Republic was reported by researchers from Charles University, Prague. The scientists captured the canid on camera multiple times over the span of a year and a half some 40 km away from the capital. Once considered native to northern Africa and southern Eurasia, the species seems to be quite rapidly extending its range towards the north of Europe. The study is published in the open access journal ZooKeys.

In June 2015, while doing a research project for her Master’s degree in Central Bohemia, Czech Republic, Klára Pyšková, a student at the Department of Ecology, Faculty of Science of Charles University in Prague, produced the first photograph of a living golden jackal individual captured by a camera trap in the country.

The aim of her study was broader, addressing common carnivore species composition in different habitats typical for central European landscape, about 40 km away from Prague. While the golden jackal capture was not completely unexpected, since several individuals of this species had previously been reported from the country, it was still a surprising discovery – all previously observed animals were either shot or victims of roadkill, and considered rather incidental records.

“The habitat, where the golden jackal decided to settle, resembles the landscapes which these animals prefer in their natural distribution area, the Balkans – an open grass-shrubland surrounded by a forest. It is one of the warmest areas in the country, with mild winters. The observed animal was mostly active at dusk and dawn, with majority of the sightings occurring in the morning hours,” explained Klára Pyšková. In a paper, she co-authored with a group of researchers from Charles University and Institute of Botany of the Czech Academy of Sciences, among them her supervisors Ivan Horáček and David Storch, they report on a long-term monitoring of the animal in an area of approximately 90 km².

The golden jackal first reached the Czech republic in the late 1990s, probably coming from Austria. The first, albeit unconfirmed report of its presence is from May of 1998, of two individuals reportedly sighted in central Bohemia. Almost a decade later, in 2006, a carcass of an adult golden jackal was found by the side of the road in Moravia, the eastern part of the country.

Since then, several verified and non-verified records have been made. The photographs captured by Klára Pyšková were the first evidence of a living individual that seems to have settled permanently in the country. The researchers have not observed any cubs or a mate, and although they cannot completely dismiss the occurrence of another individual, they consider it very unlikely. The sex of the animal could not be determined.

“While the golden jackal is a species that has historically never lived in the area, where the study was conducted, and, therefore, might not be appropriate to call it native, it cannot be considered invasive. Invasive species are those that have been intentionally or unintentionally brought to a new area by humans – this is not the case of the golden jackal here,” said Klára Pyšková.

“This being said, there are several factors that have likely facilitated the spread, including indirect human influence,” added the researcher. “Ongoing global change is bringing about shifts in species distributions that include both the spread of populations of invasive species and range expansions or contractions of native biota. In Europe, this is typically reflected in species moving from the south-eastern part of the continent to the north-west, most often in response to increasing temperatures that allow organisms to colonize areas that were previously unsuitable. Other suggested factors are human-caused changes in the overall character of landscapes, the lack of natural predators, particularly wolves, and high adaptability of the species.”

Home » Golden Jackals Might Be Settling In Czech Republic