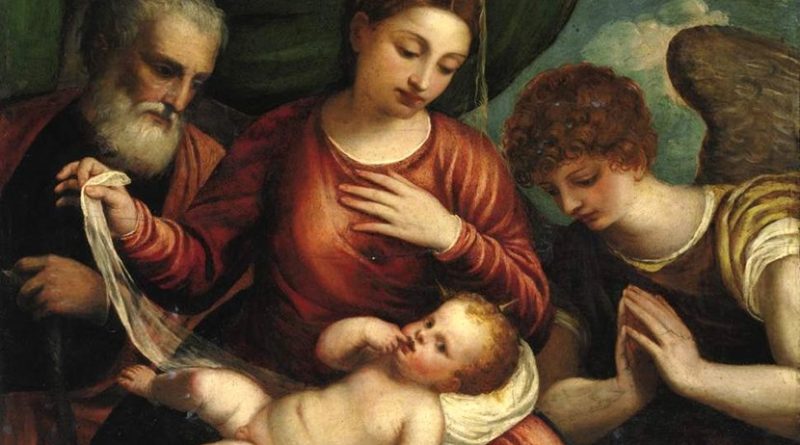 Detail of Holy Family with an Angel, c. 1540, by Polidoro da Lanciano

By Rev. Robert A. Sirico*

The culmination of the Advent season prompts many of us to revisit seasonal traditions established by our ancestral heritage and respective faiths with dashes of contemporary culture. For my family growing up, the traditional Italian celebration of Christmas was decidedly Roman Catholic, by which I mean we began honoring the anticipation of the birth of Christ in the quiet observance of Advent. The season didn’t end for us until the Feast of the Epiphany on January 6, which my mother always called “little Christmas.” Our tree came down only after that.

During this period of time, we were reminded constantly of the birth of Christ by the presence of wreaths, trees and presipi – handcrafted nativity scenes depicting the abject poverty in which the Lord our Savior was born while, at the same time, displaying the fundamental glory and dignity of God-become-Man, who insinuated himself into our material circumstance

More recently, many families have adopted personal traditions that may include attending church services more regularly, watching holiday-themed movies, enjoying special meals or participating in charitable acts benefiting the less fortunate. Although I wish attending religious services remained a priority for all families throughout the year, my experience as a parish priest, unfortunately, belies such hope.

That said, I’m always encouraged when I see my relatives, friends, co-workers and parishioners embrace their families in the celebration of Christmas each and every year in their own inimitable fashion. Each family in their own way reflects the presipi – for it is the intact family unit that best inoculates our society against poverty and its incumbent ills.

Yet, poverty persistently plagues even the most developed countries despite significant reductions rendered by medical, agricultural and technological advancements. It’s amazing to consider what my great friend, the late Michael Novak, wrote shortly before he passed earlier this year:

In 1776, there were fewer than one billion people on Earth. A vast majority of them were poor, and living under tyrannies. Just over two centuries later, there are more than seven billion human beings. Rapid medical discoveries and inventions have helped to double the average lifespan, vastly reduce infant mortality, and provide relief for hundreds of diseases.

Thanks to economic progress, six-sevenths of the greatly expanded human race has now broken free from poverty – over a billion people from 1950 to 1980, and another billion since 1980. But there are another billion more still in those chains. The Jewish, Christian, and humanist task is to break them free as well.

If I may borrow another quote, this time from the man whose name we adopted for the mission we faithfully and diligently accepted 27 years ago, Lord Acton: “Opinions alter, manners change, creeds rise and fall, but the moral law is written on the tablets of eternity.” In other words, it is our duty as servants of God and his creation to assist the poor – and to explore the best ways to attain the moral goal of eliminating the greatest amount of poverty here in this country as well as throughout the world.

The Acton Institute promotes a free and virtuous society not because it’s a phrase that simply is pleasing to the ear. We know from empirical experience that a society grown from the roots of freedom and watered regularly with virtue yields tremendous benefits for all men, women and children rather than merely a select group.

As we reflect on the real meaning of Christmas, we will unavoidably realize how seriously God takes the material world which he made, and how redemption, in the Christian understanding, is accomplished precisely through and within this material world.

May this inspire each of us to see our work as an extension of that sanctification of the world and the source of well-being, prosperity, and indeed, peace on Earth.

About the author:
*Rev. Robert A. Sirico received his Master of Divinity degree from the Catholic University of America following undergraduate study at the University of Southern California and the University of London.  During his studies and early ministry, he experienced a growing concern over the lack of training religious studies students receive in fundamental economic principles, leaving them poorly equipped to understand and address today’s social problems.  As a result of these concerns, Fr. Sirico co-founded the Acton Institute with Kris Alan Mauren in 1990.

Home » On The Real Meaning Of Christmas – OpEd