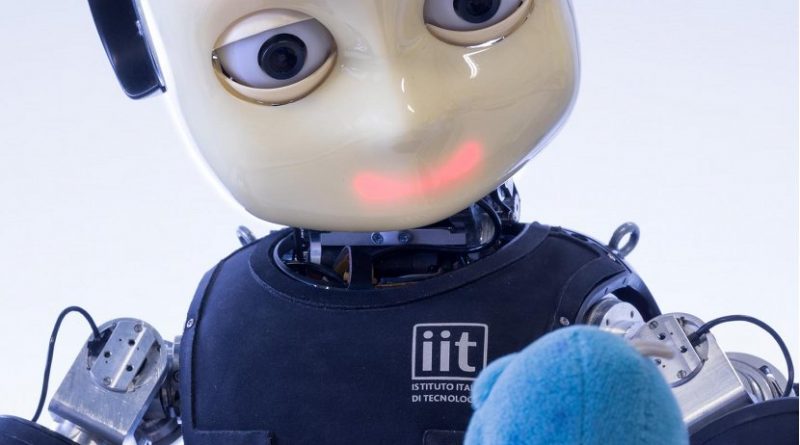 iCub is a robot child whose project is coordinated by IIT-Istituto Italiano di Tecnologia. It is a standardized common open-source platform for research on embodied artificial intelligence (AI). iCub is able to crawl on all fours, sit-up, balance walk, interact physically with the environment and recognize objects. It is one of the few robots in the world with a sensitive full-body electronic skin system to provide the sense of "touch". Credit: IIT-Istituto Italiano di Tecnologia

Robotic research benefited in the last ten years of a standardized common open-source platform for research on embodied artificial intelligence (AI): the humanoid robot iCub. Born in Italy, today it is available in 36 copies in laboratories across Europe, USA, South Korea, Singapore and Japan and more than hundred researchers worldwide contribute to develop its skills. Researchers at IIT-Istituto Italiano di Tecnologia coordinating this effort, focused on the importance of such a research platform in a paper published today on Science Robotics, special issue about humanoid robotics.

“iCub: the not-yet finished story of building a robot child” (Natale et al.) is a review of the evolution of the iCub robot from its origin to date. It shows the co-evolution of hardware and software according to research needs, and highlights the benefit for roboticists, namely, reusing and improving the results of one another towards the goal of creating machines that are more intelligent.

iCub was born in 2004, as part of an European project coordinated by IIT and its design has been changing in three different versions (iCub 1.0, iCub 2.0 and iCub 3.0) integrating state of the art robotics research results. Research activities explored the whole spectrum of AI-related areas, ranging from control to machine learning, human-robot interaction, and language acquisition.

“In our review paper, we underline what we learnt so far by working on building a community of Open Source roboticists. The first take-home message is that researchers needed a standard platform for research in humanoid robotics. Reusing software created by others, replicating experiments, and benchmarking are important elements of robotics research. The standard platform is the enabler” said Giorgio Metta, Vice Scientific Director at IIT-Istituto Italiano di Tecnologia and coordinator of the iCub Facility. “The second take-home message is that hardware and software co-evolution is fundamental to keep both at the state-of-the-art”.

The current humanoid has the size of a 5-year-old child (104 cm tall, 29 kg weight), which is able to crawl on all fours, sit-up, balance walk, interact physically with the environment and recognize objects. It is one of the few robots in the world with a sensitive full-body electronic skin system to provide the sense of “touch”.

The first iCub design (iCub 1.0) focused on the hands and their manipulation skills. The second version (iCub 2.0) targeted whole-body control: legs included series elastic actuators and larger feet to improve walking stability; stereoscopic vision and feaster eye and head movement allow better visual perception of the world; the skin system was integrated, providing the iCub with more than 4000 conformable sensors. This version allowed investigating human-robot interaction (HRI) in terms of joint-attention in the form of gaze-cueing effects, and to develop whole-body controllers, which enabled the robot to interact physically with environment in tasks such as balancing, getting up, push and recovery, and walking. The third and most recent version of iCub (iCub 3.0) further improved the legs to generate more natural steps and integrated two-event driven cameras to optimize vision and object recognition.

“iCub version 3.0 is in the making, but we are planning yet another revision originated from requests to use the robot in the clinical setting, in particular, to design HRI experiments and training for children diagnosed with Autism Spectrum Disorder (ASD). Here we need robustness because of the expected continuous physical interaction with children. Hence, we are designing new simpler hands and a user-friendly interface for therapist to set up experiments” added Giorgio Metta.

During the development of the iCub, the software evolved as well. Presently, its middleware, YARP, consists of about 400.000 lines of code, providing the basic robot interfaces and reaching as far as kinematics, dynamics and vision libraries. The repositories amount to more than 4 million lines of code. In the past year, more than 160 developers actively contributed by writing new code, debugging and producing new complex experiments using the iCub. This makes the iCub project one of the largest open-source teams in the world.