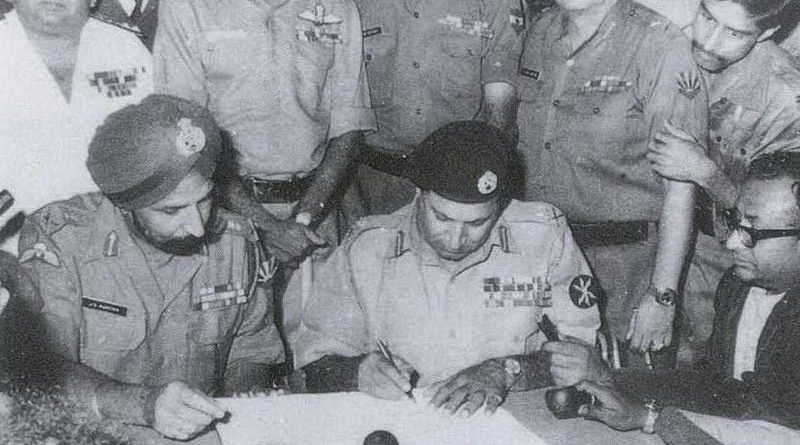 Dec. 16 is Victory Day in Bangladesh. On this day in 1971, some 93,000 Pakistani soldiers settled for an unconditional surrender to India-Bangladesh joint forces in Dhaka that led to the emergence of a new nation state in South Asia.

The bloody nine-month Bangladesh Liberation War from March 25 to Dec. 16 was a crucial defining chapter in the history of the Indian subcontinent and a pointer to the historic blunder of the partition of India and Pakistan along religious lines in 1947.

Bangladeshi fighters defeated Pakistan with the support of its arch-enemy India, which was drawn into the war as over 10 million refugees overwhelmed its territory.

Pakistan’s military and its local collaborators, including Islamist militias, were accused of killing three million people in what was then East Pakistan, raping 200,000 women and committing the most horrible war crimes in one of the worst genocides of the 20th century.

One of the darkest chapters of the war was the abduction, brutal torture and massacre of over 1,000 Bengali intellectuals including teachers, doctors, journalists, writers and cultural artists by the military and Islamic militias for supporting Bangladesh independence. It was a Gestapo-style killing mission seeking to eliminate the brightest sons and daughters to cripple the emerging nation

Pakistan never officially apologized to Bangladesh for the military atrocities of 1971 when its leadership sought a genocidal solution to a political crisis.

Relations between the nations have been bitter and cold in the past decades. There were some attempts to normalize ties, but the unwillingness of successive Pakistani governments to offer an apology never let it happen.

Analysts say several factors, including a fear of huge reparations and a backlash from the powerful military and political establishments, have held back Pakistan from issuing an apology.

Relations have further soured since 2013, when Bangladesh started prosecuting and executing more than a dozen leaders of the country’s largest Islamist party, Jamaat-e-Islami, for 1971 war crimes — a long-standing popular demand for national healing from the wounds of the war.

The war crimes tribunal was important for Bangladesh because Pakistan never prosecuted its leadership and military commanders for war crimes as promised when its troops were extradited in exchange for repatriation of Bengali migrants after the war.

Pakistani politicians expressed dismay publicly and in parliament over war crime trials and executions, angering Bangladesh. Pakistan’s position on trials was a pointless attempt to meddle in the domestic affairs of an independent nation and showed it has yet to admit its faults over the war, let alone offer a heartfelt apology.

In Pakistan, the younger generation are more eager to confront the bitter past including 1971 and improve the international image still tainted by it. They also wish to get away from the legacy of an Islamist-military unholy alliance that still plagues the nation.

However, many of the older generation are less inclined as they still consider Bangladesh independence a result of Indian conspiracy instead of Bengali people’s genuine struggle for self-determination and emancipation from neo-colonialist, Islamic Pakistan.

1971 is an emotive issue in Bangladesh that continues to shape political, social, economic, cultural and even religious discourses. People, irrespective of faith and ethnicity, supported, sacrificed and fought for independence.

Anyone speaking ill of independence is viewed as a blasphemer, while any entity, whether social, political or economic, that has the slightest dispassion about the spirit of the war is considered suicidal and self-destructive. Islamist collaborators with Pakistan’s army like the Jamaat-e-Islami leaders are still hated as traitors. That is why political Islamists have never been a strong force in Bangladesh.

During the war, minority Hindus were the worst sufferers due to Pakistan’s hatred for India, which was accused of breaking Pakistan. Hindus made up the majority of refugees who fled to India during the war. Most returned but many were scared and stayed there.

Christians, who make up roughly 600,000 of Muslim-majority Bangladesh’s population of more than 160 million, have been overwhelmingly in favor of independence. They also denounced the repressive Pakistan regime and felt they would be more at home in secular and pluralistic Bangladesh than in the Islamic state.

In retaliation, Christians were massacred and villages were burned down by the military and their local collaborators. Three Catholic priests including two foreigners were shot dead.

Thus, the issue of apology also reverberates in the Christian community and they too strongly demand Pakistan should apologize for atrocities committed in 1971.

For the victims, families and relatives of the war, many still alive, an apology from Pakistan amounts to justice for the horrific atrocities they suffered.

Since cricketer-turned-politician Imran Khan became Pakistan’s prime minister, there have been louder calls in Bangladesh and abroad for the long overdue apology. Some even suggested Bangladesh should file cases in international courts against Pakistan for the cause and even break all diplomatic relations.

Khan has shown renewed interest in forging better relations with Bangladesh recently. In July, he made an unusual call to Bangladeshi Prime Minister Sheikh Hasina to discuss flooding, the coronavirus pandemic and better bilateral and regional cooperation.

And, after nearly two years, Bangladesh finally accepted the credentials of Imran Ahmed Siddiqui as Pakistan’s high commissioner to the country. Siddiqui also recently met with Hasina in an apparent effort to improve relations.

Such gestures are welcome, but with the wounds of 1971 still fresh in the public psyche in Bangladesh, it would be impossible for Pakistan to improve ties without a formal apology. Moreover, it would be an important boost for Bangladesh to sustain its secular and pluralistic nature against creeping radicalism.

On the other hand, it can improve Pakistan’s image internationally and empower itself as it struggles to overcome a powerful military, religious fanatics and a fragile democracy.

As Bangladesh kicks off year-long celebrations of the 50th anniversary of independence, Pakistan’s leadership needs to do some serious soul searching to decide on whether it can shed its ego with an apology to move forward or continue to nurture the ghosts of the past.

*Rock Ronald Rozario is the bureau chief of UCA News in Dhaka, Bangladesh. The views expressed in this article are those of the author and do not necessarily reflect the official editorial position of UCA News.