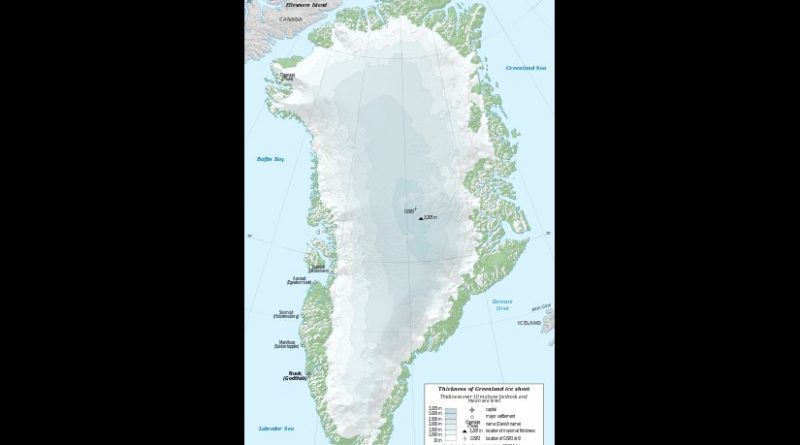 The influx of fresh water from the Greenland ice sheet is “freshening” the North Atlantic Ocean and could disrupt the Atlantic Meridional Overturning Circulation (AMOC), an important component of global ocean circulation that could have a global effect, according to Scientists from the University of South Florida, along with colleagues in Canada and the Netherlands.

Researchers say it could impact the future climate in places such as portions of Europe and North America.

Their study on the influence of freshwater influx on Labrador Sea convection and Atlantic circulation is published in a new issue of the journal Nature Communications.

“We derived a new estimate of recent freshwater flux from Greenland using updated GRACE satellite data,” said USF professor Tim Dixon. “The data suggest that the influx of freshwater from Greenland is accelerating, and has changed the Labrador Sea in ways that could lead to a weakening of the AMOC.”

How much of the enhanced freshwater flux actually winds up in the Labrador Sea?

Because of the clockwise nature of ocean circulation around Greenland, most of the freshwater increase, up to 70 percent, is being driven toward the Labrador Sea, magnifying its impact and increasing the possibility of significant effects on the AMOC, said Qian Yang, the paper’s first author and a PhD student at USF whose dissertation, in part, includes this research.

According to the researchers, not only are changes in the AMOC difficult to measure, it’s also difficult to separate natural climatic variation from climate changes induced by human activity.

The potential consequences of a weakened AMOC include changes in climate.

“The AMOC transports a large amount of heat into the North Atlantic where it is given up to the atmosphere and helps regulate the climate in Europe and North America. The major effect of a slowing AMOC is expected to be cooler winters and summers around the North Atlantic, and small regional increases in sea level on the North American coast,” explained Chambers.

According to Dixon, the global impacts are less certain, but potentially more consequential.

“The AMOC and Gulf Stream are part of a complex global ocean circulation system that is still not completely understood,” said Dixon. “If human activities are starting to impact this system, it is a worrying sign that the scale of human impacts on the climate system may be reaching a critical point.”

Continued long-term observation is required to understand the impact of the freshwater influx.

“This shows the need to continue to look at different components of the climate system, including the ice sheets and oceans, in an integrated sense,” concluded Paul Myers, study co-author and Professor of Oceanography at the University of Alberta.