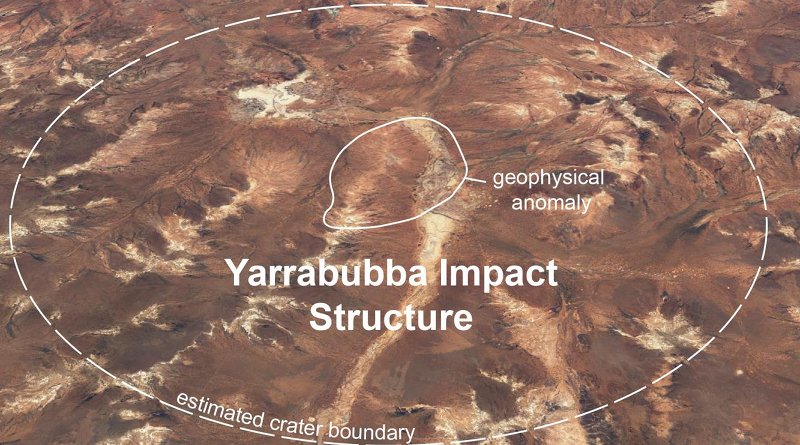 Curtin University scientists have discovered Earth’s oldest asteroid strike occurred at Yarrabubba, in outback Western Australia, and coincided with the end of a global deep freeze known as a Snowball Earth.

The research, published in the leading journal Nature Communications, used isotopic analysis of minerals to calculate the precise age of the Yarrabubba crater for the first time, putting it at 2.229 billion years old – making it 200 million years older than the next oldest impact.

The team inferred that the impact may have occurred into an ice-covered landscape, vaporised a large volume of ice into the atmosphere, and produced a 70km diameter crater in the rocks beneath.

Professor Kirkland said the timing raised the possibility that the Earth’s oldest asteroid impact may have helped lift the planet out of a deep freeze.

“Yarrabubba, which sits between Sandstone and Meekatharra in central WA, had been recognised as an impact structure for many years, but its age wasn’t well determined,” Professor Kirkland said.

“Now we know the Yarrabubba crater was made right at the end of what’s commonly referred to as the early Snowball Earth – a time when the atmosphere and oceans were evolving and becoming more oxygenated and when rocks deposited on many continents recorded glacial conditions”.

Associate Professor Nicholas Timms noted the precise coincidence between the Yarrabubba impact and the disappearance of glacial deposits.

“The age of the Yarrabubba impact matches the demise of a series of ancient glaciations. After the impact, glacial deposits are absent in the rock record for 400 million years. This twist of fate suggests that the large meteorite impact may have influenced global climate,” Associate Professor Timms said.

“Numerical modelling further supports the connection between the effects of large impacts into ice and global climate change. Calculations indicated that an impact into an ice-covered continent could have sent half a trillion tons of water vapour – an important greenhouse gas – into the atmosphere. This finding raises the question whether this impact may have tipped the scales enough to end glacial conditions.”

“Our findings highlight that acquiring precise ages of known craters is important – this one sat in plain sight for nearly two decades before its significance was realised. Yarrabubba is about half the age of the Earth and it raises the question of whether all older impact craters have been eroded or if they are still out there waiting to be discovered,” Dr Cavosie said.