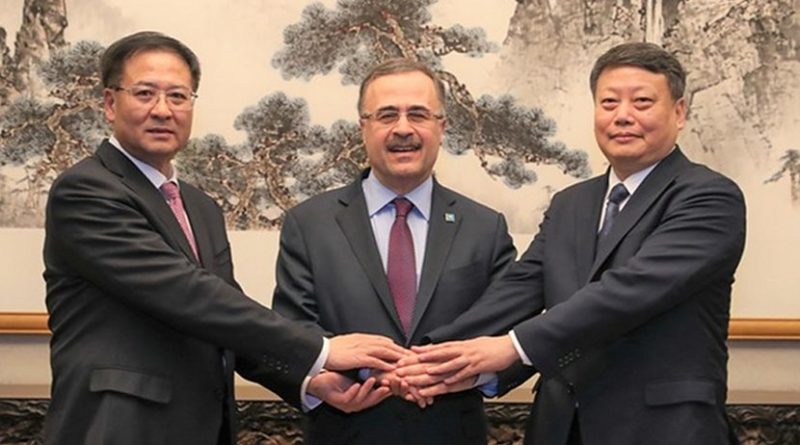 During a visit by Crown Prince Mohammed bin Salman to Beijing, Saudi Aramco on Friday signed a deal worth more than $10 billion for a refining and petrochemical complex in China.

The Saudi delegation, including top Aramco executives, arrived in China on Thursday as part of an Asian tour that included India and Pakistan.

The deal aims to set up a joint venture with Chinese conglomerate Norinco to develop a refining and petrochemical complex in the northeastern city of Panjin in Liaoning province.

The partners would form the Huajin Aramco Petrochemical Co. as part of a project that would include a 300,000-barrel-per-day (bpd) refinery with a 1.5-million-metric-ton-per-annum (mmtpa) ethylene cracker, Aramco said.

The total value of the project is more than $10 billion, making it the largest Sino-foreign joint venture, it added.

Aramco will supply up to 70 percent of the crude feedstock for the complex, which is expected to start operations in 2024.

The investments could help Saudi Arabia regain its place as the top oil exporter to China, a position Russia has held for the last three years.

Aramco is set to boost its market share by signing supply deals with non-state Chinese refiners.

“Our agreement with Norinco and Liaoning province is a clear demonstration of Saudi Aramco’s strategy to move from beyond a buyer-seller relationship, to one where we can make significant investments to contribute to China’s economic growth and development,” said Aramco CEO Amin Nasser.

“Our participation in the integrated refining and petrochemical project in Panjin will strengthen our collaborative efforts to enhance energy security, revitalize key growth sectors and industries in Liaoning, and also meet rising demand for products and goods in China’s northeast region.”

There are additional plans to set up a fuels retail business, which will further integrate into the value chain, Aramco said.

By the end of 2019, a three-party company is expected to be formed between Aramco, North Huajin and the Liaoning Transportation Construction Investment Group Co. Ltd. to develop a retail fuel station network in the target markets.

Aramco also signed three memorandums of understanding aimed at expanding its downstream presence in Zhejiang province, one of the most developed regions in China.

Aramco aims to acquire a 9 percent stake in Zhejiang Petrochemical’s 800,000-bpd integrated refinery and petrochemical complex, located in the city of Zhoushan.

The first deal was signed with the Zhoushan government to acquire its 9 percent stake in the project.

The second agreement was signed with Rongsheng Petrochemical, Juhua Group and Tongkun Group, which are the other shareholders of Zhejiang Petrochemical.

Aramco’s involvement in the project will come with a long-term crude supply agreement, and the ability to utilize Zhejiang Petrochemical’s large crude oil storage facility to serve its customers in the Asian region.

An integral part of the project includes a third agreement with Zhejiang Energy to invest in a retail fuel network.

The companies plan to build a large-scale retail network over the next five years in Zhejiang province.

The retail business will be integrated with the Zhejiang Petrochemical complex as an outlet for the refined products produced.

Nasser said the agreements “demonstrate our commitment to the Chinese market and help enhance the strategic integration of our downstream network in Asia. They will further strengthen our relationship with China and Zhejiang province, setting the stage for more cooperation in the future.”

The first phase of the project will include a newly built 400,000-bpd refinery with a 1.4-mmtpa ethylene cracker unit and a 5.2-mmtpa aromatics unit.

The second phase will see a 400,000-bpd refinery expansion, which will include deeper chemical integration than the first phase.