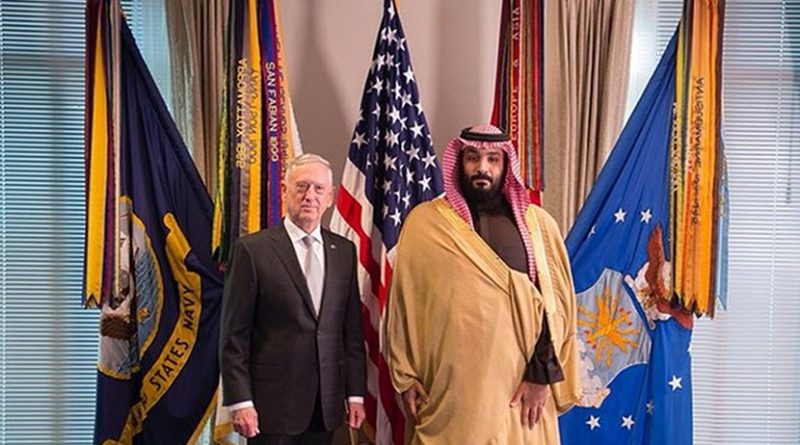 US Defense Secretary Jim Mattis on Thursday said Saudi Arabia was “part of the solution” in Yemen, where the Saudis are leading a US-supported military campaign against Houthi rebels.

Mattis told reporters at the Pentagon on Thursday that there was an urgent need to find a political solution to Yemen’s war, as he voiced hope for a UN special envoy’s peace efforts.

“We must also reinvigorate urgent efforts to seek a peaceful resolution to the civil war in Yemen and we support you in this regard,” Mattis said, offering his firm backing to Riyadh.

Asked by reporters at the start of his talks whether he would raise the issue of civilian casualties in Yemen, Mattis said: “We are going to end this war, that is the bottom line. And we are going to end it on positive terms for the people of Yemen but also security for the nations in the peninsula.”

Mattis spoke at the start of a Pentagon meeting with Saudi Crown Prince Mohammed bin Salman, who is on a three-week US visit.

Earlier this week the Senate debated and then shelved a resolution calling for an end to US support for the Saudi-led coalition in Yemen. Mattis had opposed the measure, saying it would be counterproductive by increasing civilian casualties, jeopardizing counterterrorism cooperation and emboldening Iran to increase its support for Houthi rebels.

During the photo-taking session with the crown prince, Mattis was asked by a reporter whether he would raise concerns about casualties in Yemen. Mattis said the US is working with the UN’s new envoy to Yemen, Martin Griffiths of Britain, in pursuit of a political solution to the civil war in Yemen.

“We believe that Saudi Arabia is part of the solution,” Mattis said. He added: “They have stood by the United Nations-recognized government, and we are going to end this war. That is the bottom line. And we are going to end it on positive terms for the people of Yemen but also security for the nations in the peninsula.”

In prepared remarks, Mattis said the US has a strong relationship with Saudi Arabia in fighting extremists and deterring malign activities by Iran. He said a political settlement in Yemen would protect Saudi Arabia and deny safe haven to terrorists.

“Your significant amounts of humanitarian aid is critical to help the innocent caught up in this conflict (and) we applaud you for that,” he told the crown prince.

The Saudi Press Agency reported that the meeting between the Saudi Crown Prince and Mattis discussed their countries’ strategic cooperation and means to improve bilateral relations according to Saudi vision 2030. The two leaders also reviewed their efforts to combat terrorism and extremism, as well as ways to improve secutrity and stability in the Middle East region.