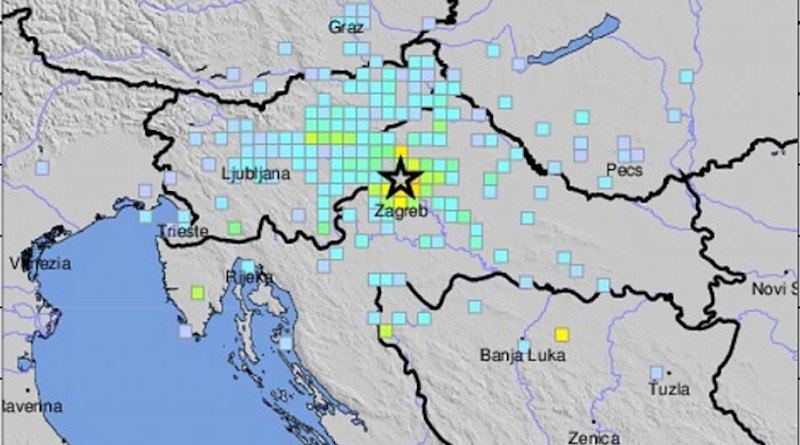 An earthquake of at least 5.3 magnitude struck Croatia close to the capital Zagreb early on Sunday, damaging buildings and injuring dozens of people, officials said.

A powerful earthquake hit Croatia at 6.24am local time on Sunday morning with the epicentre seven kilometres north of Zagreb, said the European-Mediterranean Seismological Centre, EMSC.

Another strong earthquake shook Zagreb at 7am, with both tremors causing widespread damage and panic amid the ongoing coronavirus crisis.

Local media reported that dozens were injured and that a 15-year-old suffered life-threatening injuries.

Damage to buildings was visible in the centre of the city, and some people fled their homes. In the panic, some forgot about maintaining social distancing.

The EMSC said the earthquake’s magnitude was 5.3 on the Richter scale, but Croatian Prime Minister said it was 5.5.

The head of Zagreb’s Office for Emergency Management, Pavle Kalinic, called on the public to remain outside after the earthquake and stressed that Civil Protection officials would look after them.

An Associated Press report said many buildings in Zagreb suffered cracking, and walls and rooftops were damaged. Downtown streets were littered with debris, while concrete slabs fell on cars and chimneys toppled.

The top of Zagreb’s cathedral was damaged, and there were electricity and water cuts in some residential areas in the centre.

Prime Minister Plenkovic told a press conference said that it was the strongest earthquake to hit Zagreb since 1880.

“We are urging all citizens to be extra careful. We are recommending staying outside for now. No need for panic… and maintain the distance recommended because of the coronavirus epidemic,” Plenkovic said.

“We have two crisis situations which contradict each other. The message was to stay at home,” he added.

Interior Minister Davor Bozinovic also urged the public to maintain social distancing, saying that the coronavirus outbreak is more challenging for the authorities than dealing with the consequences of the earthquake.

The earthquake hit Croatia amid a partial lockdown in the capital imposed last week to fight the spread of the coronavirus.

Anti-epidemic measures introduced last week banned all public events, gatherings of more than five people in one place, and suspended all retail and trading activities.