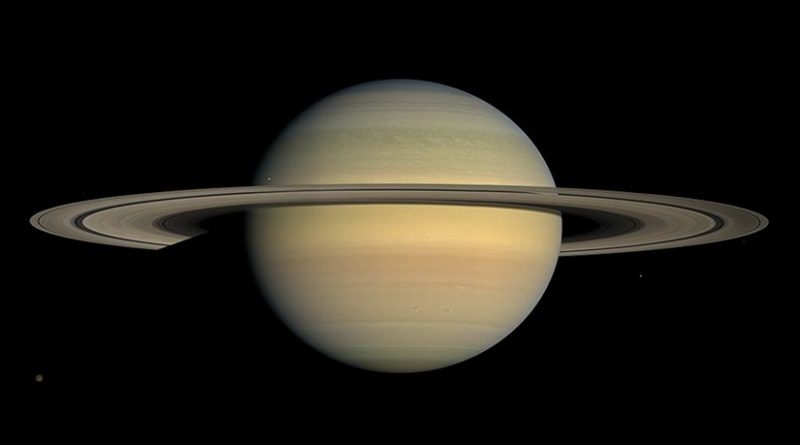 Saturn has 53 named moons, one of which has just been shown to have all the necessary ingredients to support life. New observations by the Cassini space probe reveal that plumes of vapor escaping from the planet’s icy shell contain chemicals that, back on Earth, are associated with life.

Scientists have long thought Enceladus could be one of the best spots to look for life-supporting conditions: its entire sub-surface is covered by ocean. But now the readings Cassini has sent back to NASA, as it flew though the vapour plume, show that below the moon’s −198 °C (−324 °F) icy surface, lies water rich with molecular hydrogen.

Speaking on Radio Four’s ‘Today Programme’ Dr Linda Spilker, the Cassini Project Scientist at the Jet Propulsion Laboratory in Pasadena, said, “The hydrogen is coming from a hydrothermal vent on the sea floor of Enceladus.”

She called the finding very significant as the hydrogen could be a potential source of chemical energy for any microbes that might be in the moon’s ocean.

Dr Mary A. Voytek, head of NASA’s Astrobiolgy programme, added “Certainly this finding suggests there is a significant amount of hydrothermal activity to produce such a strong signal of hydrogen and this hydrogen is a good source of chemical energy to support life.”

On Earth, hydrogen escaping from the ocean bed through hydrothermal vents can sustain ecosytems that feed off the gas. They then produce methane – which has also been found coming from Enceladus. Along with molecular hydrogen, the data sent back from the probe reveals the presence of large amounts of carbon dioxide. This is the other ingredient that is critical for the process of methanogenisis, the reaction that supports microbial life in undersea environments on Earth.

Whereas water and organic molecules had been detected on Enceladus, the final, vital piece of the jigsaw has now been confirmed: the fuel source necessary for sustaining life.

So what comes next? The team at NASA are keen to take a closer look, “We don’t understand what the structures would be and there maybe no way for us to tell remotely, until we actually get into these oceans,” said Dr Voytek.

Home » One Of Saturn’s Moons Could Support Life