Hamid Karzai is a master survivor of Afghan politics. He has been at the helm of Afghan affairs for more than a decade now. His stints, first as chairman of the interim and transitional administrations, and thereafter as two time elected president, is a distinction of sorts in the tumultuous politics of Afghanistan. Since the overthrow of the monarchy in 1973, Karzai is probably the only Afghan head of state, and that too an elected one, to have survived so long in a country dominated by battle-hardened commanders and militia running into hundreds. Except for a brief stint as a deputy minister in the first mujahideen government in 1992, he did not have much to show by way of political experience in national politics at the time of his appointment as chairman of the post-Taliban interim administration in December 2001. Though his father was the deputy speaker of the first Afghan Parliament in the 1960s, Karzai was more or less a political newcomer. 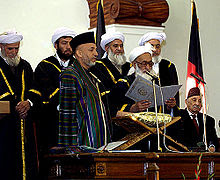 With virtually no mass support base, Karzai’s decade long political sojourn is a testimony to his craftsmanship and ability to play through the complex web of old and evolving power politics. Once derided as ‘mayor of Kabul’, he has often shown the tact of a master strategist in dealing with challenges to his authority. Individually, and in a strict political sense, he is neither a regional nor a national leader within Afghanistan. His support base, if he has any, is least defined in the political maze that is Afghanistan. Perhaps, his biggest asset is his undefined support base, politically and socially.

He has successfully partnered and at the same time weakened his opponents from the north by playing upon the political divide among them. He has thus far thwarted all attempts by non-Pashtun factions to put up a united political opposition to his authority. He has dabbled in the tribal politics of Pashtun south, and has co-opted ‘former’ Taliban elements into local administrative structures and in his High Peace Council. However, he has failed to complement his success in keeping the northern leadership divided by building support among his co-ethnics in the south and east. The killing of his brother, who was heading the Kandahar provincial council, and rising Taliban influence, have substantially weakened his position in the Pashtun heartland. He may have had several limitations to his authority, but today he definitely appears far more independent of his external sponsors compared to his most fearsome of opponents, be it the Taliban or the Haqqanis.

Once favoured in the West, Karzai has of late been a subject of intense criticism and jest. Despite near consistent attack on his credibility as a leader both from his supposed allies and enemies, he has emerged from crisis to crisis, neither gaining nor losing much in terms of his unique position in Afghan politics. A lot has been said about the flip sides of his personality, including his style of functioning or non-functioning, yet he remains the crucial link to Western engagement in Afghanistan.

President Karzai recently made three political moves that cannot simply be dismissed as mere gimmicks. They have been carefully timed with the ongoing security transition process, and are significant from the point of view of public posturing in the run up to 2014. First, he recently extracted memorandums of understanding on two very contentious issues with the US—one on the transfer of prisons from US control to the Afghan government; and the other, on greater government oversight and authority over night raids by the Western forces. US military commanders have been reluctant to make any concession on the above issues as they were considered critical to the US military engagement in Afghanistan. These finally paved the way for the signing of the much-awaited strategic partnership agreement between the two countries in May.

Secondly, Karzai appointed Salahuddin Rabbani as the new chairman of the government-appointed High Peace Council, which is responsible for seeking political reconciliation with the Taliban. The post had been lying vacant for almost six months since its first chairman, Burhanuddin Rabbani, was killed in September 2011. The appointment of Burhanuddin’s son Salahuddin Rabbani as his successor was a well thought out move by Karzai. The idea was not only to revive the High Peace Council in view of the US making its own moves on the issue of reconciliation with the Taliban leadership, but also to ensure that the most powerful Tajik faction too continues to have stakes in the Kabul-led initiative.

Thirdly, he has proposed that the security transition process from Western to the Afghan forces, as well as the next presidential election, could be completed in 2013, a year ahead of the 2014 deadline. The idea probably is not as much about reducing Kabul’s dependence on the West as it is about preserving the current political system after 2014, as well as strengthening the position of Kabul by way of greater control over international aid and the prolonged Western presence in Afghanistan. But what exactly Karzai stands to gain by all this in terms of his own political future? And, what if elections are not at all held in 2014 or even beyond?

Karzai may have stated that he will not run for another term as president, but at the same time he has not spelt out his future plans. Not many within Afghanistan seem to be willing to take his statement at face value. So, is Karzai positioning himself for 2014 by making the above political moves? It is not clear as to what kind of political transition it would be in 2014-15, or what kind of political arrangement would emerge in case elections do not take place or results are rejected en masse. Whether the current government would continue pending elections or a caretaker/transitional government would be formed, or a new coalition comprising of certain factions would emerge. The worst case scenario would be a full scale civil strife with no single authority in Kabul. Karzai’s re-election is incumbent on a revision of constitutional provisions pertaining to presidential candidature. Such a move may actually lead to a constitutional crisis. Interestingly, Karzai does not seem to be grooming anyone as his successor from among his core group of confidantes either.

Like a seasoned politician, Karzai knows how to play different tunes to different audiences. He could be supporting the most conservative of laws in his country, and yet could be endearing to the international community with his universalistic and liberal ideas. He can go ballistic about his Western partners and yet be admiring them for their generous assistance. He once even threatened to resign on the issue of diluting presidential powers, and on occasion has even talked of joining ranks with the Taliban. Every time pressure was brought upon him, he has been able to put his opponents on the defensive.

All calculated efforts to prop up political alternatives to Karzai have thus far failed. But then what when his second and final presidential term, as per the Afghan Constitution, comes to an end in 2014? What does it mean to his political career, his role and position thereafter? Karzai is very much a part, rather a key protagonist, of the unfolding politics in the run up to whatever happens in 2014 and beyond. He has been relatively assertive and notably obstinate on certain issues pertaining to the strategic partnership agreement with the United States. Though it may not have helped much in terms of shoring up his position at the domestic level, it certainly strengthens his constitutional authority and control over Afghanistan’s international affairs.

Unless something unexpected happens, Karzai is least likely to politically fade away on his own. He is not likely to share former president Najibullah’s fate either. Perhaps, the political instability after 2014 may throw up a completely new situation and opportunities before him. A failed political transition in 2014, the absence of a nationally acceptable leadership or lack of consensus on the next line of leadership, may pave way for Karzai’s continuation at least as a figure head. In times of back door diplomacy and brokerage of deals, his political skill and experience in balancing the divergent interests of various stakeholders may assure him a role in fashioning the new political arrangement. Though Karzai might be having plans up his sleeves, he too however could be in for big surprises.

Originally published by Institute for Defence Studies and Analyses (www.idsa.in) at http://www.idsa.in/idsacomments/WillKarzaiSurvive2014_vchandra_220512