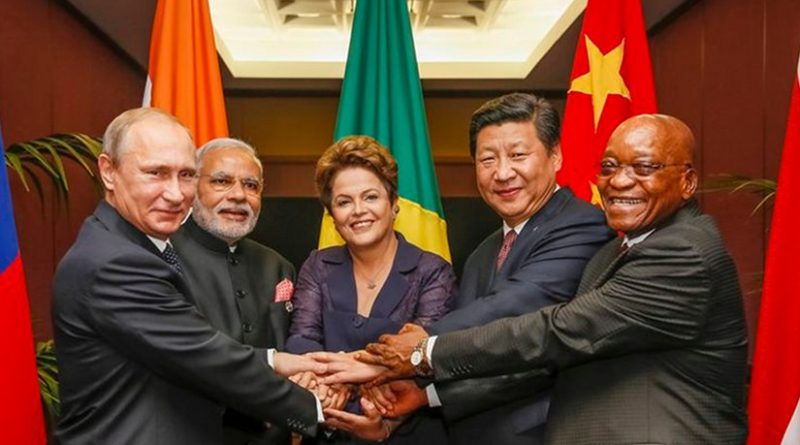 Talk about American hegemony. In a precious few years, the US has managed pretty well in fending off a major international challenge to its global hegemony posed in the form of a coalition of “emerging economies” known as BRICS, boldly contemplating reforming the western-dominated financial institutions, alternatives to US dollar, restructuring the world economy, and the like, like a sweet dream punctured by the ensuing counterpunch of a rude awakening.

The group — Brazil, Russia, India, China, and South Africa — was never a homogeneous entity to begin with and has been riddled from the start with cross-cutting preferences and loyalties, e.g., notice India’s nuclear-sharing agreement with the US that effectively brought India to the US camp for all practical purposes, and now India is scheduled to host the BRICS’s next summit in October, 2016, but the big question is, really, to what end?

This is a hard question for the BRICS countries to ponder between now and the next summit, time to reflect on the group’s history and development since the first summit in Yekateringburg in June, 2009. A lot of ambitious paper rhetoric complementing a new development bank as a starter, but the net result may have been disproportionately negative for all concerned, given the feat of US fury meeting the BRICS challenge, resulting in severe blows to Russia and Brazil, effectively punishing them for daring to fathom a multipolar world order unhinged from the fetters of western domination.

How did the US manage these counterblows, so quickly and so effectively? By playing down and dirty of course, putting its colossal soft and hard power to work to unravel the BRICS daydream. First it was the Ukraine coup that targeted Russia’s vital access to Crimea, forcing Putin’s hands, followed by tough western sanctions, while demonizing him as the bad guy, followed by an outright oil conspiracy with the Saudis glutting the oil market and thus delivering a devastating blow to the oil-dependent Russian economy, then targeting Russia’s Mediterranean base in Syria by playing the radical jihadist card through local proxies, and finally managing a wholly unholy regime change in Brazil, by co-conspiring with the pro-American puppets in dethroning a popularly-elected president with the lamest excuses. As a result, Brazil today is for all practical purposes fully back in the US orbit, its BRICS dream thrown to dustbin of history.

Henceforth, the bold architects of BRICS might be pondering, where did we go wrong? On Russia’s part, which has been in a certain sense under western siege since 1918 without any interruption, this question requires a good deal of soul searching. If Russia had any hope of driving a wedge between US and Europe, as part of its BRICS strategy, that has proved unworkable as well, particularly since the US-Turkey script of flooding Europe with the Muslim refugees, infiltrated by the jihadists, thus making Europe ever so more vulnerable and security-dependent on the US. NATO today is therefore led by the US with an iron fist, bereft of any democracy within. Such is the hard reality that Mr. Putin and his advisers in the Kremlin face, while gripped with a declining economy. For sure, Russia is still a major military power, which is one main reason why it is targeted by the NATO alliance, but the question is how long can it compete militarily, when it is also stretched thin by gambits such as in Syria or Ukraine, while domestic economy is hurting and the popular discontent bound to grow over time, unless some drastic policy revisions are instituted?

No doubt the battles for hegemony and counter-hegemony will be on-going and the BRICS can still muster some feeble punches, e.g., in the realm of information technology, but with Brazil just knocked out of the system through a most unpleasant and unlawful spectacle of parliamentary coup, the chips are piled pretty high against BRICS today.

Home » Is The BRICS Dream Over? – OpEd

2 thoughts on “Is The BRICS Dream Over? – OpEd”