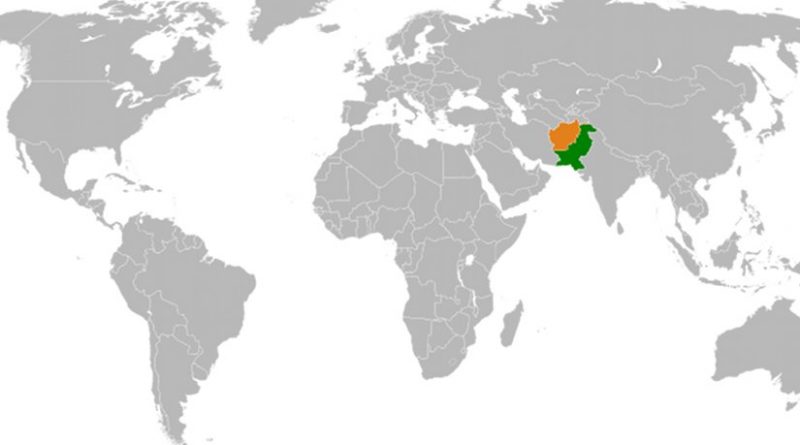 Two Frontier Constabulary (FCB) soldiers were injured in cross-border firing in the Kurram Agency of Federally Administered Tribal Areas (FATA) of Pakistan, from the Khost Province of Afghanistan on May 12, 2017. The attack took place as FCB personnel were undertaking construction of a wall along the border on the Pakistani side.

This is the second cross-border attack coming from Afghanistan over the past week. At least 12 persons — 10 civilians and one sepoy each from the Pakistan Army and the Frontier Corps (FC) — lost their lives and around 40 others were injured in firing and shelling by Afghan forces in Kali Luqman and Kali Jahangir areas of Chaman in Qilla Abdullah District of Balochistan on May 5, 2017, while Pakistani officials were carrying out a census in the area. An Inter-Services Public Relations (ISPR) press release tweeted by its Director General (DG) Major General Asif stated, “Afghan border police opened fire on FC troops detailed for security of census in a village along Chaman border… Since 30th April, Afghan Border Police had been creating hurdles in conduct of census in divided villages of Killi Luqman and Killi Jahangir in Charnan area on Pakistani side of the border. This was done despite the fact that Afghan authorities had been informed well in advance and coordination was carried out through diplomatic and military channels for conduct of census.”

An Afghan official, Zia Durrani, talking to journalists in Afghanistan, alleged that Pakistan was, on the pretext of census, undertaking “malicious activities and was provoking villagers against the (Afghan) Government”.

Later in the day, an exchange of fire was reported at two check posts at Torkham Border crossing between Pakistan and Afghan armed forces in the Khyber Agency of FATA. According to the details shared by officials, Afghan forces kept firing at Iqbal Post and Post II at Torkham Border for at least an hour. Pakistan also retaliated to the firing. Meanwhile, the political administration imposed a curfew in the area suspending NATO supplies and Afghan Transit Trade activities.

In a face-saving measure on May 7, 2017, the Pakistan Army claimed that it had killed more than 50 Afghan soldiers in a clash on the Chaman border crossing in the Qilla Abdullah District of Balochistan on May 5. Frontier Corps (FC) Major General Nadeem Ahmed stated, “We are not pleased to tell you that five Afghan check posts were completely destroyed more than 50 of their soldiers were killed and over 100 were wounded… We are not happy for their losses but we were forced to retaliate.” However, Afghanistan quickly denied the claim. Sediq Sediqqi, an Afghan Government spokesman tweeted, “Very false claims by Pakistani Frontier Corps that as many as 50 Afghan soldiers lost their lives in Pak (Pakistan) retaliation totally rejected.” Afghanistan Ambassador to Pakistan Omar Zakhilwal further stated that only two Afghan soldiers were slain and seven others injured.

In the aftermath of the firing, the Pakistan Government closed down all the Pak-Afghan border-crossings for an indefinite period. Earlier, Pakistan had closed its borders with Afghanistan at Chaman and Torkham on February 18, 2017, following the suicide attack on the Lal Shahbaz Qalandar shrine in Sehwan and a series of terrorist attacks across the country, blaming Afghanistan-based Pakistani terrorists for the attacks. On March 7, 2017, Pakistan temporarily opened its border crossings with Afghanistan at Torkham and Chaman.

After a month of closure, Prime Minister Nawaz Sharif ordered the reopening of the border on March 20, 2017. The Prime Minister declared that links of recent terror attacks had been traced back to Afghanistan, “but Pakistan is reopening the border as a goodwill gesture.”

The recent skirmish along the border started on June 12, 2016, over the construction of ‘Pakistan Gate’ at the Torkham border crossing. Both sides resorted to cross-border firing, blaming each other for initiating the clash. The construction of the gate appeared to have angered the Afghan Government. Tension prevailed as both sides traded small arms and mortar fire across the border for three days. By the time a ceasefire was agreed to by Pakistan and Afghanistan on June 15, four soldiers (including one Afghan border police officer and a Pakistan Frontier Corp’s Major Ali Jawad Changezi) had been killed and at least 40 injured. The Torkham border reopened on June 18, after five days of closure.

The under-construction border gate, including a trench and walls, has been a major bone of contention between the neighbouring countries. Afghanistan contends that the installation of a physical barrier would make this border permanent, while Pakistan had announced, for the first time in September 2005, that it had plans to build a 2,400-kilometre fence along its border with Afghanistan to check armed militants and drug smugglers moving between the two countries. The conflict over the legitimacy of the Durand Line between Pakistan and Afghanistan is more than a century old. The Durand Line, named after British diplomat Mortimer Durand, was drawn in 1893 as the international border between British India and Afghanistan in an agreement with Afghan ruler Abdur Rahman Khan. No Afghan Government has accepted the border since the creation of Pakistan in 1947, on the ground that the agreement with the British lapsed after their withdrawal from their Indian empire, and because it divides the Pashtun ethnic homeland and tribal communities living both side of the border. These tribal populations are accustomed to moving back and forth freely and in some cases own land on both sides of the border.

Pakistani plans for mining and fencing the border were renewed on December 26, 2006, but were again opposed by the Afghan Government and the South Waziristan Agency of FATA saw a border skirmish in April 2007. Pakistani SFs operating in South Waziristan made a three-tier security deployment on April 11, 2007, to stop cross-border infiltration by militants into Afghanistan. Pakistan fenced 12-kilometers of its border stretch with Afghanistan to ‘choke off’ cross-border infiltration, but Afghan troops tore down the fence on April 19, leading to a gun-battle, though there were no casualties.

Despite Afghanistan’s opposition Pakistan later started excavation work on a several-hundred-kilometer-long trench along the Balochistan border in April 2013. After about three years of constant efforts, a 1,100 kilometer trench in Balochistan along the Afghan border was completed on June 20, 2016. The 11-foot-deep and 14-foot-wide ditch on the entire stretch of the border was done under the supervision of FC at a cost of PKR 14 billion.

Since the December 16, 2014, terrorist attack on Peshawar’s Army Public School, Pakistani authorities, who claim that the terrorists entered Pakistan through Torkham, have sought to further regulate the movement of people and goods through the border. The movement across the Afghan-Pakistan border also generates revenue for both Afghanistan and Pakistan. The two countries exchange goods and services worth some USD 3 billion annually across the Durand Line, in addition to a large volume of illegal trade and smuggling.

Pakistan’s move to close the border crossings every time there is a rise in tensions has failed to resolve the problem of the border conflict, and to stop terrorist movements on both sides. Crucially, such moves are futile because terrorists and other illegal actors don’t use the official crossings. Terrorists with sanctuaries on either side of the border often use one of many other unofficial passes and crossings along the over 2,400-kilometer frontier. Wahid Muzhdah, a Kabul-based analyst noted, on March 7, 2017, “There are over 20 unofficial crossings along the Afghan-Pak border which militants use to move between the two countries… I believe the initial goal of closing the border from the Pakistani side is to put economic pressure on Afghanistan.” But the border closure has dented business on both sides. Khan Jan Alokozay, vice chairman of Afghanistan’s Chamber of Commerce and Industry (ACCI) observed, “Afghan and Pakistani businessmen are losing USD 4 million on average each day.”

Nevertheless, on April 1, 2016, Pakistan and Afghanistan agreed on regulations that would require Afghan citizens to present valid and authorized travel documents prior to entering Pakistan via Torkham. On April 2, an apex committee which included Pakistan’s Army Chief Raheel Sharif, called for the enforcement of the border crossing mechanism “in true letter and spirit,” at all crossing points, especially Torkham. On April 8, Pakistan issued a notification asking all Afghan nationals residing in Torkham to vacate the area. Over 300 Afghan families were evicted from the border town the following week. Tensions mounted as Pakistani authorities demolished houses of Afghan nationals in Torkham. By April 18, over 300 such houses had been razed to the ground. Then on May 11, in the face of Afghanistan’s continued objections to Pakistan’s construction of a barbed wire fence at Torkham, Pakistan closed the border. The tension peaked on June 12 over the ‘Pakistan Gate’ issue.

Since then, an undercurrent of tension persists along all border crossings. On August 18, 2016, a group of Afghan demonstrators attacked the Friendship Gate at Chaman and set the Pakistani flag on fire. A large number of Afghan nationals, celebrating the 97th anniversary of their country’s Independence Day, gathered near the Friendship Gate after marching through the streets of Spin Boldak town across the border. They carried placards and banners inscribed with anti-Pakistan slogans and started pelting the Friendship Gate with stones, smashing windowpanes of buildings.

While border clashes between Afghanistan and Pakistan are not a new occurrence, the situation in the past few months has been more warlike than usual. Both countries accuse each other of providing jihadists with safe zones to launch attacks across the border. On May 18, 2017, the Pakistan Army claimed that it has satellite images and ground reports that proved Afghanistan’s “involvement” in cross-border terrorist acts and infiltration of terrorists from Afghan areas into Pakistan. Lieutenant Colonel Haroon of the Pakistan Army asserted, “Satellite images show that the Afghan border area of Parchow in Nangarhar province had been utilised by the Tehreek-e-Taliban Pakistan (TTP), Khalid Sajna and Daesh groups to train militants.” Stressing the need for effective border management for ensuring peace in Pakistan, he added, against the evidence of decades of Pakistani mischief, “We will never allow Pakistani soil to be utilised for destabilizing Afghanistan.”

Unsurprisingly, on April 13, 2017, the US confirmed that the terrorist safe havens were quite safe in Pakistan, allowing terrorist groups to carry our strikes across the border. US State Department acting spokesperson Mark Toner noted, “We’ve been very clear, while we understand that Pakistan has made efforts to confront terrorism and terrorist organizations on its own soil, that there are still what we call safe havens that exist for terrorist groups to operate from and carry strikes out on Afghanistan.”

It is not just Afghanistan and the US Coalition there that have a problem with Pakistan’s sponsorship of terrorism. Islamabad’s role in fomenting terrorism in India is well known. However, on May 8, 2017, Iranian Army Chief Major General Mohammad Baqeri also warned Islamabad that Tehran would hit bases inside Pakistan if Islamabad did not confront terrorists who carry out cross-border attacks. General Baqeri declared, “We cannot accept the continuation of this situation… We expect the Pakistani officials to control the borders, arrest the terrorists and shut down their bases. If the terrorist attacks continue, we will hit their safe havens and cells, wherever they are.”

Pakistan continues to use terrorism as an instrument of state policy, and at the same time seeks to legitimize contentious borders by building barriers on the pretext of stopping ‘cross border infiltration’ by terrorists. There can be no peace in the Pakistani neighbourhood and, indeed, within Pakistan, as long as this continues.