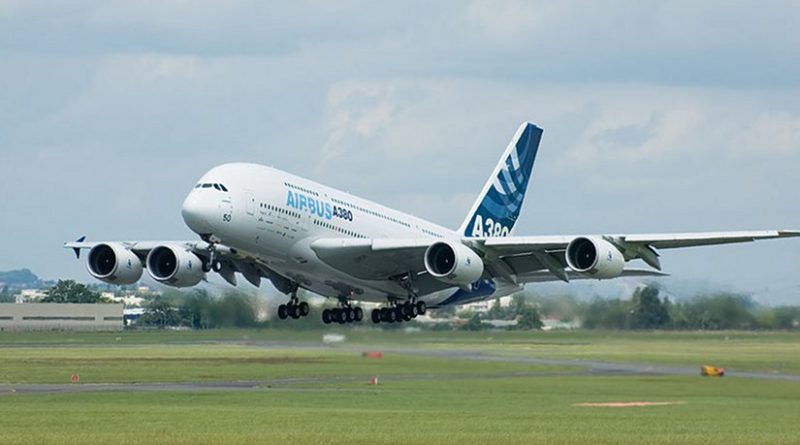 Airbus A380, the largest passenger jet in the world. Photo by Dmitry A. Mottl, Wikipedia Commons.

(EurActiv) — European planemaker Airbus wants to stay in the UK whatever the outcome of Brexit, as the country is “a very important pillar” for the company, new CEO Guillaume Faury said on Tuesday (21 May), amending negative comments made by his predecessor.

Airbus, seen as the poster child of industrial integration in creating European champions, also wants to be  “more Asian” to be closer to its fastest-growing markets.

Faury spoke with journalists invited to the innovation days at the company’s Toulouse headquarters. EURACTIV was part of the attendees.

In one of his first major media appearances since taking over in April, Faury stressed that the UK is “a very important pillar” for Airbus.

For that reason, he said, “we want to stay in the UK”, regardless of the Brexit outcome and the future long-term relation between London and the EU, as he highlighted the high-skilled workforce and its research facilities in the UK.

“UK is part of Airbus and Airbus is part of the UK… and we would like to preserve that,” he said.

His predecessor, Tom Enders, warned in January that Airbus could take “very harmful decisions” for the UK as a result of a disorderly divorce.

The company has prepared for potential border disruptions triggered by a no-deal Brexit and may step up its efforts ahead of the 31 October deadline for the UK to leave.

But the company also wants to reposition itself worldwide.

Airbus has become a buzzword in the debate to create European champions, supported by a revision of the EU’s competition rules. Especially if the arguments to limit the European Commission’s antitrust powers come from France or Germany.

But the European planemaker seems to have its heart elsewhere. Airbus is a “symbol” of pan-European industrial integration, its chief commercial officer, Christian Scherer, told reporters.

But he added that the company, which is celebrating its 50th anniversary, is not French or American but “a true worldwide player”, in a reference to its chief competitor, US-based Boeing.

Airbus sees itself “far more advanced” than its rivals in its pursuit to become a global firm. But it still wants bigger roots in Asia.

We would like to be “closely correlated in value creation where the customers are”, Scherer said.

Out of the 37,000 airplanes to be acquired by airline companies this year, almost half of them will go to Asia. As a result, “we need to become a little bit more Asian”, he said.

China is a key part of this strategy. Last March, Airbus reached a landmark deal with Beijing to sell 300 aircraft. In addition, it has a research centre and assembly line in the city of Shenzhen.

“We are becoming a true Chinese player,” Faury explained.

While Airbus is looking east, some including French economic minister Bruno Le Maire have mentioned that the crown jewel of Europe’s airspace industry has become an example in the process of creating European champions.

However, EU competition Commissioner Margrethe Vestager dismissed this argument when she blocked the merger of train-makers Alstom and Siemens in February.

In the case of Airbus, the merger was “a good example of creating competition,” she explained back then. The market was dominated by Boeing and the European players were too small to compete with the US manufacturer.

However, the Siemens-Alstom tie-up would have “limited” competition, as the number of players would have decreased, damaging innovation and increasing prices.

Former CEO Tom Enders criticised the Commission’s decision in April. In an op-ed he wrote before leaving his post, he said the rejection of the merger “gives cause for concern.”

Faury said on Tuesday that he was “in favour of creating European champions”, as the history of the company proved.

But he came close to disregarding the type of government intervention advocated by Paris and Berlin to create them.

Responding to questions about global markets, he said that the company believed “in a level playing field for competition”, as it is important for investments.

The plans to grow on the back of China’s buoyant market could be endangered if the trade war between the US and China escalates.

As more than 10% of Airbus supplies come from US providers, the company could require an authorisation of US Treasury to export to China if the situation worsens.

However, inside the company, such a ban is not yet being considered.

The Airbus chief said that the company is growing at a “slightly slower pace” but so far it is “not too much impacted” by the trade disruptions. But he warned that “a trade war won’t make any winners”.

Safety, a top issue for plane makers, has become an even greater priority for the sector following the two crashes of Boeing’s 737 Max aircraft.

But the safety crisis suffered by its longtime rival did not bring new opportunities to Airbus. “It is not a posture, it’s real”, Faury admitted. He was certain that regulators would come up with new recommendations as it happens every time there is a major accident.

“Let regulators and investigative bodies do their work”, he said.

Airbus’s chief operating officer, Michael Schoellhorn, said that regulators, including the European Aviation Safety Agency (EASA) and the US’ Federal Aviation Administration (FAA), may become stricter when it comes to the scrutiny of changes to airplane design.

The discrepancies between the FAA and EASA over the Boeing 737 MAX crisis could have consequences for the aviation sector in terms of certification approvals and other procedures.

In this regard, Faury stressed the importance of the cooperation between the two authorities for the sector.

Besides safety, sustainability has become another top priority for plane-makers.

In order to reduce CO2 emissions, European parties and some countries, like the Netherlands, are proposing a tax on kerosene.

“We don’t think it is a good idea”, said Faury, because “it would be a mistake to add taxes on taxes”.

The aviation sector is already included in the EU’s emission trading system. But for some, this is not enough given the expected growth of gases.

By next year, global international aviation emissions are projected to be around 70% higher than in 2005.

Airbus cited progress made in decarbonising air travel with the new aircraft models, by significantly improving the fuel efficiency of the engines.

Instead of passing new taxes, Faury proposed investing in technology, biofuels and air traffic management to improve the routes and save fuel.