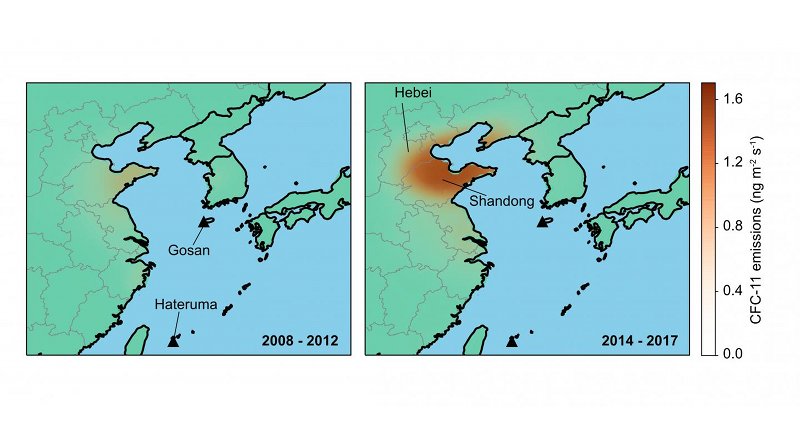 These are emissions inferred from atmospheric observations at Gosan and Hateruma monitoring stations show an increase from eastern China between the periods 2008 - 2012 (left) and 2014 - 2017 (right). The emission rise is primarily from Shandong and Hebei and surrounding provinces Credit: University of Bristol

Since 2013, annual emissions of a banned chlorofluorocarbon (CFC) have increased by around 7,000 tonnes from eastern China, according to new research published in Nature today [Wednesday 22 May 2019] by an international team of scientists from the UK, South Korea, Japan, USA, Australia and Switzerland.

Last year, it was reported that emissions of one of the most important ozone depleting substances, CFC-11, had increased. This chemical was used primarily as a foaming agent for building insulation, refrigerators and other consumer products. The surprise finding indicated that someone, somewhere was likely producing and emitting thousands of tonnes of CFC-11, despite a global phase-out since 2010 under the Montreal Protocol.

Dr Matt Rigby, a lead author of the study and Reader in Atmospheric Chemistry in the School of Chemistry at the University of Bristol, explained: “Through global monitoring networks such as the Advanced Global Atmospheric Gases Experiment (AGAGE) and the National Oceanic and Atmospheric Administration Global Monitoring Division (NOAA GMD), scientists have been making measurements of chlorofluorocarbons (CFCs) in the atmosphere for over 40 years.

“In recent decades, we’ve primarily seen declining CFC emissions reflected in these measurements, because of the Montreal Protocol. Therefore, it was unexpected when it was reported last year that, starting around 2013, global emissions of one of the most important CFCs suddenly began to grow.”

This finding was concerning because CFCs are the main culprits in depletion of the stratospheric ozone layer, which protects us from the sun’s ultra-violet radiation. Any increase in emissions of CFCs will delay the time it takes for the ozone layer, and the Antarctic ozone “hole”, to recover.

But where were these new emissions coming from? Until now, researchers only had an indication that at least part of the source was located somewhere in eastern Asia.

“Initially our monitoring stations were set up in remote locations, far from potential sources,” said Ron Prinn, co-author of the new study, leader of the AGAGE network and professor at the Massachusetts Institute of Technology (MIT). “This was because we were interested in collecting air samples that were representative of the background atmosphere, so that we could monitor global changes in concentration and determine their atmospheric lifetimes.”

To better pinpoint emissions sources, more recent measurement stations have been located closer to industrialised regions. In this case, the clue to the location of the new CFC-11 emissions came from an AGAGE station in South Korea and an AGAGE-affiliated station run by the National Institute of Environmental Studies (NIES) in Japan.

Professor Sunyoung Park from Kyungpook National University in South Korea, a lead author on the new study, who runs the South Korean Gosan measurement station, explained: “Our measurements show ‘spikes’ in pollution, when air arrives from industrialised areas. For CFC-11, we noticed that the magnitude of these spikes increased after 2012, indicating that emissions must have grown from somewhere in the region.”

Similar signals had also been noticed at the NIES station on the Japanese island of Hateruma, close to Taiwan.

To establish which countries were responsible for the growing pollution levels at these stations, an international team of modelling groups at University of Bristol, the UK Met Office, the Swiss Federal Laboratories for Materials Science and Technology (Empa) and MIT ran sophisticated computer simulations that determined the origin of the polluted air samples.

“From the Korean and Japanese data, we used our models to show that emissions of CFC-11 from eastern China had increased by around 7,000 tonnes per year after 2012, particularly in or around the provinces of Shandong and Hebei.”, said Dr Luke Western, post-doctoral researcher at the University of Bristol.

“We didn’t find evidence of increasing emissions from Japan, the Korean peninsula, or any other country to which our networks are sensitive.”

To investigate the possibility that the new emissions from China could be the result of a release to the atmosphere of CFC-11 that was produced before the ban, the team considered a range of possibilities.

Dr Rigby said: “CFC-11 was used primarily in foam blowing, so we looked at estimates of the amount of CFC-11 that could be locked up in insulating foams in buildings or refrigerators that were made before 2010, but the quantities were far too small to explain the recent rise.

“The most likely explanation is that new production has taken place, at least prior to the end of 2017, which is the period covered in our work.”

Whilst the new study has identified a substantial fraction of the global emissions rise, it is possible that smaller increases have also taken place in other countries, or even in other parts of China.

Professor Park explained: “Our measurements are sensitive only to the eastern part of China, western Japan and the Korean peninsula and the remainder of the AGAGE network sees parts of North America, Europe and southern Australia. There are large swathes of the world for which we have very little detailed information on the emissions of ozone depleting substances.”

Nevertheless, this study “represents an important and particularly policy-relevant milestone in atmospheric scientists’ ability to tell which regions are emitting ozone-depleting substances, greenhouse gases, or other chemicals, and in what quantities,” said Professor Ray Weiss, a geochemist at Scripps Institution of Oceanography at the University of California San Diego and study co-author.

Dr Rigby said: “It is now vital that we find out which industries are responsible for the new emissions. If the emissions are due to the manufacture and use of products such as foams, it is possible that we have only seen part of the total amount of CFC-11 that was produced. The remainder could be locked up in buildings and chillers and will ultimately be released to the atmosphere over the coming decades.”

Previous reports by the Environmental Investigation Agency and the New York Times have suggested that Chinese foam manufacturers were using CFC-11 after the global ban. Furthermore, Chinese authorities have recently identified and closed down some illegal production facilities.

Whilst this new study cannot determine which industry or industries are responsible, it provides a clear indication of large increases in emissions of CFC-11 from China in recent years. These increases, likely from new production, account for a substantial fraction of the concurrent global emission rise.