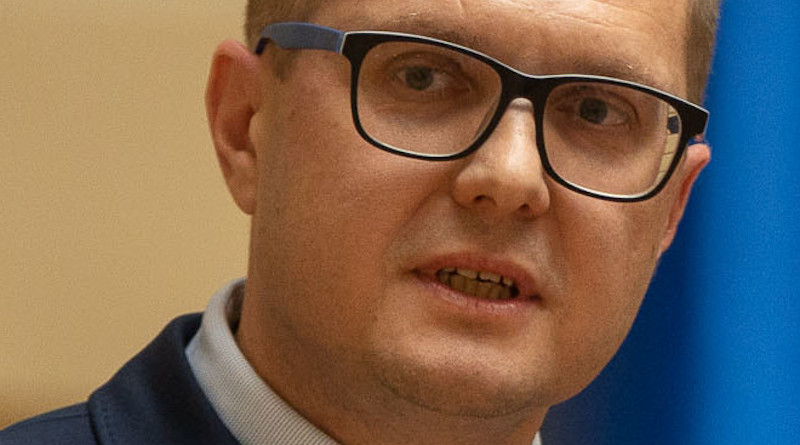 (RFE/RL) — The head of the Ukrainian Security Service (SBU), Ivan Bakanov, holds a top position in a private company registered in Spain, in violation of the anti-corruption law, according to Skhemy (Schemes), a joint project by RFE/RL and UA:Pershy television.

According to the May 21 report, an official extract from the register of legal entities in Spain shows Bakanov has occupied the post of sole administrator at Nueva Tierra Verde Sociedad Limitada since 2015.

The founder of the company is the Cypriot company Davegra LTD, owned by Andriy Yakovlev, the creator of Kvartal-95 Studio, where incumbent Ukrainian President Volodymyr Zelenskiy worked as a comedian/actor before he was elected last year.

The name of the company, based in the Spanish province of Girona, translates to New Green Territory, which echoes the titles of projects with Zelenskiy’s involvement. The president’s last name stems from the word green in Slavic languages.

According to the register, the company specializes in construction and various real-estate activities.

Since it does not submit annual reports on its operations, the company was added to a list of violators of Spanish tax regulations.

Last autumn, the company’s tax identification number was temporarily revoked due to the violation.

The State Register of Legal Entities of the Province of Girona confirmed to Skhemy that the company had not been liquidated and was considered a functioning entity.

Under Spanish regulations, Bakanov is legally the company’s sole manager and fully in charge of running it.

Article 25 of Ukraine’s Law on the Prevention of Corruption states that individuals occupying public offices are banned “from being members of boards, other executive or control bodies, and supervisory boards of commercial enterprises or profit organizations.”

Bakanov refused to comment on the situation, but the SBU press service provided Skhemy with a statement denying Bakanov did anything wrong.

“It is a well-known fact that long before his appointment as the chief of the Security Service of Ukraine, Ivan Bakanov was successfully engaged in business, including business activities abroad. We stress that, in compliance with the law requirements, he has not been engaged in commercial activities since his appointment to the public office. Nueva Tierra Verde Sociedad Limitada has officially suspended its activities in 2019, which is reflected in the relevant register of legal entities,” the SBU’s statement said.

When asked about the Spanish State Register’s statement confirming the company was still listed as functioning with Bakanov as its sole administrator, the press service said that “the work to clarify the issue will be done.”

The deadline for submitting property and income declarations by Ukrainian officials to the National Agency for the Prevention of Corruption is June 1.

According to amendments to the legislation introduced last fall, the SBU leadership must make all income declarations public.

However, Zelenskiy submitted an “urgent” bill to parliament in March that would again classify the SBU leadership’s income and property declarations.

Zelenskiy promised to discuss the issue with Bakanov, whom he calls “the most honest SBU chief,” when asked about the move during a press conference on May 20.