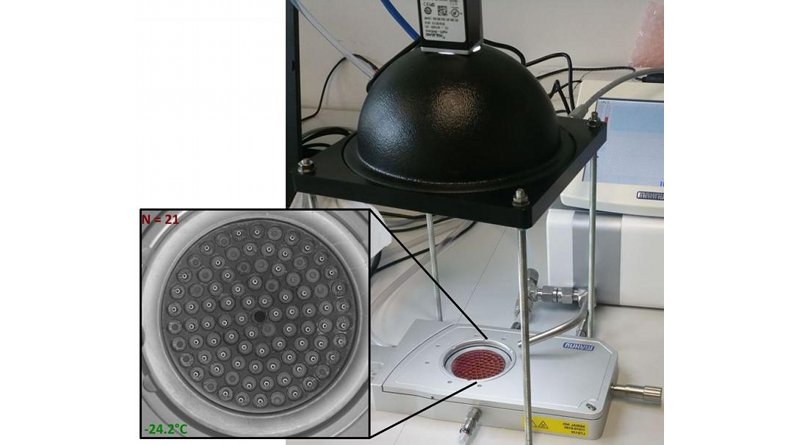 LINA (Leipzig Ice Nucleation Array) is a instrument in which the many drops of water are cooled in a controlled manner. Through a glass window it can be observed from above at which temperature how many drops freeze. The number of frozen drops is then converted into the concentration of ice nucleating particles. Credit: Photo: Heike Wex, TROPOS

For the first time, an international research team led by the Leibniz Institute for Tropospheric Research (TROPOS) has investigated atmospheric ice nucleating particles (INPs) in ice cores, which can provide insights on the type of cloud cover in the Arctic over the last 500 years. These INPs play an important role in the formation of ice in clouds and thus have a major influence on the climate. So far, however, there are only a few measurements that date back only a few decades. The new method could help to obtain information about historical clouds from climate archives and thus close large gaps in knowledge in climate research.

The team from TROPOS, the University of Copenhagen, the University of Bern and the Paul Scherrer Institute writes in the journal Geophysical Research Letters that findings on variations in the concentrations of ice nucleating particles in the atmosphere over the past centuries would help to better understand future climate changes.

Climate archives are important for reconstructing the past climate and making statements about the development of the climate in the future. In Europe, the weather has only been observed and recorded regularly for around 300 years. For the time before and for locations without a weather station, however, research depends on conclusions from natural archives. Paleoclimate research uses a wide variety of natural archives such as tree rings, ice cores or sediments. In recent decades, a number of methods have been developed and refined that use indirect indicators (climate proxies) to draw conclusions about climate factors such as temperature, precipitation, volcanic eruptions and solar activity. Clouds are responsible for precipitation, among other things, but they are very elusive and therefore difficult to study. But the number, type and extent of clouds and their ice content have a big influence on the radiation budget of the atmosphere, the temperature on the ground and precipitation, and information about parameters affecting clouds are hence important for climate reconstruction.

A method how to improve our knowledge about clouds and their role in climate history is now presented by an international research team from Germany, Denmark and Switzerland. According to them, the team has reconstructed the concentrations of ice nucleating particles (INP) from ice cores for the first time. These measurements could be used to reconstruct cloud cover in the future.

“Ice formation in mixed-phase clouds is mainly caused by heterogeneous ice formation, i.e. INP are necessary to stimulate the freezing of supercooled cloud droplets. The number and type of these particles therefore influence precipitation, lifetime and radiation properties of the clouds. In the laboratory, we were able to show that two types of particles are particularly suitable for this purpose: Mineral dust from the soil as well as various biological particles such as bacteria, fungal spores or pollen,” explains Dr. Frank Stratmann, head of the clouds working group at TROPOS.

Ice cores are often used to reconstruct various climate parameters such as temperature, precipitation or volcanic eruptions over thousands of years. For the now published study, the team was able to draw on parts of two ice cores from the Arctic: The core “Lomo09” was drilled on the Lomonosovfonna glacier on Svalbard at an altitude of 1200 metres in 2009. The ice core “EUROCORE” was elaborately extracted in 1989 from the summit of the Greenland Ice Sheet at an altitude of over 3000 metres. The frozen samples of these cores were sent to Leipzig, where they were now examined for INP. Small samples of the ice were melted and the melt water divided into many small drops of 1 and 50 microliters. These drops were placed in two experimental setups, each with almost 100 tiny troughs, and were then cooled down in a controlled manner. These setups were already used in previous studies: Both, LINA (Leipzig Ice Nucleation Array) and INDA (Ice Nucleation Droplet Array), are instruments in which the many drops of water are cooled in a controlled manner. Through a glass window it can be observed from above at which temperature how many drops freeze. The number of frozen drops is then converted into the concentration of ice nucleating particles. “In 2015 US-American researchers derived atmospheric INP concentrations from snow and precipitation water. What works for precipitation should also work for ice samples was our approach. And so we were the first to show that historical ice nuclei concentrations can also be extracted from the ice cores,” says Markus Hartmann of TROPOS, who carried out the investigations as part of his doctoral thesis.

This opens up new possibilities for paleoclimate research. Since the 1930s, countless ice cores have been extracted from glaciers all over the world and the climate of the past has been reconstructed. The Information on the cloud phase (i.e. if it contains ice or and or liquid water) was not available. The study by polar and atmospheric researchers is a first step in this direction. Since the team did not have a continuous ice core available, it could only reconstruct the ice nucleating particles from individual years of the period 1735 to 1989 on Greenland and 1480 to 1949 on Svalbard. Overall, there was no trend in the ice nucleating particles over the last half millennium. “However, the Arctic has only been warming dramatically for about 25 years. The ice analyzed now was formed before this strong warming began. Both measurements of a continuous ice core and of newer ice would therefore be desirable,” adds Markus Hartmann.

The fact that mankind has caused global warming through its emissions is undisputed among researchers. However, it is unclear how much the clouds in the atmosphere have been changed as a result. Researchers therefore also hope to gain important insights from investigations into ice nucleating particles in the air. In autumn/winter 2016, a team from the University of Beijing, TROPOS, the University of Gothenburg and the Chinese Academy of Sciences measured the concentrations of ice nucleating particles in the air of the Chinese capital Beijing. However, they were unable to prove any connection with the high level of air pollution there. “We therefore assume that the ice nucleating particles in Beijing originate more from natural sources such as dust storms or the biosphere, both of which are known as sources of ice nucleating particles, than from anthropogenic combustion processes,” says Dr. Heike Wex of TROPOS. But this is a snapshot of one place and the indirect influence of man should not be forgotten: Changes in land use or droughts have an impact on dust in the atmosphere and on the biosphere, which in turn can lead to changes in clouds”. In order to better understand the effects of humanity on the atmosphere, cloud researchers measure both at the hotspots of air pollution such as the metropolises of emerging countries and in comparatively clean regions such as the polar regions.

So far relatively little is known about the quantity, properties and sources of ice nucleating particles in the Arctic, although they are an important factor in cloud formation and thus for the climate there. Especially long time series with monthly or weekly time resolution are practically non-existent, but essential to investigate seasonal effects. In the journal Atmospheric Chemistry and Physics, an Open Access journal of the European Geosciences Union (EGU), an international team, also led by TROPOS, recently published an overview of the seasonal variations in ice nuclei concentrations in the Arctic. Samples from four research stations in the Arctic from 2012/2013 and 2015/2016 were investigated in the Leipzig Cloud Laboratory of TROPOS: Alert in Canada, Ny-Ålesund on Spitsbergen (Norway), Utqiagvik (Barrow) in Alaska (USA) and Villum (Station Nord) in Greenland (Denmark). “This gives us an overview of the variations between the seasons: Most abundant are ice nucleating particles in the air from the end of spring until the beginning of autumn, the least are found in winter and at the beginning of spring. This influences how the type of cloud cover in the Arctic changes during the year and thus the influence of clouds on Arctic warming,” explains Heike Wex. Researchers hope that the studies will lead to better predictions on climate change, as climate models are currently unable to adequately reflect the warming of the Arctic, which will lead to uncertainties ranging from rising sea levels to regional climate changes in Europe.

The complex feedback processes between biosphere and climate will also be part of the MOSAiC expedition: In September 2019, the German research icebreaker Polarstern, led by the Alfred Wegener Institute (AWI), will drift through the Arctic Ocean for one year. Supplied by additional icebreakers and aircraft, a total of 600 people from 17 countries will take part in the MOSAiC expedition. Together with an international partner, the AWI is responsible for the five main research areas: sea ice physics and snow cover, processes in the atmosphere and in the ocean, biogeochemical cycles and the Arctic ecosystem. TROPOS will play a leading role in two central measurements: Firstly, a remote sensing container for the entire ice drift will continuously explore the vertical aerosol and cloud distribution using lidar, radar and microwave radiometers. On the other hand, a tethered balloon will measure the Arctic boundary layer as accurately as possible during a flight section. Both measurements allow more or less the direct detection of the vertical distribution of the ice nucleating particles. In addition, TROPOS will again investigate the surface microlayer of the sea and melt ponds, which is likely to be a major source of ice nucleating particles in the Arctic.

Since 2016, the Collaborative Research Centre TR172 “Arctic Amplification” of the German Research Foundation (DFG) has been investigating the reasons why the Arctic warms much more than the rest of the Earth. In addition to the University of Leipzig, the research network also includes the universities of Bremen and Cologne, the Alfred Wegener Institute, the Helmholtz Centre for Polar and Marine Research (AWI) and the Leibniz Institute for Tropospheric Research (TROPOS) in Leipzig. Tilo Arnhold