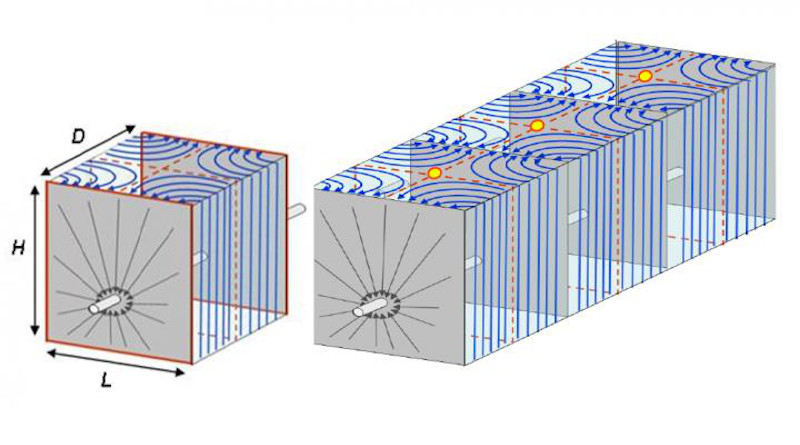 A schematic of a single flow cell (left) and a series of flow cells (right). Oil and gas flow from the porous rock into the cracks and then to the wellbore. CREDIT: Texas A&M University College of Engineering

Porous rock containing oil and natural gas are buried so deep inside the earth that shale operators rely on complex models of the underground environment to estimate fossil fuel recovery. These simulations are notoriously complex, requiring highly-skilled operators to run them. These factors indirectly impact the cost of shale oil production and ultimately, how much consumers pay for their fuel.

Researchers at Texas A&M University have developed an analytical procedure that can be used in spreadsheets to predict the amount of oil and gas that can be recovered from newly drilled wells. By modeling the pattern of oil and gas flow from older wells in the same drilling field, the researchers said they can now accurately forecast the rate of oil and gas flow for newer wells, a framework that is quicker and easier to use than complicated reservoir simulations.

“In the oil and gas industry, professionals use sophisticated reservoir simulators to get a sense of how much hydrocarbons can be recovered from the layers below the Earth’s surface. These simulations are very useful but extremely time-consuming and computationally intense,” said Dr. Ruud Weijermars, professor in the Harold Vance Department of Petroleum Engineering. “We can now do the same kind of predictions as these simulations in a spreadsheet environment, which is much faster, saving a lot of time and cost for shale operators, without loss of accuracy.”

The researchers described their findings in the March issue of the journal Energies.

Shale rocks containing oil and gas are crammed within layers that are between 3,000 and 14,000 feet underground. To access these fossil fuels, holes are first drilled vertically into the ground with the help of high-powered drills to reach the shale rock layers. The drill bit then moves in horizontally, parallel to the shale deposits. When the rocks surrounding the horizontal borehole are forced to crack by hydraulic fracturing, they begin to release valuable oil and natural gas molecules, which then rush into the borehole and rise up to storage tanks at the surface.

Before the drilling operation begins, a 3D model of the reservoir is generally created to predict the amount of oil that can be recovered from the wells. These models consider the permeability of rocks, underground geography and seismic features, among other parameters. With these inputs in place, the model virtually tiles the reservoir into small blocks, or cells, and then simulates the flow of oil through these individual blocks based on the difference in pressure on the different faces of the block.

“These simulations can run from hours to days to weeks, depending upon the number of blocks within a grid,” said Weijermars. “So, if the reservoir model has a billion cells, you would have to compute how these billion cells behave and interact to know what the resulting oil flow will be.”

To circumvent these complicated mathematical computations, Weijermars and his team focused their attention on the flow of oil within a single cell in an existing well. First, they calculated the flow of oil from the fracture site into the single cell using physics-based equations. By assuming that all the flow cells within a well are identical, they were able to scale up and obtain the oil flow rate for a period of several months’ time¬ using an analytical procedure called decline curve analysis.

The researchers then compared the predictions made by their method against those of the simulations and found that the two matched very well. However, unlike complex simulations, the researchers said their spreadsheet-based analysis was much quicker.

Once the researchers modeled the flow rate from an existing well, they could predict and improve the behavior of new wells by tweaking some aspect of the flow cells, such as the height, length or spacing of hydraulic fractures and between wells. Furthermore, they noted that this type of analysis could be done before drilling the new wells so that oil and gas recovery from the lease region can be maximized.

The researchers also said that unlike reservoir simulations that require highly trained professionals to run them, their spreadsheets can be used by technicians with very little training.

“Shale operators need to cut costs tremendously because of low global prices of crude oil. However, they also need to forecast and improve the performance of the new wells that they plan to drill,” said Weijermars. “We have tested our spreadsheet-based flow-cell analysis against sophisticated reservoir simulators in a series of studies, and the flow-cell model does a great job. This is good news for shale operators — our technique helps them cut costs and is also much faster.”