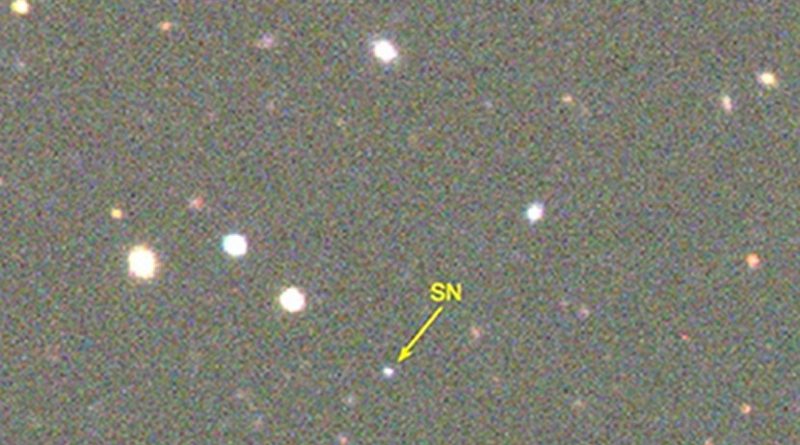 The yellow arrow marks the superluminous supernova DES15E2mlf in this false-colour image of the surrounding field. This image was observed with the Dark Energy Camera (DECam) gri-band filters mounted on the Blanco 4-metre telescope on December 28, 2015, around the time when the supernova reached its peak luminosity. Credit: D. Gerdes / S. Jouvel

The death of a massive star in a distant galaxy 10 billion years ago created a rare superluminous supernova that astronomers say is one of the most distant ever discovered. The brilliant explosion, more than three times as bright as the 100 billion stars of our Milky Way galaxy combined, occurred about 3.5 billion years after the Big Bang at a period known as “cosmic high noon,” when the rate of star formation in the universe reached its peak. The researchers reported their findings in a paper published on July 21 in the Monthly Notices of the Royal Astronomical Society.

Superluminous supernovae are 10 to 100 times brighter than a typical supernova resulting from the collapse of a massive star. But astronomers still don’t know exactly what kinds of stars give rise to their extreme luminosity or what physical processes are involved.

The supernova known as DES15E2mlf is unusual even among the small number of superluminous supernovae astronomers have detected so far. It was initially detected in November 2015 by the Dark Energy Survey (DES) collaboration using the Blanco 4-metre telescope at the Cerro Tololo Inter-American Observatory in Chile. Follow-up observations to measure the distance and obtain detailed spectra of the supernova were conducted with the Gemini Multi-Object Spectrograph on the 8-metre Gemini South telescope. The investigation was led by UC Santa Cruz astronomers Yen-Chen Pan and Ryan Foley as part of an international team of DES collaborators.

The new observations may provide clues to the nature of stars and galaxies during peak star formation. Supernovae are important in the evolution of galaxies because their explosions enrich the interstellar gas, from which new stars form with elements heavier than helium (which astronomers call “metals”).

“It’s important simply to know that very massive stars were exploding at that time,” said Foley, an assistant professor of astronomy and astrophysics at UC Santa Cruz. “What we really want to know is the relative rate of superluminous supernovae to normal supernovae, but we can’t yet make that comparison because normal supernovae are too faint to see at that distance. So we don’t know if this atypical supernova is telling us something special about that time 10 billion years ago.”

Previous observations of superluminous supernovae found they typically reside in low mass or dwarf galaxies, which tend to be less enriched in metals than more massive galaxies. The host galaxy of DES15E2mlf, however, is a fairly massive, normal-looking galaxy.

“The current idea is that a low-metal environment is important in creating superluminous supernovae, and that’s why they tend to occur in low mass galaxies, but DES15E2mlf is in a relatively massive galaxy compared to the typical host galaxy for superluminous supernovae,” said Pan, a postdoctoral researcher at UC Santa Cruz and first author of the paper.

Foley explained that stars with fewer heavy elements retain a larger fraction of their mass when they die, which may cause a bigger explosion when the star exhausts its fuel supply and collapses. “We know metallicity affects the life of a star and how it dies, so finding this superluminous supernova in a higher-mass galaxy goes counter to current thinking,” Foley said.

“But we are looking so far back in time, this galaxy would have had less time to create metals, so it may be that at these earlier times in the universe’s history, even high-mass galaxies had low enough metal content to create these extraordinary stellar explosions. At some point, the Milky Way also had these conditions and might have also produced a lot of these explosions.”

“Although many puzzles remain, the ability to observe these unusual supernovae at such great distances provides valuable information about the most massive stars and about an important period in the evolution of galaxies,” said Mat Smith, a postdoctoral researcher at the University of Southampton. The Dark Energy Survey has discovered a number of superluminous supernovae and continues to see more distant cosmic explosions revealing how stars exploded during the strongest period of star formation.