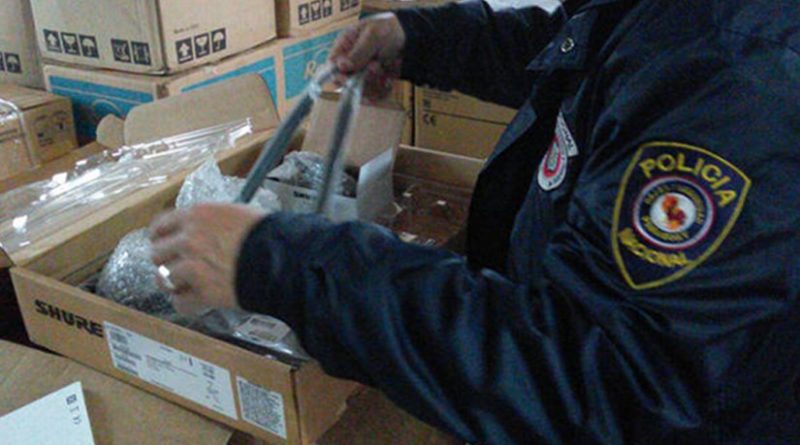 Police and customs officers across South America, including in Paraguay, took part in Operation Jupiter VII aimed at disrupting the organized crime networks behind illicit trade and the production and distribution of counterfeit goods. Photo Credit: INTERPOL.

Police and customs officers across South America have taken part in an operation aimed at disrupting the organized crime networks behind illicit trade and the production and distribution of counterfeit goods in the region and beyond, according to INTERPOL.

The operation led to the seizure of some 800,000 fake goods worth approximately USD 130 million, with 805 people either arrested or placed under investigation.

A collection of valuable archaeological pieces from Costa Rica was also recovered by National Police in Venezuela.

During the operation, police in Colombia notably arrested John Jairo Hincapie Ramirez, the subject of an INTERPOL Red Notice who is wanted in the United States on charges of money laundering in connection with trafficking in illicit goods and counterfeiting.

“Initiatives such as Operation Jupiter VII show a clear link can be drawn between trafficking in illicit goods and transnational organized crime, which makes enforcement operations of this nature of utmost importance,” said INTERPOL Executive Director of Police Services Tim Morris.

“Not only is there the vital question of protecting public safety from potentially unsafe goods, but also of dismantling those illegal networks often connected to other serious forms of crime,” said Mr Morris.

With 300,000 fake car windshields seized by Federal Brazil Police in Sao Paulo during the operation, Valdecy Urquiza Junior, Head of INTERPOL’s National Central Bureau in Brasilia, said, “The Brazilian Federal Police is committed to fighting illicit trade because of the dangers this type of crime poses to consumers and the need to identify and dismantle the criminal groups behind it. The Brazilian Federal Police encourages and supports the efforts of INTERPOL in fighting organized crime through Operation Jupiter.”

Michael Ellis, Head of INTERPOL’s Trafficking in Illicit Goods and Counterfeiting unit, said: “Fake and illicit products represent a significant risk to unsuspecting members of the public who have no idea that the goods they are buying have been illegally produced, and lack any safety controls.”

“Operations such as Jupiter VII show what can be achieved when law enforcement agencies collaborate against the criminal groups involved in illicit trade,” added Mr Ellis.

The operation was preceded by a planning meeting and capacity building training course in Brasilia, Brazil. The training session brought together 45 participants from 11 countries and private sector partners to share intelligence and investigative techniques against counterfeiting and illicit trade.

Counterfeiting and piracy crimes will be the focus of the 9th International Law Enforcement Intellectual Property (IP) Crime Conference (22 – 24 September) in Buenos Aires, Argentina. The event will be co-hosted by INTERPOL and Argentina’s Ministry of Security, in partnership with Underwriters Laboratories (UL).