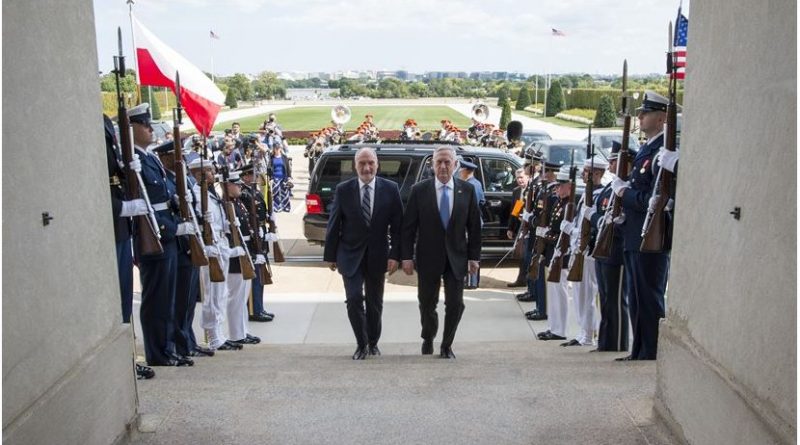 Mattis and Macierewicz last met at a June gathering of the NATO defense ministers in Brussels, a meeting focused on adapting the alliance to threats from Russia and from terrorism.

“As we were listening to the national anthem out in front of the Pentagon, I was reminded that Poland and the United States have a very long shared history of military cooperation,” Mattis said in remarks after the honor cordon held for Macierewicz.

In Washington, he said, this is demonstrated by statues to Gen. Casimir Pulaski, who served next to George Washington, and to Gen. Tadeusz Kosciuszko, a military engineer who contributed to a first major victory, both in the Revolutionary War.

“These were officers that came to our aid … when our upstart little country decided to rebel against a king in Europe,” the secretary said.

“Today you’re a valued member of NATO and Poland leads by example,” he added. “And an American-led NATO battle group, with troops from the United Kingdom and Romania, stands with your nation that came to our aid in 1776.”

The work to protect freedom continues as the U.S. and Poland stand together against any threat from the East — two countries bound by democratic values and by the NATO alliance, Mattis said.

“Our government here in Washington notes proudly that Poland continues to meet the NATO pledge, leading by example.”

In his remarks, Macierewicz told Mattis, “It was in our history, which you described, and it will be our future.”

On behalf of Poland, the minister thanked the American soldiers serving in Poland for their excellent cooperation and the efforts they make to defend the eastern flank of NATO, and Poland.

“The main goal of my visiting Pentagon is the same as the main goal of the Polish security police: to consolidate the strategic Polish-American alliance, which is fundamental to safeguarding peace in Poland and the entire eastern flank of NATO,” Macierewicz said.

“In our view,” he added, “broader U.S. military presence in our country will be required to ensure that. … We are building up our army to 200,000 soldiers and we are equipping it with the most modern weapons produced both in Poland and in the United States. For [that] I want to thank you especially.”