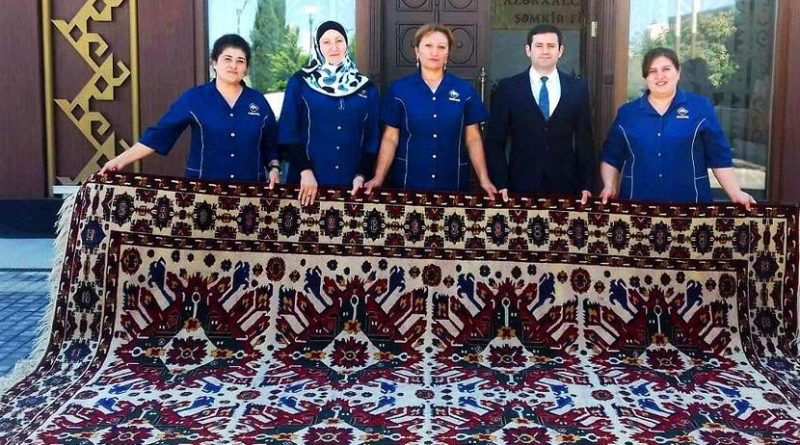 The steadfast leadership demonstrated by President Ilham Aliyev in the development of carpet weaving industry and carpet museums across Azerbaijan is a great contribution to strengthening the heritage of this nation and connecting the past with the present in the Caucasus region. Indeed the history of Azerbaijan is truly a global treasure, were carpet design and tailoring has always attracted international attention and prestige.

Why has carpet weaving received so much attention in the recent years? Why is there so much investment allocated to this sector? The president of Azerbaijan H. E. Mr. Ilham Aliyev states: “Carpet weaving is our national art and national wealth. The people of Azerbaijan have given to this art a new life for centuries. Our carpets are exhibited in the principal museums worldwide, and through this work of art, we show to the world an exceptional talent of Azerbaijani people.”

According to the President of Azerkhalcha Open Joint Stock Company, Prof. Vidadi Muradov: “Today, it is of great historical significance and ethnically important to note that precious and richly designed carpets have been woven in the Karabakh District. The Armenians, who have occupied the historic Azerbaijani lands, show and present Azerbaijani carpets as their own artistic works. However, the entire world must know the truth that the Republic of Azerbaijan is the homeland of carpet weaving and these carpets are woven using ancient designs created by our hardworking people.”

On August 25, 2018, was celebrated a historic, memorable day for Azerbaijani carpet masters. President Ilham Aliyev took part in the grand opening ceremony of the Ismayilli branch of “Azerkhalcha” Open Joint Stock Company. Every visit conducted by Azerbaijani President becomes an unforgettable experience for all carpet makers; they all know that this precious art, protected and excelled by each one of them, has received a special attention, funding and strategic importance thanks to the hard work and statecraft of President Ilham Aliyev.

Experience has shown that each meeting with the President of Azerbaijan opens new perspectives for further development of carpet weaving. During his speeches at the opening ceremonies of the branches of “Azerkhalcha,” the president highly appreciates the dedication of carpet makers and successful completion of their assignments.

On May 4, 2018, at the opening ceremony of the Khachmaz branch, President Ilham Aliyev talked about the achievement of several goals, adding that the work done in Ismayilli branch by the entity is admirable; “The carpet weaving has a great history and future. The establishment of the ‘Azerkhalcha’ Company was aiming this goal. The tasks and duties I have set up are being fulfilled and the carpet-weaving factory in Ismayilli is showing this hard work once again.”

Certainly, a great care by the state towards carpet weaving, as well as real work and concrete results, stands behind these valuable words.

According to Mr. Tural Safarov, a distinguished Azerbaijani Journalist: “Artificial hindrances were created in the Soviet Union period in the field of investigating the carpet art and carpet production employing national designs because of their close ties with the history and life of the Azerbaijani people. Carpets are one of the essential tools in learning the history of our people. The ornaments used on carpets provide valuable information about the lifestyle of a specific period in Azerbaijan’s history. Despite of many issues in this field, great national leader Heydar Aliyev took important steps in the development of carpet weaving. In the 1970’s the Carpet Museum was launched in Azerbaijan, and the necessary conditions were established for the researchers and carpet makers. Similar to other national values at that time, the development of the carpet weaving was one of the most important steps taken by our national leader to build an independent state, because the carpet weaving had become an important instrument on the road to independence for our people. Giving life to our ancient history and rich statehood traditions in carpet patterns encouraged patriotic, nationalistic feelings to the younger generation.”

Special attention was given to the development of carpet weaving after gaining independence for the second time with Heydar Aliyev’s return to political power in Baku.

One of the most memorable moments of President Ilham Aliyev’s work in this field, while successfully pursuing the path of Azerbaijan’s national leader, is the establishment of the “Azerkhalcha” Open Joint Stock Company in 2016. The “Azerkhalcha” established at the initiative of the president, the architect of this idea, contributed to the accomplishment of several strategic goals.

The branches of “Azerkhalcha” in Fuzuli (Horadiz), Agdam (Guzanli), Tovuz, Agstafa, Gazakh, Shamkir, Guba, Ismayilli, Khachmaz and Gabala districts are operational. The construction of these buildings was completed in 2016-2017 and all branches are fully equipped.

Mr. Ilham Aliyev, President of the Republic of Azerbaijan, has participated in the opening ceremonies of: Fuzuli branch of the “Azerkhalcha” on November 12, 2016; Shamkir branch on August 20th; 2017, in Guba branch on December 7; and Khachmaz branch on May 4, 2018; and Ismayilli branch on August 25.

The construction of carpet-making workshops and the establishment of infrastructure in Baku and Nakhchivan cities, Absheron, Lankaran, Bilasuvar, Kurdamir, Gobustan, Shabran, Goranboy and Tartar districts are well under way, by the instruction of the Azerbaijani head of state; 10 more carpet production workshops will be set up in 2019. There is no doubt that Azerbaijani carpets will have a greater presence in International markets and conquer new horizons in the future.

One thought on “Ilham Aliyev: ‘Azerbaijan Is The Homeland Of Carpet Weaving’ – OpEd”