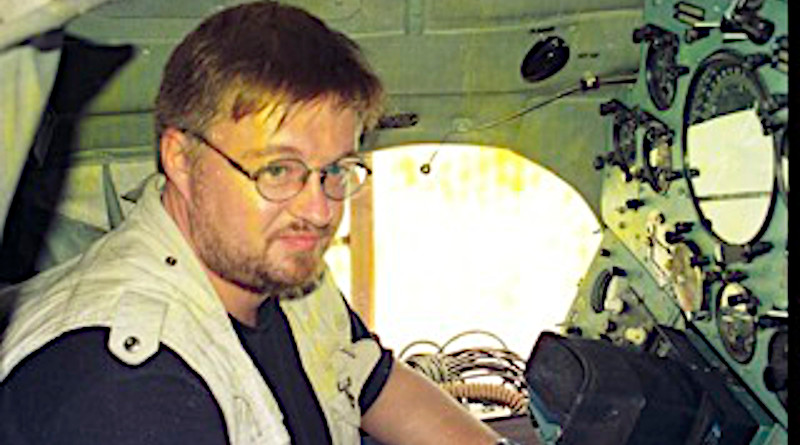 Prominent Russian-American journalist Andre Vltchek, who co-authored a book with Noam Chomsky “On Western Terrorism: From Hiroshima to Drone Warfare” in 2013, was found dead under suspicious circumstances in a chauffeured car in Istanbul while coming back from a town in northern Turkey.

Upon arriving at their hotel in Istanbul in the wee hours of Tuesday morning, his wife tried to wake Vltchek who she presumed to be asleep, but he was unresponsive. An ambulance was called, and paramedics confirmed that Vltchek had died.

The probable cause of death appears to be poisoning and a nerve agent such as sarin cannot be ruled out, as it has frequently been used for false flag operations and politically motivated assassinations by Turkey-based militants in Syria.

Motive of the murder seems obvious, though. Being an anti-imperialist journalist with pro-Russia political stance, he was obviously on the hit-lists of several terrorist outfits, as the Syrian government has been waging an anti-terrorism campaign in northwest Idlib province with Russia’s backing since early this year.

Vltchek’s suspicious death is reminiscent of another alleged “suicide” of the founder of the White Helmets James Le Mesurier in November last year, also in Istanbul, and both the assassinations were likely caused by the same terrorist group, al-Nusra Front.

At the time of James Le Mesurier’s death, speculations were rife in the local Turkish media that the founder of the White Helmets had been running away from someone before he fell or was pushed to death.

Turkish newspaper Daily Sabah reported [1] on December 10: “The biggest question is why Le Mesurier committed suicide from a height of 7 meters and after walking for 10 meters on a lean-to roof. A possible answer is he was running away from someone who broke into his house and tried to leap on the roof of a building across the street.”

James Le Mesurier was found dead on November 11 last year in suspicious circumstances after falling off a two-story apartment building in downtown Istanbul. He was alleged to have committed suicide by jumping off the second floor of the building, though the subsequent findings cast aspersions over the suicide theory, as the circumstances of the inexplicable death indicated likely homicide.

The report further observed: “Security camera footage from the last hours of Le Mesurier as he was shopping, the first photos from the scene and contradicting statements of his wife Emma Winberg may change the course of the investigation.

“Winberg said she looked for her husband inside the house and saw his lifeless body when she looked out of the window. Police are investigating now how she was able to wake up about half an hour after she took a sleeping pill and why she stacked a large amount of money inside the house into bags immediately after Le Mesurier’s body was found.”

Much like Erik Prince of the Blackwater fame, Le Mesurier’s work included training several thousand mercenaries for the United Arab Emirates (UAE) oil and gas field protection force, and designing security infrastructure for the police state of Abu Dhabi – a job description that helped him recruit Syrian volunteers from refugee camps in Turkey, willing to do dirty “humanitarian work” in enclaves carved out by militant factions in Syria’s war zones.

In this line of work, one is likely to make powerful enemies, including intelligence agencies and militant groups. In particular, the White Helmets operate in al-Nusra Front’s territory in Syria’s northwestern Idlib province and are known to take orders from the terrorist outfit.

The assassination of James Le Mesurier should be viewed in the backdrop of the killing of the Islamic State’s chief Abu Bakr al-Baghdadi on October 26 in a US special-ops raid.

It’s important to note in the news coverage of the killing of al-Baghdadi that although the mainstream media had been trumpeting for the last several years that the Islamic State’s fugitive chief had been hiding somewhere on the Iraq-Syria border in the east, he was found hiding in northwest Idlib province, under the control of Turkey’s militant proxies and al-Nusra Front, and was killed while trying to flee to Turkey in Barisha village five kilometers from the border.

Not surprisingly, the White Helmets area of operations is also Idlib governorate in Syria where they are permitted to conduct purported “search and rescue operations” and “humanitarian work” under the tutelage of al-Qaeda’s Syrian affiliate.

In fact, the corporate media takes the issue of Islamic jihadists “commingling” with Turkey-backed “moderate rebels” in Idlib so seriously – which could give the Syrian government the pretext to mount an offensive in northwest Syria – that the New York Times cooked up an exclusive report [3], on October 30, a couple of days after the special-ops night raid, that the Islamic State paid money to al-Nusra Front for hosting al-Baghdadi in Idlib.

Despite detailing the operational minutiae of the special-ops raid, the mainstream news coverage of the raid deliberately elided over the crucial piece of information that the compound in Barisha village five kilometers from Turkish border where al-Baghdadi was killed belonged to Hurras al-Din, an elusive terrorist outfit which had previously been targeted several times in the US airstrikes.

Although Hurras al-Din is generally assumed to be an al-Qaeda affiliate, it is in fact the regrouping of the Islamic State jihadists under a different name in northwestern Idlib governorate after the latter terrorist organization was routed from Mosul and Anbar in Iraq and Raqqa and Deir al-Zor in Syria in 2017 and was hard pressed by the US-led coalition’s airstrikes in eastern Syria.

In a brazen offensive in January 2019, however, al-Nusra Front’s jihadists completely routed Turkey-backed militants, even though the latter were supported by a professionally trained and highly organized military of a NATO member Turkey. And al-Nusra Front now reportedly controls more than 70% territory in the Idlib governorate.

The reason why al-Nusra Front was easily able to defeat Turkey-backed militants appeared to be that the ranks of al-Nusra Front were swelled by highly motivated and battle-hardened jihadist deserters from the Islamic State after the fall of the latter’s “caliphate” in Mosul in Iraq and Raqqa in Syria in July and October 2017, respectively.

In all likelihood, some of the Islamic State’s jihadists who joined the battle in Idlib in January last year were part of the same contingent of thousands of Islamic State militants that fled Raqqa in October 2017 under a deal brokered [5] by the US-backed Syrian Democratic Forces (SDF).

Al-Jolani returned the favor by hosting the hunted leader of the Islamic State for months, if not years, in a safe house in al-Nusra’s territory in Idlib, before he was betrayed by an informant within the ranks of the terrorist organization who leaked the information of the whereabouts of al-Baghdadi to the American intelligence, leading to the killing of the Islamic State chief in a special-ops raid on October 26.

Lastly, regarding the death of the founder of the White Helmets, James Le Mesurier, in downtown Istanbul, it’s worth pointing out that Turkey has been hosting 3.6 million Syrian refugees and myriad factions of Ankara-backed militant proxies.

It’s quite easy for the terrorists of al-Nusra Front and the Islamic State to intermingle with Syrian refugees and militants in the Turkish refugee camps, and no town or city in Turkey, including the capital Ankara and the metropolis Istanbul where James Le Mesurier was murdered, is beyond the reach of Turkish-backed militant factions and Syrian jihadists, particularly the fearsome and well-connected al-Nusra Front that has patrons in the security agencies of Turkey and the Gulf States.

Plausibly, one of the members of the White Helmets operating in al-Nusra’s territory in Syria’s Idlib betrayed his patrons for the sake of getting a reward, and conveyed crucial piece of information regarding the whereabouts of al-Baghdadi to the founder of the White Helmets, Le Mesurier, who then transmitted it to the British and American intelligence leading to the October 26 special-ops raid killing al-Baghdadi.

In all likelihood, the assassination of the founder of the White Helmets was Islamic jihadists’ revenge for betraying the slain chief of the Islamic State. Thus, while James Le Meusurier was assassinated for committing treachery against jihadists’ cause, Andre Vltchek was likely murdered for his pro-Russia and anti-terrorist political stance, making Turkey, Istanbul in particular, an unsafe place for principled and dedicated leftist journalists and social activists.