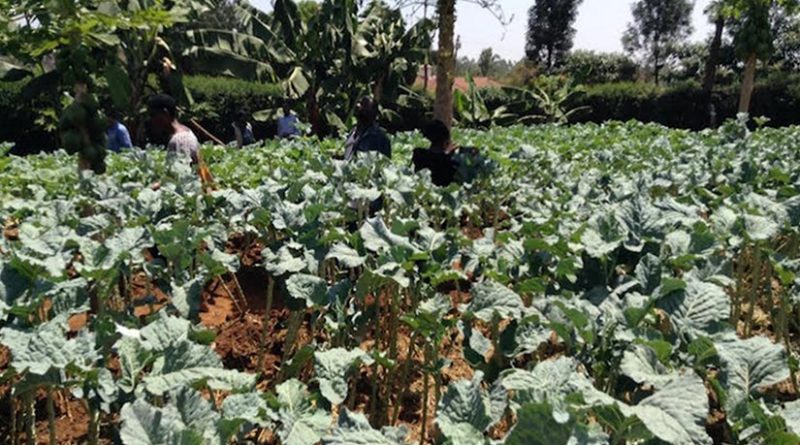 In Kenya, like most African countries, small-scale farmers who are the majority are opting for sustainable solutions. One such farmer is Albert Waweru, a retired police officer with 1.75-acre farm in Kasarani on the outskirts of Nairobi. He has 50 dairy cows that produce 290 litres of milk daily. He also rears poultry, dairy goats and has several green houses where vegetables are grown.

But he is no ordinary smallholder farmer. He has taken to what experts call climate smart agriculture. To counter the challenge of water, for example, he embarked on harvesting rainwater from rooftops in his compound and storm water flowing into his compound.

“I harvest any drop that comes my way,” he says. The water is preserved in a network of several underground concrete tanks some of them 12 metres deep. This has ensured that he has enough water at any moment on his mixed farm.

“I have been invited to various forums where I have interacted with policy makers, I didn’t know that my solution to water scarcity would be showcased as a good practice to fellow farmers,” he says. He adds that farmers from Kenya and neighbouring countries visit his farm for bench marking.

Knowledge and best practices sharing among countries and individual famers is in fact vital. Participants in the Second Africa Climate Smart Agriculture (CSA) Alliance conference from October 11-13, 2016 in Nairobi shared this view. They said it would enhance adoption of best practices suitable to the needs of each country. The Alliance is a continetal platform formed to help smallholder farmers reduce climate risks.

The New Partnership for Africa’s Development (NEPAD) Agency convened the meeting in collaboration with the Government of Kenya.

The Africa CSA Alliance is spearheading implementation of the African Union’s Vision to reach 25 million farm households practicing CSA by 2025. This is in line with the Comprehensive Africa Agriculture Development Programme‘s (CAADP) 2015-25 Results Framework, which was endorsed at the Africa Union Summit in Malabo, Equatorial Guinea, in June 2014.

The Conference focused on “Implementing African INDCs for Growth and Resilience in Agriculture”. It emerged during the forum that majority of African countries included agriculture in their Intended Nationally Determined Contributions (INDCs) adopted during COP21 in Paris in December 2015.

Stakeholders in the agriculture sector asked African governments to fast track policy guidelines geared towards adoption of smart agricultural practices. Estherine Fotabong, NEPAD Director of Programmes Implementation and Communication, regretted that in general there has been low adoption of CSA practices.

She attributed the situation to land ownership patterns that deny women land ownership though they constitute the bulk of small-scale farmers on the continent. Resort to CSA practices is also hampered by poor access of smallholders to affordable credit facilities.

Estherine said that poor access to technologies particularly among women is also hampering adoption of CSA practices on the continent. “It is high time African governments commit more resources to support CSA practices uptake such as conservation agriculture,” she said.

She called for integration of indigeneous knowledge practices backed by scientific research as part CSA practices in Africa’s quest to build resilient communities in the face of climate change.

African farmers, she said, have knowledge that can be used to cope with climate change. “We need to engage with farmers. They have rich information and knowledge that can help experts to make informed decisions as well. It is high time indigenous knowledge is documented,” she emphasized.

Estherine said that through NEPAD’s Gender Climate Change Agriculture Support Programme they intend to support more women farmers. “Through our Climate Fund programme, we hope to continue financing grassroots initiatives for the 2025 target. It is our belief that governments will put in place investments that will support farmers to adopt CSA pratices,” she said.

Indeed govermments apreciate that they have a crucial role to play in promotion of CSA. Kenya’s Fisheries Principal Secretary Japhet Ntiba said the government of Kenya has introduced a climate change policy in all state departments to address the effects of harsh climatic changes. He said the move would enhance the country’s efforts in boosting food security through promoting smart agricultural practices in light of climate change.

INDCs are the primary means for governments to communicate internationally the steps they will take to address climate change in their own countries. According to Zipora Otieno, FAO Kenya’s National Coordinator, INDCs reflect each country’s ambition for reducing emissions and enhancing resilience, taking into account its domestic circumstances and capabilities,

She told IDN that the word ‘intended’ is being used because countries are currently communicating proposed climate actions. She noted that ‘intended’ will be dropped and INDC converted into Nationally Determined Contribution (NDC).

Most African countries, she observed, have not converted their INDCs to NDCs. Zipora however explained that INDCs are effective in enhancing resilience in the agriculture sector in Africa.

First, they would help catalyse climate finance flows to developing countries for implementation of proposed actions. “For sub-Saharan Africa, where approximately 80 percent of the population derive their livelihood from agriculture, the funds will mainly be used to enhance resilience in the agricultural sector.”

Secondly, INDCs of most developing countries have helped guide country-level climate adaptation planning efforts. Many African countries, she observed, have put in place concrete strategies to enhance the resilience of the agricultural sector, an engine of their economic growth.

Zipora said the Green Climate Fund and other providers of climate finance should scale up their support to developing countries to adapt to climate change. Focus, she said, should shift to building the capacity of vulnerable countries so that they access the funds.

Knaepen told IDN that COP21 in Paris was the first conference of parties ever that dedicated a full day to ‘agriculture’. Reasons for the increased attention, she said, are due to climate change, lobby work from CSA alliances and NGOs such as Oxfam. Attention to agriculture can also be attributed to emerging criticism that climate finance has been dedicated largely to mitigation and less to adaptation activities.

ECDPM is an independent foundation that monitors and supports development cooperation between the European Union and the African, Caribbean and Pacific countries.

She said one of the bottnekcs is financing the implementation of the (I)NDCs. The process is rather costly. The World Development Report estimates the incremental costs of adaptation in developing countries would amount to between USD 30 and 100 billion per year until 2050.

Besides, incremental costs of climate change mitigation in developing countries are estimated to USD 265-565 billion per year until 2030.

Note: This report is part of a joint project of the Secretariat of the ACP Group of States and IDN, a flagship agency of the International Press Syndicate.