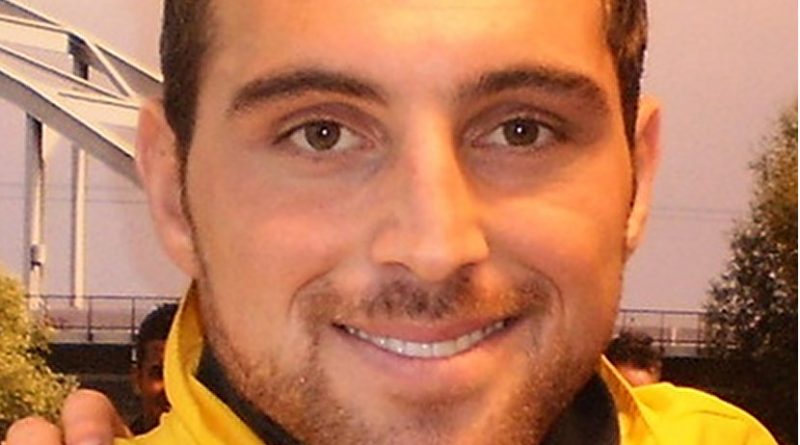 (RFE/RL) — Guram Kashia, captain of Georgia’s national football team, has fended off many opponents during his career. Now he’s facing one off the pitch.

The 30-year-old defender has been blindsided by criticism from home since he wore a captain’s armband adorned with the rainbow colors in support of LGBT rights during a match on October 15 for his professional team, Vitesse Arnhem, in the Netherlands.

The move, made under the auspices of the Dutch Football Union and its campaign “to promote the awareness of diversity,” touched a nerve in Georgia, a nation at the cultural crossroads of integration with the West and the conservative values of the Georgian Orthodox Church.

“LGBT Kashia must be cut off from the Georgian team!” local journalist Giorgi Gigauri of the Asaval-Dasavali newspaper wrote on October 19.

“Georgia’s football fathers should know that Georgian men will boycott the team if LGBT-Kashia dares to play in the national team jersey,” he added.

On the Facebook page of Movement For Equality, a group dedicated to supporting the LGBT community in Georgia, several fans echoed those sentiments and also questioned whether Kaisha, who has not commented on the furor, wore the armband of his own volition.

“In short, Guram Kaisha, you can no longer play matches with the Georgian team,” wrote a user who identified himself as a male from Tbilisi with the profile name La Uko.

The response comes as little surprise to some.

Georgia, a country of 3.7 million people wedged in between Russia, Turkey, Azerbaijan, and Armenia, has made little headway in developing lesbian, gay, bisexual, and transgender (LGBT) rights.

Studies suggest that of all the minority groups in Georgia, homosexuals are under the greatest pressure — with more than 80 percent of survey respondents expressing strong negative attitudes toward homosexuality.

Georgia ranked as the world’s third-most homophobic country in the World Value Survey, with some 93 percent of Georgians saying they would be against the idea of having a gay neighbor.

Social research on homophobia in Georgia shows that attitudes toward gays are strongly influenced by traditional stigmas, taboos, and values promoted by the Georgian Orthodox Church.

Those studies also show that psychological and physical violence often accompany widespread homophobia that is backed by traditional ideologies and a Soviet legacy of condemnation.

Gays in Georgia also often face domestic violence within their own families when they reveal their homosexuality. As a result, many homosexuals in Georgia avoid coming out publicly — impeding their ability to defend their own rights.

In October 2016, a 34-year-old transgender woman died in a Tbilisi clinic after succumbing to injuries she suffered in an attack, one of more than 30 violent assaults carried out against LGBT people.

In 2013, LGBT activists who tried to carry out a gay-pride march in Tbilisi were severely beaten by members of antigay groups.

Not all of the comments over Kashia’s armband have been negative, however.

Former Georgian Football Federation President Domenti Sichinava has come out strongly in defense of the defender, who has made 58 national team appearances since 2009 and twice been named the country’s footballer of the year.

“Guram, for me personally, you are and always [will] be part of Georgian football. You have repeatedly stated that you are honored to play under the flag of Georgia and I am proud to have worked with you for many years,” Sichinava said in a Facebook post.

The furor surrounding Kashia’s armband comes at a time when Georgians are struggling to accept the paradoxes of their modern-day society.

A study published in 2016 by the Heinrich Boll Foundation praised Georgia for making “significant progress” on the “legislative level” against a “background of exacerbating homophobic attitudes.”

Still, the study concluded the new laws protecting the rights of gays in Georgia were a result of “the country’s declared pro-Western course” rather than an “informed choice of the political elite” or a sign of a changing society.

Nino Bolkvadze, a 40-year-old antidiscrimination lawyer, is running for a seat on the Tbilisi City Council on the ticket of the opposition Republican Party.

Bolkvadze says she understands the isolation the LGBT community faces. She came out publicly in 2015 and her brother has not spoken to her since.