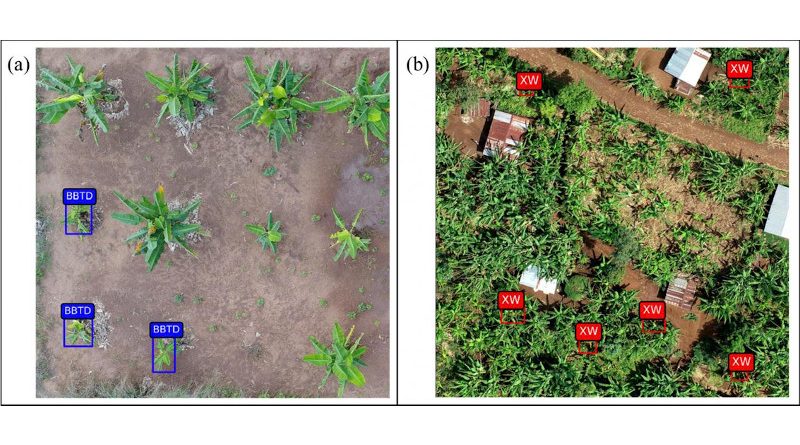 New research shows how a combination of imagery from mobile phones, drones and satellites can be used to clamp down on banana threats. The images of varying resolutions are fed into a platform “trained” through machine learning to identify banana crops and analyze threats with 97% overall accuracy. The findings were published in the ISPRS Journal of Photogrammetry and Remote Sensing.

The research case studies, conducted in the Democratic Republic of Congo and Republic of Benin, have important implications for the 90 million people in East, West and Central Africa who rely on bananas and plantains as a primary food source. These mostly small-scale farmers are dependent on their cultivation for food, income and job security.

The increasing arrival and spread of serious diseases, fungal infections and viruses, due to climate change and land-use change among other factors, pose a serious food security threat. There are six major and devastating threats to banana, among them bunchy top disease (BBTD) and Xanthomonas wilt of banana (BXW).

“Threats are currently detected by experts in the field using cell phones,” said Michael Gomez Selvaraj, a crop physiologist and co-author at the Alliance of Bioversity International and the International Center for Tropical Agriculture (CIAT). “But to track and detect diseases across huge tracts of land at country, district or village level, you need a platform that quickly detects threats.”

Using a pixel-based classification system, first the researchers trained the model to detect banana plants on mixed-farm systems, where smallholder farmers grow many things on one piece of land. After ‘learning’ the patterns and algorithms of banana plants, the researchers then trained the platform to analyze physical symptoms of the six diseases, and the percentage threat.

Information about the severity of the specific threat and its spread can be sent to organizations or government authorities who can take immediate measures to clamp down on them. “Otherwise potential threats multiply quickly, for example, farmers may give infected crop stems to others, and, in the case of a virus, spread it around the country or district without knowing until it’s too late,” said Selvaraj.

Currently, most disease surveillance systems focus on a single-sensor based solution that cannot monitor larger landscapes through mobile phones or drones. This method combines field-level information captured by farmers or extension workers in the field, with satellite data to detect crop area, and drones deployed to analyze the exact threat and its intensity.

“We can now detect six major banana threats with speed and accuracy with our Tumaini mobile phone app,” said Selvaraj. The database is free for farmers, organizations and governments to use, and has been downloaded from the Google App store 2,500 times.

“The next step is to find financial support to bring more partners together, so we can track more data over a wider area. The hope is to cover Africa, India, Australia and Latin America where bananas are a major crop and these threats are looming,” he added.

Graham Thiele, the Director of the CGIAR Research Program on Roots, Tubers and Bananas, said: “We congratulate the team on this breakthrough research. It validates the use of aerial images for disease detection, potentially transforming our ability to assess threat impact.”

The platform can also be used to track other pests, diseases or viruses for other threats where symptoms are visible. For example, to track the spread of fall armyworm, an invasive crop pest which can feed on 80 different crop species including maize, and affected 83% of maize farmers in Kenya, causing losses of 33%, and costing an estimated US$3.6 to $6.2 billion across the 12 countries in the region.