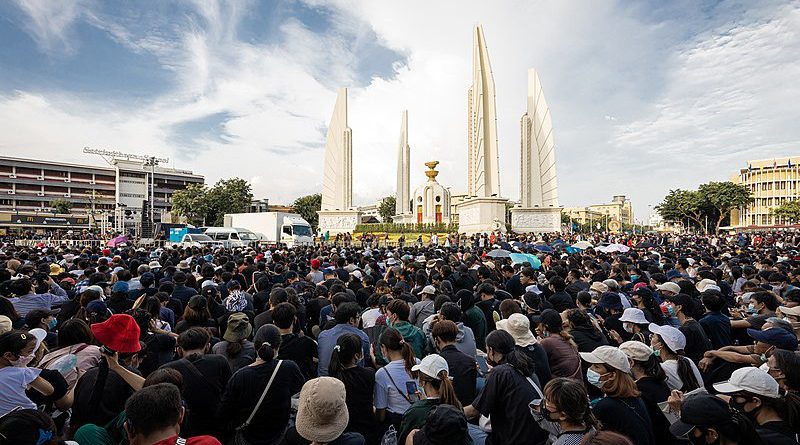 The sizable and unrelenting protests we are seeing in Thailand are a sign of the new coronavirus disease (COVID-19) era. Populations are fed up with the inequality that the COVID-19 pandemic has helped expose. Thailand, like many other countries, is going through a catharsis.

Protests are not new in Thailand, but this year’s demonstrations are different. To be sure, a repeat of the scale and violence of the 2010 “Red Shirt” protests or the 2013-14 anti-government protests, in which participants took over parts of central Bangkok, is not taking place in the current protests. Those protests were between political parties, not between the populace and the government as we see today.

Interestingly, Thailand’s response to COVID-19 has been better than many other countries around the world. It is described by public health experts as a “COVID-19 star,” with fewer than 60 deaths and just 3,700 cases, even though it was the first country outside of China to report COVID-19 infections. A stringent government lockdown and decontamination program, enforced by the military and police, quickly followed.

But Thailand, like other countries, has its own unique issues. It relies heavily on international tourism, which has been severely affected by the pathogen’s spread around the world. And interruptions to the internal economic flow between northern and southern parts of the country because of the lockdown severely affected communities and families. With the tourism economy collapsing and economic contraction poised to hit 10 percent this year, Thailand is quickly becoming one of Asia’s biggest economic losers as a result of the virus. That spells instability.

The current demonstrations started in July with small-scale protests around university campuses. Demonstrations were also seen in historically conservative and predominantly “Yellow Shirt” southern provinces such as Nakhon Si Thammarat, Phatthalung, Phuket, and Songkhla. Once the protest movement began to address systemic issues, the focus of the Thai youth turned to Bangkok. Thailand’s government last week declared a strict new state of emergency for the capital as the student-led protest movement against the country’s traditional establishment grew. This was lifted on Thursday even though the protests have continued.

The Thai government has vowed to keep the country’s leadership intact despite the protesters’ calls for a new constitution and the curbing of King Vajiralongkorn’s powers and wealth. The demonstrators are also calling for the resignation of Prime Minister Prayut Chan-o-cha. The government is trying to keep order by banning unauthorized gatherings of more than five people. In addition, emergency decrees give the authorities the power to prevent unrest, including by detaining people temporarily without charge.

They also outlaw news that distorts information or could cause a “misunderstanding.” These measures are being ignored by the protesters.
Importantly, counter-protesters are now beginning to appear. They want to keep the government and its programs intact in order to begin the country’s recovery immediately and within the context of the current system of government. This dividing line between immediate and thought-out change is an important driver of how other governments are and will contend with population segments that are severely affected by COVID-19’s economic and social damage. Many countries around the world have yet to see the total effect.

Remarkably, COVID-19 and economic hardships are not being vocalized by the Thai demonstrators. According to sources, the catalyst for the protests are the long periods of lockdown and antivirus measures that are resulting in deepening economic pessimism, rising poverty and a growing sense of futility for many young people. Students are especially hard-hit, with almost half a million Thai students set to graduate from the country’s universities over the course of the year — 80 percent of them do not have immediate or near-term employment prospects. They make up the bulk of the protesters.

Moreover, generational divisions in Thai society are playing a role in the protest movement. Older Thais generally accept the current order and the youth are engrained with cultural responsibility to their elders. The pathogen’s impact on the social sphere is highlighting the differences between age groups within Thailand’s middle class. Young people, who are emboldened by social media messaging, want change, while older generations prefer order and stability — a story that is being repeated around the world during this pandemic. Thais who are migrant workers or rural poor are not part of the protest movement and thus remain on the sidelines. Ironically, it is these vulnerable, but quiet, parts of the Thai population that are most affected.

Regional leaders are keenly aware that they will have to consider how to deal with their own restless populations should they be emboldened by events in Thailand. It is of great importance to watch how Bangkok contends with its domestic situation as the economic hardships of the pandemic fully emerge. How it contends with the situation regarding protester demands can affect not just its economic recovery but also regional stability and social cohesion and norms in a hyper-connected environment. Countries around the world are facing their own key questions of how best to move forward in the age of COVID-19.