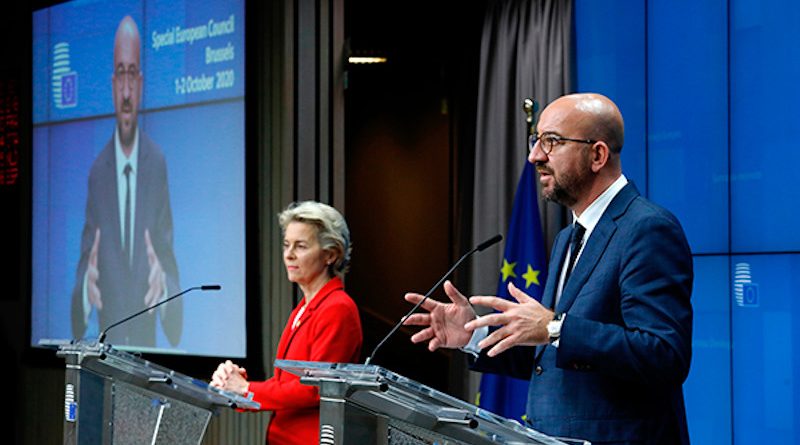 EU leaders have met in Brussels to discuss many important items on external relations, including the recent tensions with Turkey in the Eastern Mediterranean. This neighbour, strategic ally and candidate country for accession to the EU, has been very much at odds with Greece and Cyprus over the continental shelf and the borders of the Exclusive Economic Zone (EEZ), as well as with drilling rights in the region. For this reason, the Turkish dossier is back on the EU leaders’ agenda. The differences between member states make it difficult to come up with a harmonised response. Even if interdependency with Turkey is beyond debate for EU leaders, the future of relations is still to be defined. For quite some time the EU became too comfortable in this very fragile status quo but recent developments have shown once again that the situation is not sustainable for long. It is clear that Turkish-EU relations need a functioning framework. The tensions in the Eastern Mediterranean could become a watershed as the High Representative, Josep Borrell, has suggested, since they will force all sides to think creatively.

The roots of the problem in the Eastern Mediterranean

The roots of the problem lie in the disputed continental shelf areas and EEZs in the Eastern Mediterranean. Until recently this was mostly a local affair. However, natural gas resources have been found and once again the area has become a geopolitical game board. The definition of EEZs is considered to be vital when it comes to exploration rights and transport.

According to the United Nations Convention on the Law of the Sea (UNCLOS) –which Turkey has never signed and ratified–, islands can also have EEZs. The problem is that Greece has various small islands very close to the Turkish coast. The former’s EEZ claims clash with Turkey’s, so negotiation and arbitration are needed to settle the respective positions. Both sides, in the meantime, blame each other for having maximalist attitudes. It is important to underline that the problems on the table are longstanding and multifaceted. They are very much connected to various issues, including Cyprus, the decades-long disputes between Turkey and Greece in the Aegean and Mediterranean seas and the current stalemate between Turkey and the EU.

Even if both Turkey and Greece have been in favour of returning to the negotiating table during all these times of gunboat diplomacy, two NATO allies on the brink of a military clash has never been the best scenario for anyone. This situation is affecting NATO’s functioning and weakening it. That is the reason why both NATO and the EU attempt to offer de-escalation mechanisms and intermediation.

An important geopolitical challenge for the EU

When it comes to the EU, as a supranational institution, matters are relatively complicated. EU member states, mostly Greece and Cyprus but also France, have been sides in the conflict. While the attitudes of other member states vary, France has been the most vocal and active EU member state to support Greece in the region. It has already sent naval units to support Greece, while dropping out from a NATO maritime security mission after an incident with Turkey. In the meantime, both High Representative Josep Borrell and German officials –including Chancellor Angela Merkel herself–, as holders of the EU’s rotating Council Presidency, have been trying to play a role as intermediaries.

Greece, supported by an ever more assertive France, has been claiming that this is an issue of internal solidarity for the EU. As a country with a fair share of crises with the EU for the last decades –be it the Eurozone crisis or burden sharing when it comes to asylum seekers–, Greece demanded the full support of the Union. For the latter, how to support Greece (in terms of foreign and security policy in general and maritime borders in particular, being a member-state competence) has been a difficult question while trying to avoid further alienating Turkey.

Following Turkey’s drilling activities in May, the European Council issued a statement calling upon Turkey to end its ‘illegal activities in the Eastern Mediterranean’ and respect ‘the sovereignty of all EU member states over their territorial sea as well as all their sovereign rights in their maritime zones’. The message has been repeated various times over the summer, while high-ranking EU officials have made visits to the region. Then the EU called a special European Council (EUCO) meeting to discuss the road ahead with Turkey. The possibility of sanctions was on the agenda, while it was clear from the beginning that there was no consensus on them among the member states.

The EUCO conclusions stated that ‘the EU has a strategic interest in a stable and secure environment in the Eastern Mediterranean and in the development of a cooperative and mutually beneficial relationship with Turkey’. The key challenge is, however, how to guarantee that stable relationship with Turkey in the future. The EU is challenged with a player like Turkey on its borders. Turkey’s unilateral interventions in Syria and Libya have caused much stress for the Union and all these unresolved problems have given rise to ‘Turkey fatigue’. With an official framework that is not working –Turkey being a candidate country, which implies the fulfilment of Copenhagen criteria– it is not easy to relate with a third country. Turkey has been more unilateral and assertive for some time now when it comes to foreign and security policy. It has also questioned its traditional Western vocation in the 21st century and the dramatic state of affairs between Turkey and the EU has not necessarily helped anchor Turkey to the west. The recent tensions in the Eastern Mediterranean have once again shown the need to have a functioning dialogue channel with Turkey.

Having said that, the European Council meeting and its conclusions have shown that there must be a more transactional relationship with Turkey. EU leaders have asked to abstain from ‘unilateral actions which run counter to the EU interests and violate international law and the sovereign rights of EU Member States’. In return, the idea would be to offer a ‘positive political EU-Turkey agenda’. The specific items on the agenda are the modernisation of the Customs Union and the facilitation of trade, with people-to-people contacts, high-level dialogue and continued cooperation on migration issues. A multilateral conference on the Eastern Mediterranean has also been called for by the EU’s leaders, inviting Josep Borrell to engage in talks with all the sides involved.

Beyond the usual rhetoric of European Council conclusions, it is important to underline what they did not include. There were no references to accession negotiations or the current domestic situation in Turkey; there was no mention of democratic backsliding or the rule of law in the country; and there was no intention of establishing conditionality through a positive political agenda. This once again shows that the EU is moving towards to a more transactional relationship with Turkey. It is fair to say that this was already the form of cooperation in the EU-Turkey Statement on refugees. Nonetheless, even back then there was the intention to include conditionality and recent developments have shown that the road ahead must necessarily be far more transactional. Where the road will lead is still a question that remains unanswered.

Home » EUCO Diaries: Will Tension In Eastern Mediterranean Lead To A Watershed? – Analysis