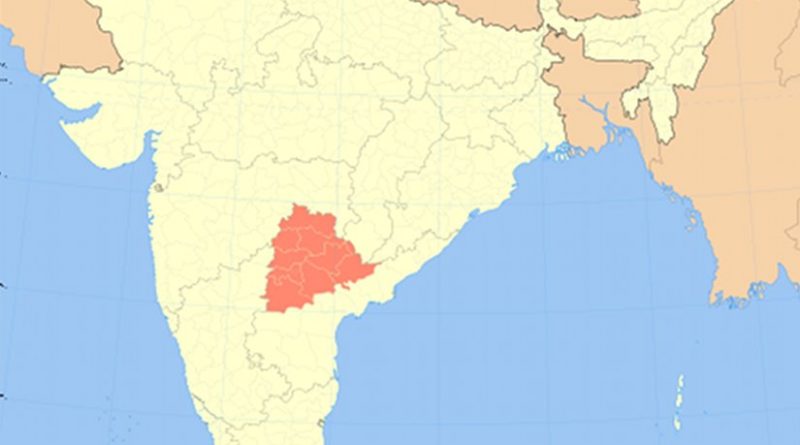 Location of Location of Telangana in India. Source: Wikipedia Commons.

The Communist Party of India-Maoist (CPI-Maoist) abducted six local leaders of the Bhadrachalam division of Telangana State’s ruling Telangana Rashtra Samiti (TRS), including constituency in-charge Maane Ramakrishna, from Pusuguppa, a village on the fringes of forest in Charla mandal (block administrative unit) in Telangana’s Khammam District, late on November 18, 2015. The TRS leaders had reportedly gone to the village to discuss about Government’s scheme to build two-bedroom houses in the village. A letter issued in the name of Maoist ‘spokesperson’ Jagan listed three demands – stringent action against Police officials involved in alleged “fake encounters”, immediate halt to combing operations in the entire tribal belt spanning Adilabad and Khammam Districts and an end to “fake encounters”. The Maoists warned of “serious consequences” if their demands were not met. They also accused the TRS Government of repressing people’s movements and pursuing “feudal and pro-imperialist” policies.

The TRS leaders were, however, abruptly released by the Maoists near the Chhattisgarh border within Khammam District on November 21, following fervent appeals by their families. The Maoists, however, reportedly issued a renewed warning to persons at the helm of affairs against “fake encounters”.

Earlier, an Assistant Beat Officer of the Forest Department, identified as Bukya Mohan, had been abducted by the Maoists from Chennapuram village in the Charla mandal of Khammam District late on November 9. Mohan along with his colleagues, had gone to the village, located on the fringes of the forest in connection with his official duties when the incident occurred. Less than 24 hours after being whisked away, however, he returned home safely.

Meanwhile, in the East Godavari District of Andhra Pradesh, Maoists had abducted Isaac, son of a pastor, from Yetapaka on October 31, after they failed to abduct his father Kannaiah. Three pastors from the neighbouring villages later went to the forest to persuade Isaac’s abductors to release him. Rumours emerged that they were also abducted. However, on November 12, Police disclosed that the pastors had returned to Yetapaka along with Isaac earlier in the day. According to the Police, Maoists freed Isaac unconditionally. Police had attributed Isaac’s abduction to the arrest of Eruvu Siva Reddy, CPI-Maoist ‘State committee’ leader, who was arrested on October 11 from Yetapaka in the East Godavari District.

The Maoists had also abducted three local leaders of the Telugu Desam Party (TDP) of G.K. Veedhi mandal from their homes in Kothaguda village in the Visakhapatnam District of Andhra Pradesh (AP) on October 5. TDP is the ruling party in AP. The Maoists demanded that the Government make it clear that it would not exploit the bauxite resources in the Agency, and that TDP men would quit the party and join the agitation against the proposed mining.

After some grandstanding and a few threats, the Maoists finally handed over abducted TDP mandal unit president Mamidi Balayya Padal, party senior leader Vandalam Balayya and District Committee member Mukkala Mahesh to the Girijan Employees’ Association leaders, on October 14, after holding a Praja court (People’s court) in an interior forest area in Chitrakonda, Odisha. The Maoists announced in the Praja court that the TDP men were being released on ‘humanitarian grounds’ following appeals from the Girijans (tribals), political parties and former Tribal Welfare Minister M. Manikumari. The released leaders were told strictly not associate themselves with any political party and should involve themselves in the ongoing anti-bauxite mining agitation with their fellow Girijans.

At the Praja court, the Maoists had reportedly declared that they had to resort to these abductions since the people’s voice against the bauxite mining proposal was being stifled and the Police had made all efforts to disrupt the meetings organised by the YSR Congress and Left parties at Koyyru and Darakonda respectively. Maoists also opposed the plans of erecting more cell phone towers in the Agency and to open petrol filling stations at Sileru, Peda Bayalu and G.K. Veedhi. The petrol pumps were meant to provide fuel to vehicles engaged in bauxite mining activities, the Maoists contended.

According to the South Asia Terrorism Portal (SATP) database, undivided Andhra Pradesh, and after its bifurcation both AP and Telangana, had recorded very few incidents of abduction over the past years: one each in 2005, 2006, and 2007; eight in 2008; none in 2009; two in 2010; two in 2011; one in 2012; none in 2013; three in 2014; and five, thus far, in 2015. Significantly, most of the abductions were either ‘unspecified’ or for specific reasons like allegations of being Police informers. However, in the recent abduction of TDP leaders in Andhra Pradesh and TRS leaders in Telangana, the Maoists laid out specific demands before the respective States Governments for the release of the abducted persons. While the Maoists kept the TDP leaders hostage for seven days and TRS leaders for two days, the hostages were released in both cases for reasons other than the States meeting their demands.

The Maoists had gone ahead with the abductions, despite the 4th Central Committee meet resolution that made it clear that no abductions should be carried out for political and economic demands. The Maoists resolved,

We must not put political and economic demands when we take up this struggle form [‘arrest of political prisoners’, i.e., abductions]. We must not take this up with the view of exposing the Government politically (for propaganda). Doing so would send wrong signals to the fighting people. Any struggle form taken up by us should aim to mobilize the people as much as possible. Even while getting the political prisoners released we must primarily try to mobilize the people and take up the struggle even while utilizing the lawful opportunities.

It is interesting to take note of the Andhra Pradesh Government’s action in the wake of the abduction of TDP leaders. After the release of the abducted TDP leaders on October 14, the AP Government came out with a Government Order (GO) on November 5, permitting bauxite mining in the Agency area in direct contravention of the Maoist demand. As expected, this created a furore in the area engineered by opposition political parties, and human rights and girijan organisations. Responding to the protests, the AP Government put the proposed mining plan on hold on November 16. In other words, the State has not committed itself to abandoning the proposal for bauxite mining in the Agency area, though it has yielded to opposition pressure to defer the project. Not surprisingly, the Opposition is demanding the scrapping of the GO.

Bauxite mining in Agency area has remained a contentious issue in Andhra Pradesh. The Maoists have been trying to exploit the situation to their advantage by taking a strong stand against permission to start mining. In fact, AP Director General of Police (DGP) J V Ramudu expressed apprehensions that the bauxite mining issue could spur Maoist efforts to regain their lost ground in the Visakhapatnam Agency, though he added that the Police was ready to face the situation in such a case.

The actions of the AP Government make it clear that the State is confident of dealing effectively with the remaining traces of Maoist activities in the State. In fact, the State has not lost any Security Force (SF) personnel to the Maoists in 2015 (till November 22), as was the case in 2014 and 2013, while the Police killed one Maoist cadre in 2015. The Maoists have killed five civilians in this period. In 2014, the Maoists killed five civilians and suffered five fatalities. Crucially, 112 Maoists have surrendered in AP in 2015, till date. The State has also made 42 arrests, including a CPI-Maoist ‘State committee’ member and ‘secretary’ of the party’s Khammam District committee, Eruvu Shiva Reddy alias Kiran (38), from the East Godavari District, on October 11.

In Telangana too, the Maoists are making fervent attempts to a shadow of their earlier dominance. After a gap of a decade, the first killing of a civilian by Maoists took place in Tiryani mandal (Adilabad District) on October 30, reportedly by a dalam comprising 10 to 14 armed extremists. However, total civilian killings by the Maoists were down at two in 2015, as of November 22. Significantly, while the SFs have not suffered any casualties, two Maoists, both new recruits, were killed in an encounter on September 15, 2015. Further, a new recruit, Kodamagundla Vivek (19) of Suryapet in Nalgonda, was killed near the Chhattisgarh border.

The recent spate of abductions by Maoists in Andhra Pradesh and Telangana are part of increasingly anxious efforts by the Maoists to engineer a revival in their erstwhile areas of dominance, but have failed abysmally, exposing and underlining their increasing weakness.