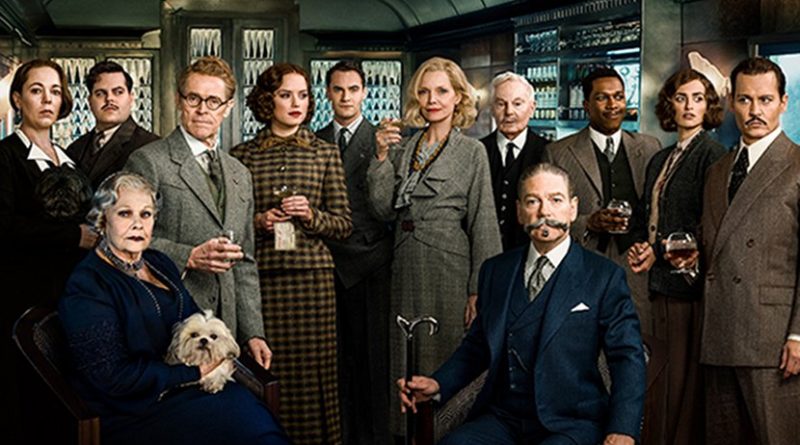 (FPRI) — Murder on the Orient Express may not strike most people as political. A 1934 novel by Agatha Christie, the most successful American novelist of all time judging by books sold (albeit she was born and lived abroad), it has been famously filmed in 1974, directed by Sidney Lumet, and filmed repeatedly since—in 2001 as a made-for-television film, directed by Carl Schenkel, in 2010 as a made-for-television film directed by Philip Martin, and now in 2017 as a full-scale film directed by Kenneth Branagh. The 1974 film, with Albert Finney as Christie’s famous Belgian sleuth Hercule Poirot leading the star-studded cast, long set the standard for public perceptions of the story, and helped lead to mixed reviews for the 2017 film. The Atlantic found the latter “inert” and the Times (of London) only gave it two stars.

The intention here is to suggest that the reviewers, apparently expecting a reprise of the 1974 version and not really understanding Christie and the political culture of her novels, are somewhat missing the point. The latter point is best encapsulated in the review by Francesca Steele in The Spectator on November 4, 2017. In an otherwise thoughtful review, headed “The death of cozy Christie. Directors are taking Agatha Christie to increasingly dark places – and about time too,” she comments on the new film’s departure from Golden Age coziness: “The jewels, parties and exotic travel of the 1920s Golden Age; the quiet reserve of the English countryside village.”

Well, if you think those are the hallmarks of Agatha Christie’s work, you should perhaps try reading her again. Many of her early novels are resolutely set in the Cold War launched by the Bolshevik Revolution. In The Big Four (1927), a Poirot adventure grotesquely misrepresented in the David Suchet BBC 2013 television version, one character discusses “the world-wide unrest, the labor troubles that beset every nation, and the revolutions that break out in some,” and suggests “There is a force behind the scenes which aims at nothing less than the disintegration of civilization. . . . Lenin and Trotsky were mere puppets.” Christie saw technology as at the service of this force: “a concentration of wireless energy far beyond anything so far attempted, and capable of focusing a beam of great intensity upon some given spot . . . atomic energy,” so that the Big Four of the story could become “the dictators of the world,” with their base in the mountain vastness of the Felsen labyrinth in Switzerland. Poirot (of course) eventually thwarts them, but the threat is very real.

Li Chang Yen, the chief villain of that piece, a real Fu-Manchu, is scarcely the isolated murderer of polite society. Nor is this a one-off. Bolshevik conspirators are found in other Christie works of the 1920s, as in the first Tommy and Tuppence adventure, The Secret Adversary (1922), in which the Bolsheviks are linked to the IRA, to left-wing unions, and to a traitor within. Moreover, the theme of global conspiracies continues. In Passenger to Frankfurt (1970), Christie warns of “The Ring,” a global network that moves armaments, including germ warfare weapons, to anarchist forces that overlap with neo-Nazis and “Youth Power.”

Order is precarious at every level in the works of Agatha Christie, a theme also found in the Sherlock Holmes and James Bond novels. Murderous drives, not quiet reserve, are found in countryside villages, as is repeatedly pointed out—but those very murderous drives are indications of the global threats to stability that can lurk in even the staidest Cotswold country house.

Which leads us back to Branagh’s new film. As in the novel, Poirot is an ally of the Western imperial presence, trying to maintain justice and order in the difficult world of the Middle East. In the novel, it is the French in their Syria mandate; in the film, Poirot’s skill defuses a threat to Britain’s Palestine Mandate, while at the close he is summoned to deal with a murder in Egypt.

Rather like Timothy Dalton’s portrayal of James Bond (a portrayal closest of the film versions to that in the novels), Branagh offers a darker, more complex, and more troubled Poirot. As Branagh pointed out in Inverse on November 10, 2017, he addressed the difficulties posed by Poirot’s insistence on justice, an insistence underlined by Christie. This brings his film version to a much more interesting close than that the 1974 version.

The idea of an engagement with politics in future films is worth considering. It will doubtless irritate viewers who seek to escape the present world in Golden Age “escapism.” But those viewers are missing the important undercurrents in those classic works. In practice, as Martin Edwards pointed out in his perceptive study of the Detection Club formed in 1930 by British mystery writers, including Christie, Sayers, Chesterton, Bentley, Croft and Rhodes, simple escapism was not the nature of the writing of the period. Instead, they focused on an engagement with the issues and problems of the day, albeit frequently presented through a location in crime.

This provides a way to look at recent versions of Christie. It is not a case of taking her “to a darker place.” She was always there.

About the author:
*Established Professor of History at the University of Exeter and Senior Fellow at FPRI, Jeremy Black has published many books, including The World of James Bond: The Lives and Times of 007, The British Seaborne Empire and The Power of Knowledge.

Home » The Defense Of A Just Order: Reflections On The Orient Express – OpEd